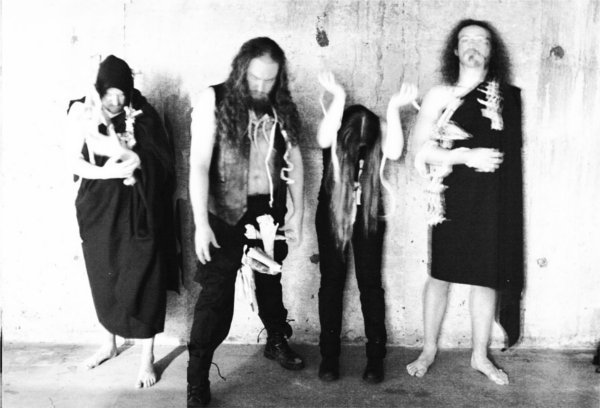 With ‘Through the Cervix of Hawaah‘ impending through the inimitable Profound Lore Records this fall, Antediluvian are set to spread their unique sound and aesthetic further into the broken rungs of the underground. With a number of sought after demo cassettes to their name,  as well as the respect of many behind them, this fall will mark the the debut full length for a band now in its sixth year of existence. LURKER dug in head first with an inquisition aimed at expectations, philosophy and purpose. Featuring a new track (Scions of Ha Nachas (Spectre of the Burning Valley)) and new label, Antediluvian are set to reclaim the regressive death metal tag with a virulent, informed set of beliefs that set them on a different plateau altogether.

-Care to elucidate Antediluvian’s purpose as we approach the dawn of your full length release?

We are a blasphemous entity, channeling destruction and doom from beyond.

Regarding the upcoming full length: We propose to embrace the regressive tendencies in death/black metal while simultaneously destroying stagnant norms in the spirit of genuine lurkers at the threshold.

-What sparked the move away from the black metal sound of your early demo’s to the darker realms of death metal?

When you look back at all the satanic and morbid music that has ever been made from Von to Abigor to Morbid Angel it should be evident that there isn’t a particular “black metal” or “death metal” sound that can be easily defined. Therefore I think it makes slightly more sense to label bands based on their thematic elements if at all. Personally I think black metal is aggressive, dissonant, satanic themed music…

We have always had the same channeling process with song writing, external circumstances have affected the sound more than any particular attempt on our part to sound “black metal” or “death metal.”

-What themes are at play on the full length? Do you see this as an opportunity to expand on Antediluvian’s philosophy or instead to continue those on your demo releases?

The full length specifically deals with the adversarial bloodline described in the Hebrew bible as the ultimate corrupting force hindering the protagonists of the Old Testament. It is also a chronologically reverse reflection of the accounts of the creation of matter and consciousness as described therein (in the Hebrew bible).

Every release is an opportunity to write about the same theme: inversion, illusion, and the cracking of the veils of mind and matter.

-You have said that the upcoming album will mock the morality we ascribe to and the bible. Will this idea diverge much from the over-trodden path laid down by the magnitude of other death/black acts?

Visually, we don’t use the same common imagery, though we share influence with many artists who do display goats etc prominently. Similarly the way we present our lyrics is a bit out of “left field.” We are using well researched but less common terms to talk about many of the same ideas that satanic music has always embraced, especially themes of a particularly biblical bent. As I mentioned in the last response, this album specifically deals with the adversarial entities described in the Hebrew bible. Apart from the being described as “ha satan,” the main focus of the lyrics delve deeper into the idea that there were other evil supernatural beings subtly described in the Hebrew Bible.

One example is Azazel, mentioned in conjunction with sacrificial law in Leviticus and later linked with the origins of war and sexual abomination in apocryphal texts… Azazel can basically be seen as a source of all the “goat warrior worship” imagery associated with extreme underground metal, so in that sense it’s nothing new, though I’m not sure how many are aware of the more intricate details of the story behind these characters. The link with sexual sin and Azazel/the watchers described in 2 Peter 4-6, while part of the New Testament and not the Hebrew Bible, aptly sums up the reason we called our song dealing with Azazel “Gomorrah Entity.” This passage is also one of the pieces of writing that helped us originally decide what our band name would be.

In the Hebrew bible, the perpetrators of the same blasphemous acts are presented as the mysterious “bene ha elohim,” members of the divine council mentioned in Job as having been present at the time of the creation, and are also mentioned as the perpetrators of the blasphemous coupling with human parents to produce the abominable race of the Nephilim. Our lyrics emphasize some of the other tribes who were the product of this line and were at war with the Hebrews. The Hebrews were commanded by their god to wipe these specific tribes out completely as they were of an “unnatural” or “unearthly” bloodline. As a lyricist I’m fascinated with the idea that the bible actually perpetrates the descriptions of these “evil” gods that existed before creation as part of the same literal truth as YHVH and Jesus etc, and also with the kind of demonizing view of their offspring, the “other” races that the “chosen people” attempted to systematically exterminate in order to regain the promised land.

-You refer a lot to ‘interpreting the unknown’ in previous interviews. What exactly do you mean?

We mean looking beyond the obvious surface reflections and interpreting the hidden meanings below.

-How does the full length build on tracks laid down in your back catalogue? Can you tell us a little bit about the development of sound.

There is no conscious effort to develop our sound. As we continue to write songs, our bodies become physically able to express our channeling in stranger ways. We are always evolving back to the same particular pre-starting point…

-Will we see any new musical elements introduced?

It’s pretty much the same as always, though we have a 4 piece line up so the sound is thicker and there is a person dedicated specifically to bass which has made things quicker and better in my opinion. We don’t really attempt involve anything new, as opposed to just being vessels for the music. We let the songs direct our process more so than vice versa.

Spin ‘Scions of Ha Nachas (Spectre of the Burning Valley)’ from the upcoming full length:http://www.youtube.com/watch?v=jBApsajvITg

-What do you make of the current bestial/suffocating/old school death metal revival?

Well I like a lot of this stuff personally. There are many great bands out there. I like thick ugly vocals and production, and I like music that is hard to predict. Obviously then a lot of these bands fit my taste, more so than those from other genres of metal.

-Why choose death metal as a framework over other sub-genres in metal?

We didn’t choose death metal nor did we ever label ourselves death metal. I think if anything we should be called black metal because of the satanic elements we are based in. I am not overly concerned with labels though. Apart from that, I obviously just really like certain sound forms, I do feel they tear the walls of existence at times.

-Do you listen to a lot of metal? Care to list some artists you have enjoyed in or outside of the sphere of metal?

Don’t really care to list bands, personally I like bands that sound destructive, oppressive, experimental, degrading, regressive, absurd, etc. Genre labels are not as important to me as a genuine creative/destructive aspect to the sound and ideology being presented.

-I feel like your philosophy has a strong focus on internal factors, like genetics, base instincts, the reptile brain. What does Antediluvian think of the external and the vast cosmos that completely engulfs our surroundings?

I think it’s all the same really… The imagined separation between microcosm and macrocosm is keeping people feeling safe and sane but when we die we lose that imagined separation. This loss of separation is perhaps what people thirst for in a transcendental experience.

As far as genetics/reptile brain, I find it interesting to consider the difference between a human’s idea of life and a creature that is basically a long tube with teeth for eating at one end, a hole for shitting at the other, and has the ability to reproduce. Is it any wonder people are so frightened of such a simple representation of the ultimate purposes of material existence…?

-Given Antediluvian’s purpose and idea, what comes to mind when you hear about the last remaining uncontacted tribes in the rainforest bordering Peru/Brazil and the deforestation/ldogging companies that wish to mindlessly erase this forest and their home?

I don’t harbor romantic ideals about this sort of thing… Change and death are the only things certain to living forms. Attempting to slow these processes delays the inevitable and often causes more discomfort and awkwardness than otherwise.

-What does the future hold? 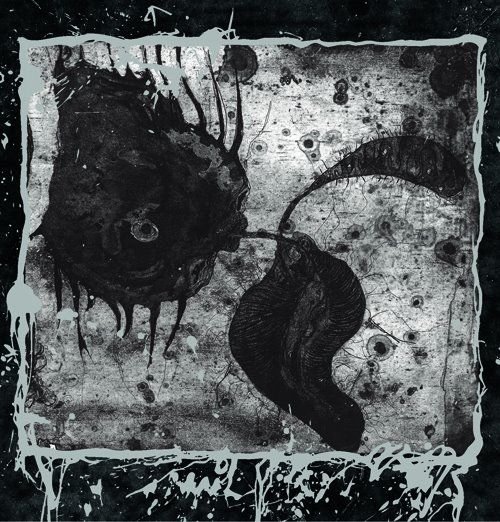 Your thoughts on the following…

-The transvaluation of all values: This must have been useful for someone…

-The society you live in: Great.

Expect ‘Through the Cervix of Hawaah‘ to drop later this year through Profound Lore.  If the wait seems to much, pick up the demo compilation ‘Watchers’ Reign‘ from Invictus Productions and ‘Revelations In Excrement’, the latest demo material, from Bird of Ill Omen Recordings.