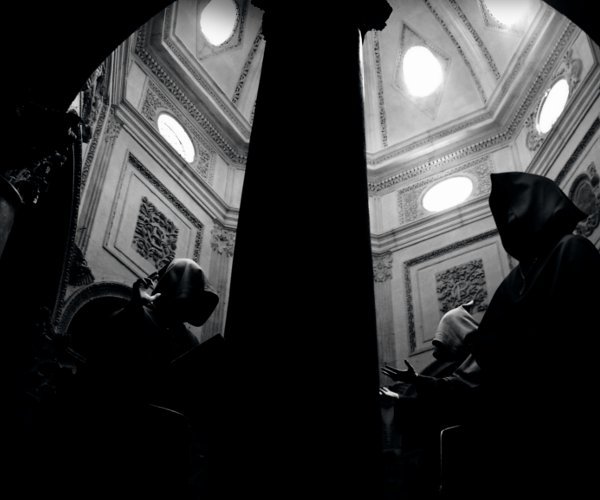 Blut Aus Nord’s early days were spent composing sublime visions of icy tundras, insurmountable winters and the harsh realities of nature. ‘Ultima Thulee’ and ‘Memoria Vetusta I’ are genre classics, hearkening back to the work of Burzum with furious tremolo picking and majestic keyboards. The atmosphere is dense and riddled with the feel of winter, comparable only with the highest rungs occupied by bands like Paysage d’hiver and Lunar Aurora.

Since those fledgling days, it didn’t take long for the ideology of Blut Aus Nord to swing to greyer pastures. Entwining elements from industrial music with their uniquely atmospheric take on black metal gave birth to an untapped form of industrial black metal that would eventually become their own. This was cast in iron on the release of ‘The Work Which Transforms God’ where urban nightmares sprawled forth from the sewers of the cities and the zombie like un-awakening of modern man took center stage.

2009 marked the release of ‘Memoria Vetusta II: A Dialogue With The Stars’ and with it once again a switch both in meaning and sound. The cosmic horizon was now within Vindsval’s reach. ‘Memoria Vetusta II’ combined melodies of enlightened grace with the organic, industrialized juggernaut that the band had solidified into with ‘MoRT’ and ‘Odinist’. The stars took center stage as the band relieved their homage to nature so apparent in ‘Memoria Vetusta I: Fathers of the Icy Age’.

Memoria Vetusta literally translates to ‘Memory of the Ancients’ and could reflect a reminiscent look into past systems of belief – when religion was nothing more than a pagan searching for truth and meaning in the vast cosmos, in thrall of his surroundings, unabated by fellow man, capitalist greed or the greywash ennui of modern life.

The development of a philosophy within the music of Blut Aus Nord is easier to trace than other extreme metal acts. For one, the music does well to echo the sentiment of each release. There are clear cut differences between the muddled frenzy of ‘MoRT’ and the deliberate, open refrains catered for on ‘Memoria Vetusta II’. Secondly, Blut Aus Nord are rarely cryptic. While they don’t shout their ideas from the pulpits in an attempt to make everyone aware of their vantage point, the information they do release is sparse. Lyrics are scarcely revealed. Releases never come saddled with liner notes. The tracing and interpretation of ideas relies on the sound of each release, and the microcosm of words that accompany them. 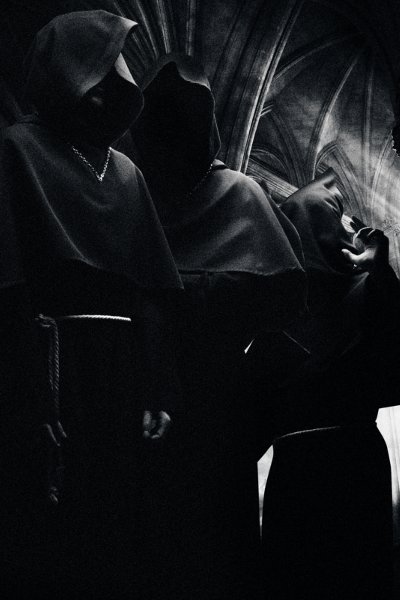 The 777 trilogy, ‘Sects’, ‘The Desanctification’ and ‘Cosmosophy’, represents a grand amalgamation of the band’s philosophy. We begin with ‘Sects’, a period of declaration on impeding apocalypse, the undoing of man’s beliefs. These hymns of deconstruction on the first opus in the trilogy act to strip bare the age old illusions of life and existence. The tortured, hypnotizing chords are contorted to their extremities while the mantra of howls, shrieks and uneasy beats represents the un-fastening of every sect from every belief system. It is Blut Aus Nord’s grand reflection on the human condition before coming to the conclusion that existence is no more than a nebulous concept; knowledge and wisdom just fading delusions. It is a ostentatious declaration of apocalypse. That moment when man realizes he is but flesh and bone reliant on a dying sun.

As if the sublime nature of ‘Memoria Vetusta II’ gave birth to an unconquerable sense of absurdity. Sects‘ punishing, obombrating structure reflects the bleak infinities of nature:  ‘in some remote corner of the universe, poured out and glittering in innumerable solar systems, there once was a star on which clever animals invented knowledge. That was the highest and most mendacious minute of “world history” — yet only a minute. After nature had drawn a few breaths the star grew cold, and the clever animals had to die. One might invent such a fable and still not have illustrated sufficiently how wretched, how shadowy and flighty, how aimless and arbitrary, the human intellect appears in nature. There have been eternities when it did not exist; and when it is done for again, nothing will have happened.’

The second part of the trilogy, ‘The Desanctification’, eschews the speed, violence and malice central to ‘Sects’ in favour of sorrowful moods, disconcerting vista’s and mantra like psychedelia. It is a voyage through the black hole, an acceptance of the grand undoing conjured in by ‘Sects’. Desantification is the act of rendering something illegitimate, removing respect. Thus the second voyage in the 777 trilogy seeks to actively destroy the sects, the belief systems, the culmination of culture, knowledge, wisdom and truth. ‘The Desanctification’ is man stripped bare of his historical and cultural surroundings. Free of idols, politics, capitalism, philosophy and reason. A blink in the direction of nihilism, as the celestial being is stripped bare, reality is altered amid irreversible illumination.

‘The Desanctification’ is the moment when man finds himself embracing the unbearable solitude of a deconstructed world void of all spiritual and material elements (literally, desanctifying man – removing the legitimacy of man). This sublime idea is echoed perfectly in the wandering chord progressions and soaring, lofty melodies that are littered over the album.

From here, only ‘Cosmosophy’ remains in the trilogy. Strictly speaking, ‘Cosmosophy’ is the study of the universe. I would expect to see Blut Aus Nord rising from the ashes of ‘The Desanctification’ to build on the themes and create something that parallels ‘Memoria Vetusta II’ in terms of melody and scope. The recurring themes that nature is the sublime, beautiful element and that man is the pestilence are millennia old. A trilogy with a hidden analogy to our modern life, 777 is the announcement, undertaking and end of modern man: an escape from the shackles of your 9 to 5 to embrace cosmic wonders and freedom on an unimaginable scale.

With 777, Blut Aus Nord are painting a picture that everyone can appreciate. In terms of artistic merit, very few extreme metal artists can compose and negotiate this kind of ideology without resorting to pamphlets or over-analysis by the fans. This is the music the New Yorker should be writing about. It is intelligent, well informed and subtle in its approach. True, informed art that offers so much above and beyond other music released this year. 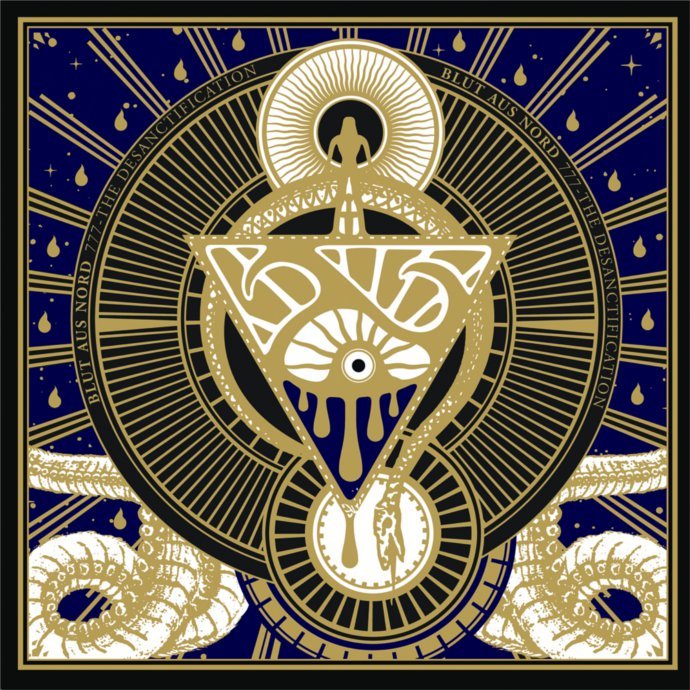 ‘The Desanctification‘ is available through Debemur Morti as CD and LP November 11th. This label has a lot of good releases set up over the course of the next few months – so watch out!
The first part of the trilogy, ‘Sects‘, is also available.