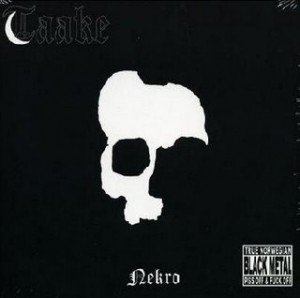 I’ve never been the kind of metal fan to let genuinely offensive lyrics get in the way of my listening. In fact, I’m fairly suspicious of anyone who refuses on principle to expose themselves to art of a morally threatening nature. If you’re the impressionable type and you suspect that listening to Kataxu will poison your mind with Nazi-mystic race hate, then fair enough, delete that .rar file before it starts spewing swastika-shaped space-swords all over your desktop. But after years of filling my ears with the barkings of incorrigible bigots, I find I’m just as impervious to the allure of rape, murder and racism as when I was a teenager listening to Refused and Million Dead.

I’m slightly surprised, then, to find myself seriously pondering a problem of this kind. On Wednesday the UK Lurker crew (and hopefully a bunch of our readers) are off to see Taake in London. Since Taake are one of my favourite bands, it would be great if I could sing along to some of the songs. But unless you’re a Norwegian speaker, the Taake fan’s only real hope is to throw in a well-timed ‘UGH!’. The band does have one potential sing-along song, though: ‘Voldtekt’, off the Nekro EP. With its memorable refrain of “Voldtekt!” (meaning ‘rape’, or literally ‘taking by violence’), this live favourite gives us foreign fans the perfect chance to scream along. But then there’s the other side of the coin. The whole of the Nekro EP, apart from the Von cover, seems to be telling a pretty nasty story: a man takes a woman into the forest, rapes her (in ‘Voldtekt’), tortures and kills her, then carries on abusing the corpse (in ‘Hennes Kalde Skamlepper’). It’s not easily to tell whose perspective ‘Voldtekt’ is told from, but either way it certainly glorifies the event, as the song ends with a disturbing paradox: ‘Rape with death to follow, to find out, honestly, if you’re alive’. Hoest makes it all the harder for his apologists by kicking the song off with the words ‘A little something for the ladies’.

Gutting as it is, I don’t think I’ll be singing along on Wednesday. There’s nothing noble at all in my refusal to do so, no carefully thought out standpoint: it’s just a gut reaction, a moral horror at the idea of joining in a song that glorifies rape. If I’m happy to scream along to ‘Christraping Black Metal’ in the car, or to read Ovid’s Metamorphoses for pleasure, does that make me a hypocrite, a coward, or a poseur?