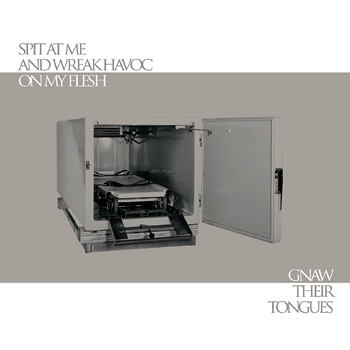 Given the thoroughly uncommercial nature of the music we cover here, becoming a “household name” in this environment is quite the achievement. Yet one man’s resolute vision has afforded him this luxury whether he likes it or not. The prolific Mories de Jong has long been active within the scene, playing in numerous bands and under many different titles, but it’s arguably the black metal/doom/noise/industrial amalgamation Gnaw Their Tongues which has received the most recognition and attention. More rabid and disturbing than anything else in de Jong’s armoury, the first recorded effort by this project has finally been made available once again by Irish upstart label Ominous Silence.

Originally self-released as a CD-R back in 2006, longstanding followers probably know what to expect from Spit At Me And Wreak Havoc On Their Flesh, but for the uninitiated, the works of Gnaw Their Tongues are unequalled documents of darkness, death, perversion and terror, and this debut does well to set the foundations for what the project would evolve into.

Fans who, like myself, have never had the opportunity to hear this record are in for a treat. The monstrous bass tone that defines Gnaw Their Tongues’ sound threatens to completely engulf the listener, let alone the punishing drum machine, deranged vocals and bizarre samples that pepper Spit At Me… It’s mostly a slow-burning release – sluggish guitars snarl over a fluid percussion section, which crashes with surprising precision within the album’s free-flowing vortex of hatred.

But there are moments of the black metal ire that fuels de Jong’s less abstract outfits, such as De Magia Veterum or more recently Cloak Of Altering. For instance, the namesake track ‘…Gnaw Their Tongues In Pain’ features clattering blast beats and a stomping bass distortion beneath an emotionless bible reading. Following that, ‘Healing Open Wounds With Salt’ is a thrilling ride, being the closest thing to the black metal thoroughbred de Jong has ever written, predecessor projects not withstanding.

Samples have been a fixture of Gnaw Their Tongues from the very beginning, and here they are among the most sinister, spiritual and morbid. A recurring robotic voice scrapes through many bible excerpts, but of course de Jong has selected only hopeless and sickening fragments, rife with strange allegory and archaic rituals. His cold, detached comments on modern life also infiltrate Spit At Me… with the closing track, aptly named ‘Death, Suffering And Death’, featuring an extremely skewed drug confession from a former prostitute.

Each time I listen to a Gnaw Their Tongues release – and I confess this not a frequent occurrence – I am left unsure as to whether they are celebrations of the evil in man or laments. But it is this uneasy juxtaposition that keeps me coming back. Ominous Silence has done a great job of revamping the album, too, with a stylish reinterpretation of the original artwork, a solitary corpse container, on a carton sleeve. Of course, Gnaw Their Tongues isn’t for everyone, but this first emission from a now underground hero is a compulsory purchase for the sick fucks that seem to follow de Jong’s every movement.