What’s the formula for the perfect split release? This question has popped into my mind every time I’ve put on the aptly-named Undertaker EP, a split effort between Undersmile of Witney, Oxfordshire and Winchester’s Caretaker. In its early days, the split format offered young acts a cheaper way to get their music in print, as the costs of recording and pressing could be shared between the bands. It also offered more established bands the chance to bring some new talent to their fans’ attention. Nowadays things are very different: new bands can build themselves a reputation and fanbase online without having a physical release or ever setting foot in a studio. You might think this change of dynamic would leave the split format obsolete; but releases like the Undertaker EP are proof that the split is as potent a medium as ever.

It’s a big claim, but I think these two bands may have found the perfect recipe for a split. I’m not saying this is the best material to appear on any split ever. It’s more that the pairing is just perfect. I’ve come to the conclusion that the best splits aren’t between bands with a similar sound, or even a contrasting sound. That’s not what does it for me. The perfect split, in my book, presents two bands where you feel there’s some common ground uniting them, but you can’t quite put your finger on it. With every listen you try to puzzle it out. It’s not down to shared members, real-life friendship, or common influences, but something a bit deeper than all that, something that makes the bands click, despite their differences. This is one such split: Caretaker and Undersmile are coming from very different directions (more on that in a minute), but somehow sound joined at the hip. This dynamic is perfectly reflected in the interlocking horse and rook on the EP’s cover (colossal hat tip to artist Zubair Chaudhry). 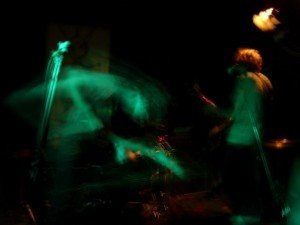 Caretaker begin the proceedings with two tracks of post-hardcore with some great math rock and AmRep-y/Botch-y influences, that reminds me a bit of the early work of local Oxford bands Youth Movie Soundtrack Strategies and The Edmund Fitzgerald. We get one dose of driving, nearly-instrumental math rock (‘Yeehah!’) followed by the more brooding ‘Inexorable March’ (a nod to the aforementioned YMSS, maybe?), which builds over seven brooding minutes to an explosive, chug-fuelled finish. Michael Woodman’s clean vocals add a nice dimension to the song and keep things interesting over the lengthy build-up. I look forward to hearing more from these guys next year.
The two songs here from Undersmile are masterworks of sludge-tinged doom.

Their previous EP A Sea of Dead Snakes had sounded like a cross between Alice in Chains and The Melvins (thanks to Rich for the description), but on this split things have got a lot slower and darker. Resounding doom riffs are the driving force behind these songs, acting as huge waves for the languid (and downright disturbing) vocal duets to drift upon. Frontwomen Taz and Hel have a truly unique way of delivering their sickly harmonies that sounds half mournful, half drugged. They’re supported by an expert rhythm section, featuring one of the finest bass tones I’ve heard this year. ‘Anchor’ is the better cut (by a hair’s breadth), with its opening atmospherics giving way to an unnervingly serene chorus and hobbling, seasick waltz.
This is one split I’ll keep coming back to, and will keep trying to work out what it is that unites these two very different bands. I suggest you do the same (the Undertaker EP is available here for only £4). It’s more than enough to tide us by until the two bands release their full-lengths next year.

Catch Undersmile live at the Wheatsheaf, Oxford (alongside Wiht, Desert Storm, Caravan of Whores, Dead Existence and more) on 10 December and again on 4 February (with Sigiriya, Desert Storm and Proserpina). Keep an eye on their Facebook page for more bookings early next year.