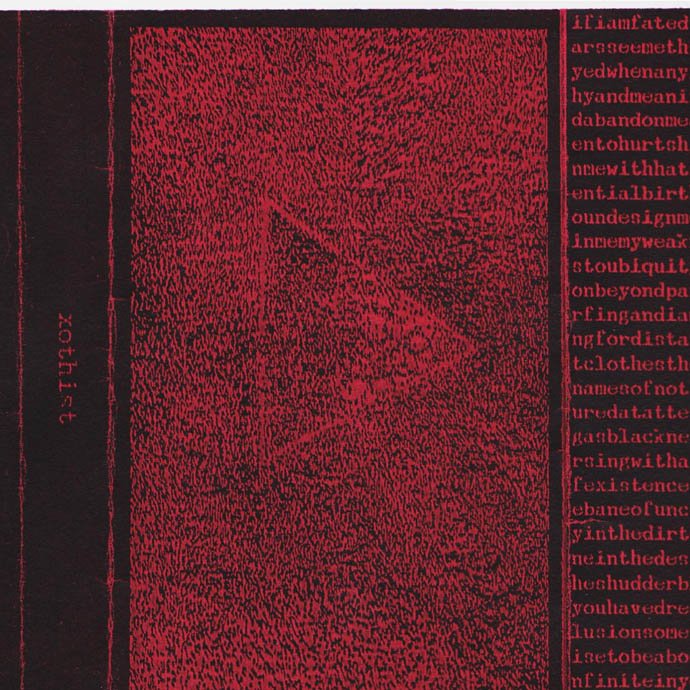 Xothist deliver bleak and colossal black metal that tethers the arteries and capillaries from black metal’s bastardized sub-genres into one uniquely gleaming gem. You will hear brief moments of depressive deliverance. Driving rhythms that set mountain vistas in the deep orange hue of a falling star. Ambience scaling deep space against visions of supernova and lifeless debris. Contextually similar to Darkspace’s cosmic hymns of nothing and the hypnotic battering ram of Malefic’s better work, this six-track demo tape is a pandora’s box in waiting for any self-respecting fan of the bleak and oppressive.

Strong stuff. A welcome reminder that there is yet hope and potency to this oft-imitated strain of black metal. The feel of unease is maintained throughout by juxtaposing hypnotized, unorganized segments of hellfire with pinpoint bombardments of lead-riddled cathartic rage. There are moments of refrain too, of course, although sheltered and frail. The ominous, trebled-out, noisome sections of metal meet haunting ambience and restrained, almost clear guitar leads. As varied as a black metal demo can get.

Xothist is the crude, undigested remains of the American abyss circling the drain. The last ditch efforts of a hopeless voyage veering over the event horizon of some distant black hole. The unease of aligning yourself with the nothingness of existence: a futile, driving epiphany that never breaks into absurdity. Long sold out and forever cast into the treasure trove that is the underground vault. Get your fix on Soundcloud for now and pray that these negative astral projections visit Earth on another orbit, in some other time.