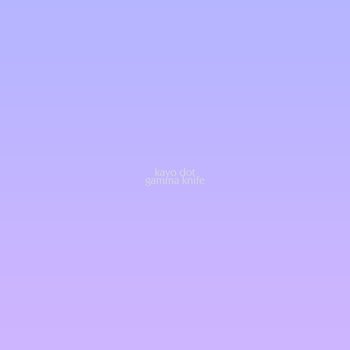 Kayo Dot released their latest album Gamma Knife today. Really there is no other purpose to this entry than to make people listen to it. Toby Driver’s ever-shifting experimental unit has been LURKER’s favourite band for a very long time, dating back beyond late-night radio shows and the hours we would spend silently spinning these albums together, only to excitedly break out in detailed discussion of what we had just heard. And not “one of” our favourites either — the favourite — for reasons that should be obvious to any loyal lurker. The endless stream of piss-poor year-end lists will never dent or distract our enthusiasm for this band.

All should know by now that Kayo Dot was born in the muddied waters of progressive and extreme metal, and although this element has lulled since Dowsing Anemone…, the tangled, textured compositions have continued to have a spellbinding effect on me. But had you been longing for the titanic heaviness of earlier albums to make a return, Gamma Knife brings welcome relief. Sticking with jazz theme that has defined Kayo Dot’s direction from Blue Lambency Downward onwards, however, it’s a slick, precise, almost-grindcore kind of heaviness – leaning towards the realms of John Zorn, Virus and other highly volatile, experimental black metal. A direct contrast with the doom-rooted plod of, say, the majestic mid-section in ‘Marathon’, from Choirs of the Eye, but all the more fascinating for its intricate whimsy and shimmering details.

There is also a tremendous sense of achievement in the music, a sort of intense yearning for the stage perpetuated by the resonance of the live band bouncing off the walls. A cheer is heard at the end of ‘Mirror Water, Lightning Night’. Whether it’s the band themselves celebrating the triumph of a taught, disciplined performance together or the appreciative whoops of some very lucky onlookers is unclear, but I share the elation with them. Elation is the end-game when it comes to music listening, hence why Kayo Dot will forever remain at the head of the LURKER pantheon.

The album fills me with waves of warm memories and nostalgia, as Kayo Dot often seem wont to do. Good times plundering dungeons and traversing mountain peaks with a trve comrade at my side, cementing friendships through a love of music, being moved to tears by the distinctive chiming of ‘Imortelle and Paper Caravelle’. Various flashbacks from the heady annals of the past six years. It makes me wish to be in the company of my best friends… And what can compete with that?

Gamma Knife is available as a download from the Kayo Dot bandcamp. A vinyl version will follow soon…