B-movie imagery has always followed metal around like a lame dog. Fortunately for Timeghoul, these four unseemly nerds from Missouri circumvented the clichés through their obvious love for sophisticated science fiction. During the mid-nineties, they converged on a primitive but cosmic strain of death metal with which they would express humanity’s horrific future in two demos, Tumultuous Travellings and Panoramic Twilight.

They went mostly unsung in their heyday, never getting to the point of making the monstrous classic album their demo material hinted at, but whether by nostalgia from the oldies or curiosity from younger generations of metal fans, Timeghoul’s legacy prevailed. The scans of gnarly, Xerox’d tape covers that eventually made their way onto the internet, followed by rips widely available for download, have prevented this valuable relic from disappearing in the passages of time. Nowadays you are bound to see much positive discussion surrounding the band. 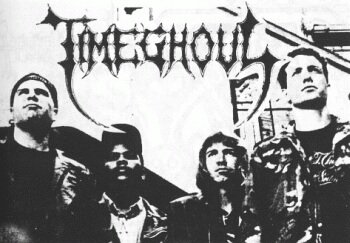 These demos have been screaming out for a re-release for years now, and finally someone has taken it on themselves to quite rightly make them available for purchase. Dark Descent Records is reviving the bloated, long-dead corpse on February 1 by appending them together in one full-length compilation. It comes at just the right time, when the death metal underground is experiencing a real resurgence in quality, and had Timeghoul survived the ’90s, there’s no doubt they would still be making the same surreal, vital and intelligent music – a masterclass in true-to-form death metal, if you will. 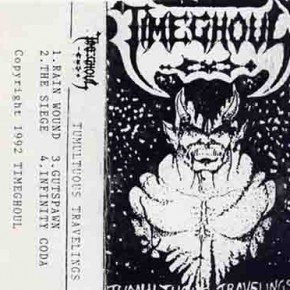 Tumultuous Travellings was the first output to surface in ’92. Delightfully raw, chunky and brutal, but with a pervading ominous atmosphere, the immense power chords and squealing technicality carry the listener on a stormy ride worthy of the demo’s title. Despite its primordial essence, the four tracks seem to gaze into very depths of space-time, seeing all things past and yet to be, becoming the perfect conduit for equally wise and thought-provoking lyrics. Sometimes chanted, sometimes sung, but mostly growled, the vocals bark portents of eternity too great for the eyes of man with surprising clarity. On the closing track ‘Infinity Coda’, amid the slow-motion crush of the band, the words ring out: “Enlightened to the point of bewilderment, deaf to the sounds of creation. Blind to the light of the afterworld, what has always been shall always be.” Then the wrathful blasting resumes; it’s incredible. 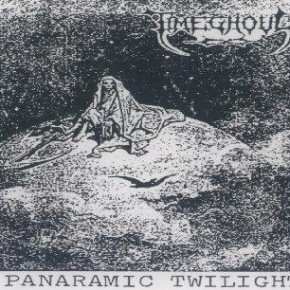 It took two years for Timeghoul to follow up with Panoramic Twilight, but at least the band had used the time to take a step forwards. The production is beefier, clearer and louder, the music standing head and shoulders above what was en vogue in death metal during that period. Two extended tracks dominate this half of the compilation, with hugely varying tones and atmospheres dragged out beyond the razor-sharp, warp-speed riffing and doomed lurches of the slower passages. Again, the vocals tell terrifying tales of alien races and pan-dimensional beings. There’s a subdued ambient section in ‘Boiling in the Hourglass’ where an imposing bodiless voice booms: “I AM A GOD, THE PRIME BEING. I WILL IMPALE YOU ON THE CRUMBLED PILLARS OF THE MILLENIA.” It makes you shit yourself, because you thought the song was over. But no, there’s another verse to go! Happy days. The final track, ‘Occurrence on Mimas’, is Transmission 82-09-04 from the imperial archaeologist Beznan on the cadaver world Earth, concerning data in the fossilised brain of the last human being. Ghostly synths bolster the established textures for this grim chronicle of our planet long after humans held sway.

It’s tragic that Timeghoul never went further than these demos, but in a way they’ve been preserved honourably. Such is the quality on show here that I wouldn’t be averse to seeing some kind of reformation, however unlikely that may be. But there are also clues as to why Timeghoul never ascended; the time between demos, the sniggering and goofing around (“QUIET DOWN, BOYS”) on the end of Tumultuous Travellings. Perhaps it was never meant to be a serious project and the members got out while they could, going on to lead perfectly normal lives. Whatever, this is a classic death metal band and a slice of history. Everyone should grab a pre-order from Dark Decent while they still can.