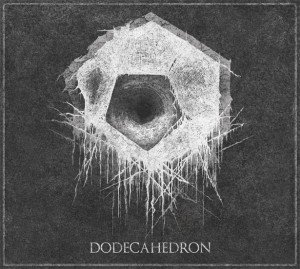 Dodecahedron first appeared within these pages under their former moniker, Order of the Source Below, in an article exploring the shadowed crevasses of the Dutch metal scene. LURKER remarked that it would not be long until word got out about this sinister force, as any who listened to the two demo tracks were immediately pulled under their spell and left gasping for more. We implored those in a position to release music to consider signing the band; such was the need to hear the 60-minute epic they claimed to had written. Now it’s been one year and a name change since our last brush with Dodecahedron, and their self-titled debut has subsequently become one of LURKER’s most hotly anticipated albums for 2012.

In the end, Season of Mist picked up the torch and could there be a better fit? The label’s stalwart acts, Mayhem and Deathspell Omega, have already done much to further the extreme metal experience, and Dodecahedron fall neatly in line with this school of volatile experimentation. It’s a comparison bound to crop up more than once within the literary cesspit of what is known as music journalism, but it’s also unavoidable. No other band has come close to scraping the same heights – until now.

The album needs to be contemplated in its entirety to get a sense of what Dodecahedron are truly capable of. From its opening moments on ‘Allfather’, angular dissonance and shunting rhythms flood the air, drowning the listener in nightmarish guitar abstraction. The music seems to be the sworn enemy of melody, as any chances for a wholesome tone are quickly snuffed by a flattened note here, a jarring squeal there. Devoid of power-chord primitivism and the shackles of melodic convention, the possibilities become endless.

Ok, so this approach is nothing new – Calculating Infinity still whispers in my ear when listening to Paracletus – but it is in those fleeting moments when the band summons an actual, bona fide tune from the surrounding chaos that Dodecahedron triumphs. Sometimes even a dark beauty emerges between the ritual hums of ‘Vanitas’ and the cinematic composition of the ‘View From Hverfell’ trilogy, the series that ends the album. But be warned: Whenever you find yourself lost in atmospheric haze or locked in a head-bang along to an almighty riff, remember that Dodecahedron has as many faces as its namesake. It’s treacherous, in league with the Dark Lord, and Pandemonium always teeters on the horizon. And it will destroy you.

Dodecahedron was released globally today (January 24). Order from their official website or through Season of Mist. There is a full stream available to check out until January 27.