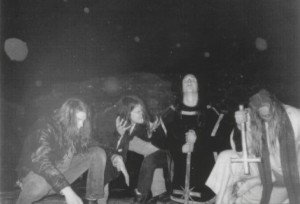 ﻿﻿The Slayer Mag Diaries may just be the finest book ever published on heavy metal. Most readers will be drawn to it as a document of the crucial years in Black Metal history: the infamous issues 9 & 10 of Slayer Zine are as important a monument of the Norwegian scene as any album, while the memoirs of author Metalion, long-time zine-writer and close friend of Euronymous, Dead and Varg, give a moving account of the rise and fall of the scene’s key players.

But the book (and the zine) have a lot more to offer than that. They are the only real document of the thriving Death Metal scourge that covered Norway before the explosion of Black Metal. Laced in among interviews with Bolt Thrower and Nihilist are bits are pieces on local bands, now all but forgotten, whose members would go on to greater fame in the Black Metal scene. Today this Death Metal scene survives as little more than a footnote in the historical conscience of metal fans. Until the dawn of file-sharing, the many demos from this scene were virtually impossible to get hold of, and would they be worth it if you did? These were only kids, after all – how good could they be? 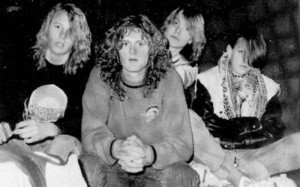 Reading Slayer, though, you soon find yourself infected with the excitement that Metalion and his more famous friends felt about this stuff. At the time, this was the new extreme metal. Reading Euronymous’ praise for bands like Balvaz made me wonder what I was missing out on. If things had turned out differently, would the scene have produced anything else on the level of Soulside Journey?

For the last few months I’ve been collecting every release from Death Metal bands whose members would go on to play a part in the Norwegian Black Metal scene. It’s a wildly varied bunch, and often pretty strange. Few of the bands may have had the knack of writing songs as memorable as their American idols, but the music is never boring, and never just a facsimile of another band’s sound. In the end I found it easy to put together a compilation of my favourite songs from each band in the scene, which you’ll find below. Treat it as a base for wider exploration, a museum-like exhibition, or just a source of cynicism-free, Bermuda shorts-hating Death Metal.

2. Amputation – Heavenly Grace (from the 1990 demo Slaughtered in the Arms of God). An early home for Abbath and Demonaz of Immortal, Amputation started off as Morbid Angel acolytes and then, on this second demo, found a deeper, more brutal sound. The atmosphere may be a million miles away from Immortal, but the riffs and stop-start drumming on ‘Heavenly Grace’ is eerily reminiscent of ‘Unholy Forces of Evil’ from the Immortal debut.

3. Morbid – From the Dark (from the 1987 demo December Moon). Evil thrashing death fronted by the venerated Dead, later of Mayhem. A Swedish band, admittedly, but with close ties (and obvious importance) to the Norwegian Black Metal scene.

4. Mortem – Nightmare (from the 1989 demo Slow Death). Hellhammer (Mayhem, Arcturus) and Sverd (Arcturus) dished out one demo of abrupt and pithy Death Metal before going on to greater things. Watch out for those vocals!

5. Old Funeral – Devoured Carcass (from the 1991 EP Devoured Carcass). The most professional (and most American) sounding band from the scene, Old Funeral present the strange prospect of Varg and Demonaz pairing up on guitars, with Abbath on bass and vocals. Oddly reminiscent of Suffocation, whose emerged in the New York scene at roughly the same time.

7. Cadaver – Twisted Collapse (from the 1989 demo Abnormal Deformity). Included here merely for historical sake, Cadaver were one of only a few bands who continued to play Death Metal long after the explosion of Black Metal. Carl-Michael Eide would eventually play in this band, but not for another decade.

8. Thou Shalt Suffer – Chimera Dimension (from the 1991 demo Into the Woods of Belial). The only band to rival Old Funeral’s claim to an all-star line-up, TSS was not only the first stomping ground of Ihsahn and Samoth, but also boasted Ildjarn on bass – a man few could imagine playing technical death metal. TSS do a fine job of balancing technicality and atmosphere, with some great synth-work from Ihsahn. As with Amputation, you can just about see the link between this band and the earliest work of its successor, Emperor. 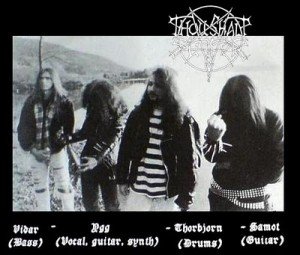 9. Darkthrone – The Watchtower (from the 1989 Cromlech demo). This is a great version of a favourite from Soulside Journey, with vocals that are actually a lot closer to the later Black Metal style. Untouchable as ever.

10. Green Carnation – Corpus Christi (from the 1991 demo Hallucinations of Despair). Green Carnation is the life-long band of Tchort, bassist on Emperor’s In the Nightside Eclipse. This stuff is a far cry from the progressive gothic metal that would follow: instead we get some tight, fairly technical fare with disgustingly distorted vocals.

11. Phobia – The Last Settlement of Ragnarok (from the 1991 demo Feverish Convulsions). Enslaved main-men Grutle and Ivar started out playing funereal, synth-drenched Death Metal with Phobia. The familiar Viking themes are there, as is that Hordanes Land-ish atmosphere. Nasty production but well worth sticking with.

12. Embryonic – The Land of the Lost Souls (from the 1990 demo of the same name). Though essentially just an earlier incarnation of Thou Shalt Suffer, Embryonic had a very different sound, leaning at a more chugging, groove-based angle.

13. Molested – Forlorn as a Mist of Grief (from the 1993 demo Unborn Woods in Doom). While one member would go on to form Borknagar, the rest of Molested had the good sense to stick with their uncompromisingly dark and twisted Death Metal. The guitars on this demo are ridiculously downtuned and virtually indecipherable, despite the decent production. Later releases offered a somewhat more melodic approach, but were still bowel-meltingly heavy. An undeservedly neglected band. 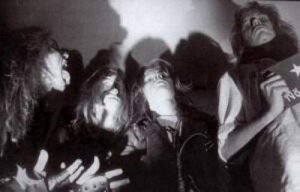