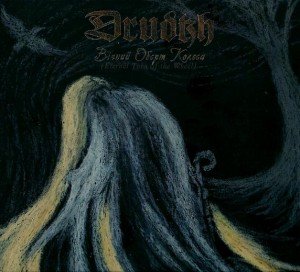 Reluctant as I am to write a damning review of any album – often a bad use of time that could be spent more profitably writing about music I really care about – the things that bug me about this latest Drudkh album cut to the very core of metal and its musical values, and therefore deserve to be talked about. As a loyal Drudkh fan, I’m also hoping that some of you have got a lot more out of this record than I have, and will be able to set the record straight in the comments.

It must be said, first of all, that there’s a lot to like about Eternal Turn of the Wheel. With its gloomy and evocative cover art and compelling thematic concept of the annual cycle of seasons, the scene is well set for the glorious but harrowing nature-rooted metal that has made the band’s name. All members put in a strong performance: Thurios’ bellowings have never been so vicious or so moving, and the drum-lines are among the most consistently interesting Drudkh has ever offered. On both points the tidy production lends a lot of support, giving ample space and spotlighting to each part. My last compliment – and it’s a big one – is that each of the four fulls songs is excellently structured, and the well-placed transitions between movements have, on each time I’ve listened to the album, kept me listening from start to finish. From Estrangement on, Drudkh have striven to craft Burzumic epics in the tradition of Det Som En Gang Var, and on Eternal Turn they show off just how well they’ve mastered that art on the structural level. They also toss in some incisive shifts of rhythm, such as the smart triplet-blasts on ‘Breath of Cold Black Soil’ and ‘When Gods Leave Their Emerald Halls‘, that still throw me every time.

So what makes Eternal Turn such a disappointment? The answer is something that should be fatal to any metal record: the complete absence of compelling guitar parts. Note that I didn’t say ‘riffs’, and this is for a good reason: the album is built up almost entirely of chord progressions rather than riffs. This alone is not necessarily a bad thing, even for a metal band: witness a band like Woods of Desolation, whose guitar parts would have worked just as well in a conventional rock song, but are so stirring and emotion-laden that they work even in a Black Metal context. The chord progressions on Eternal Turn, on the other hand, are utterly perfunctory. It’s almost as if the band have laid out the rhythmic blueprints for four Burzumic structural masterpieces and then just fired out whatever basic chord-sequences first came to mind. With only one exception (the jarring, discordant ending to ‘Breath of Cold Black Soil’), they leave me utterly unmoved. It would be all right if on top of the progressions the band had slathered some of the searing melodicism that made Blood in their Wells the masterpiece it is. Unfortunately, the best melodies on this record are confined to the acoustic intro. There’s a strong synth-presence throughout (with a tone lifted straight from Det Som En Gang Var), but the lines rarely do more than mimic the chord voicings. Aside from the rhythms and vocal bile, this music does not stir me one bit, and as far as I’m concerned, that’s a good deal worse than if it had utterly disgusted me.

Sad as it is for me to say these things about a Drudkh album, this band doesn’t owe me a single thing. I’ve had years of rapturous listening thanks to these Ukrainian visionaries, and will no doubt have many more. Even if none of them are spent listening to Eternal Turn of the Wheel, that’s only a tiny loss.

Leave a Reply to AN Cancel reply