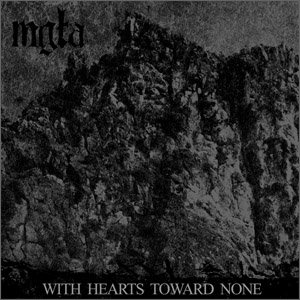 Black metal is the best metal. Given its propensity for violence, blasphemy, destruction and extremity, it’s conceivable that most metal fanatics will end up obsessed with it at some point in their lives, one way or another. It’s the omega of musical escapism, but also a challenge to pull off with the finesse and sophistication that the style demands, and readers will be well aware that we don’t just write about any old shit here. These days, too many bands explode into existence only to eventually fizzle out with little credibility left to their name. As a result, this lurker often finds itself spinning the same classic records by the same cult black metal acts that have proven themselves time and time again.

Mgła is one of these bands who, along with Lunar Aurora, have returned this year to release albums that easily rival the rest of their discographies. Back in the early days, when LURKER would review records old and new without rhyme or reason, Mgła featured among the very first articles, so we have kept our ear to the ground in rabid anticipation of their latest effort, With Hearts Toward None.

Perhaps the great triumph of this record is how little the winning formula has been tampered with. As mentioned, it takes something rather special to ascend above the ranks of simply “OK” black metal bands, and Mgła achieve this with their wholly unique approach, filtering all the necessary darkness, aggression and elitism inherent to the style through their own inspired interpretation of how black metal should sound.

With Hearts Toward None steadfastly follows the blueprint already laid down by earlier releases – all songs are untitled and numbered instead, a motif that does well to wipe the slate clean of any chance for individual pieces to rise above their brethren. Indeed, Mgła fully intend for the listener to be glued to their records from start to finish, and the satanic urgency between the tracks on this latest album certainly lends itself towards being interpreted as one grand heathen opera, in spite of the obvious separation between songs.

The opening moments will be immediately recognisable to anyone who has followed Mgła’s movements over the years, yet this is no bad thing. Heavy, almost-droning power chords, an immovable bass and versatile drumming forms the groundwork, while spindly, tremolo-picked guitar lines crawl in and out the menacing soup like a flesh-eating millipede boring holes through a rotten corpse. The band has never shied away from tunefulness, and this prevailing sense of melody invades every corner of With Hearts Toward None. Anyone who has already said that Groza remains Mgła’s magnum opus is, quite frankly, talking bullshit and has listened to neither album properly.

Here, the level of composition has never been so sophisticated, the melodies never so elaborate. Mgła’s mastery over their oeuvre has reached new heights to give each track its own identity and feel, much like scenes in a film but inextricable from the overarching direction of the album. Hear how the first song effortlessly shifts from furious blast beats to articulate rhythmic embellishments as the guitars plummet into a fist-pumping deathmarch, only to find a perfectly logical route back to its original themes, or how the vaguely psychedelic leanings of ‘II’ crumble away into the sorrowful yet uplifting symphonies of the following track. But these labyrinthine canticles all frantically worm their way towards the final and longest song, an exhaustive harbinger of the coming apocalypse through clattering, precise drumwork and utterly addictive riffing.

With Hearts Toward None is rife with fresh ideas from beginning to end, all underpinned by fantastically orthodox, Christ-baiting lyrics and tales of self-affirmation throughout. This is the sound of Mgła really getting a grasp on their special identity. With shorter songs and a longer tracklisting, there are more chances to see new sides to the band than ever before, making the record another more than worthy addition to the modern black metal landscape. It’s out now on Northern Heritage.