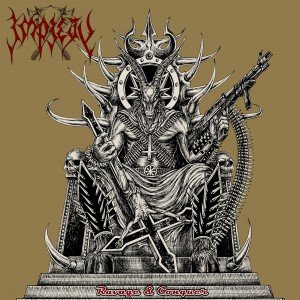 Growing up as a bright-eyed and bushy-tailed young extremist, categorising one’s music was a much simpler process. You had your meat-and-potatoes death metal, black metal, doom and sludge. Oh, wait, isn’t sludge metal essentially doom? “No, there’s an element of ‘hardcore’ there, thus making it different.” Hm, OK, fair enough. Sub-genres were already pretty daft back then, and now due to this ghastly internet hivemind it seems as though we have to attach a bunch of epithets in a clumsy attempt to describe the various pushes and pulls of 21st-century metal.

A term thrown around with abandon over the past few years is “bestial black metal”, which I can only assume refers to the most primitive, chaotic and violent strains of the style, where bands tend to sound like the bastard offspring of Sarcófago and Bestial Warlust. At a push, death/black metal then, surely? “No way, dude. That shit is bestiaaaal!” *Sigh* Right then. One recent example I’ve seen somewhat lazily slapped with the tag is Impiety, of Singapore, who released their eighth studio album Ravage & Conquer through the excellent Pulverised Records earlier this month.

My experience of the band is patchy, but it was the use of this wayward adjective that actually compelled me to check them out. For sure, Impiety ooze that 80s/90s deathened black image – spikes, bullet belts, leather, shades, the one-word blasphemous moniker – and so they should, they’ve been churning the maelstrom since 1990. It’s why I had avoided their earlier work, given that there are countless acts exploiting this niche with nothing particularly profound to say musically. But something about this new album’s striking sleeve art drew me out of my malaise; the enthroned, militarised goat figure rendered in black and white seemed to promise another level of savagery beneath.

The promise rang true. Within moments of initiating Ravage & Conquer, the album lives up to every inch of its title. Opener ‘Revelation Decimation’ kicks things off in appropriate style, charging out of the void with a rattling blast-beat fade-in and a synthesised horn section calling the listener to arms. At this point, I would normally warn the anti-blasturbation crew off this one, but I can’t – the drums form a focal point of the entire record. Their overwhelmingly precise delivery brings non-stop thrills for 48 minutes, much like some of Edmonton’s finest, Sacramentary Abolishment, Rites of Thy Degringolade or Axis of Advance.

As soon as the warlike stomp of the guitars lands (12 seconds in), the impeccable production becomes obvious. For an album with such noisy ferocity, it’s a real achievement. Every section right up to the sneering, throat-shredding vocals sits comfortably in its own airspace, crystal clear, and the music is complicated and technically demanding enough to really take advantage. Song-writing is strong and logical, with every vital riff beckoning towards greater things as each track unfolds. Because if the relentless punishment of the percussion wasn’t enough, the guitar playing fights to match it in intensity at every corner, ploughing through rapid-fire chugs and blistering, atonal arpeggios as if spurred by the whips of His Infernal Majesty himself.

However, in light of this stunning performance, it’s important to note that Impiety is not the same band as it was on the album before, or the one before that, and so on. Throughout their career, bassist and vocalist Shyaithan has been the only constant member, supported by a revolving cast of musicians drafted in to add their own twist to Impiety’s evolution. For all I know, this release could sound completely different to the rest of the discography, but newcomers Dizazter on drums and Nizam Aziz on guitar ought to be congratulated for their contributions.

The “bestial” misnomer was a red herring; this incarnation of Impiety is a far cry from the sloppy, lumbering, uninspired mess I was expecting. On the contrary, Ravage & Conquer is a taut, disciplined and accomplished record that fans of the black/death/thrash grey area should take swiftly to their hearts. Grab your copy from Pulverised now.