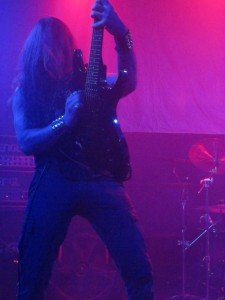 The great thing about living in a town with a decent promoter base is that amazing line-ups are commonplace. Tonight, everyone with any sense has descended on one of the best small venues in the country, Kentish Town’s Bull and Gate, to bear witness to a night of higher-order death metal across a flawless bill.

Lvcifyre kick things off and it’s impossible to not find yourself digging their monolithic, subterranean tones. Last year’s The Calling Depths was a compelling work and demonstrated a maturity that belied the band’s relative lack of experience. In a live setting, the maddening, chaotic vibe of the record is translated extremely well. There’s a palpable thickness in the music that creates a very real sense of physical scale. Compulsory headbanging ensues and if there was any question of the younger band having to win over an unfamiliar audience, then it’s quickly and repeatedly shot down by a powerful display of superiority. 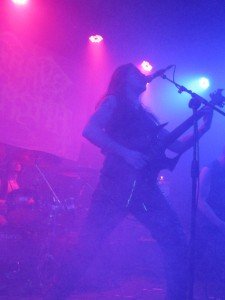 Grave Miasma are up next with their first London show since 2010. It’s a real shame, given the strength of the current UK death metal scene that gigs from this particular cult are so thin on the ground. On the other hand, it does give events like this a genuine sense of occasion. The band are faultless, delivering an astonishingly tight performance. Watching Grave Miasma is like being slowly intoxicated by some great, chthonic evil. All present are quickly ensnared within the tentacles of whatever primal, malefic sentience lurks behind, choked and blinded by the bunches of incense burning in buckets on either side of the stage.  “Magnificent” doesn’t do it justice. The experience is so consuming that the end of this particular rite is met with desperation for more and the sincere hope that it’s not another two years before Grave Miasma return to a London venue.

Foolishly, I’m sceptical that Deströyer 666 can top what has just happened, but within ten seconds of coming on stage 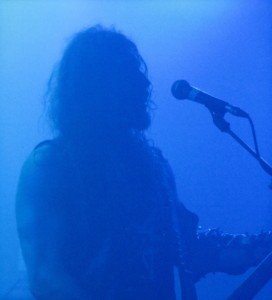 they have won the day. The audience goes legitimately mental and there isn’t a stationary body in the room. There’s something admirable about a band that can maintain this level of ferocity for an entire set and as the night wears on there’s no let up in quality. Halfway through the set, the predictable highlight materialises as the familiar strains of the intro to ‘I Am the Wargod’ push everything up to 11. There’s something so righteous in heavy metal this pure and unadulterated. At some point or other, we’ve all had that moment where your stomach knotted and you found yourself spontaneously reacting to a song. This is exactly what Deströyer delivers relentlessly.

It was a great night for the London underground and one that will not be forgotten lightly by the 150 people in attendance. It’s rare to see three bands all operating at such a high level and this is upper-tier art from start to finish. It’s only when seeing acts of this quality that the dilution of the scene is laid bare. There are a number of bands playing far larger venues to far larger audiences who would have done well to come down tonight and learn a lesson in superior death metal craft.