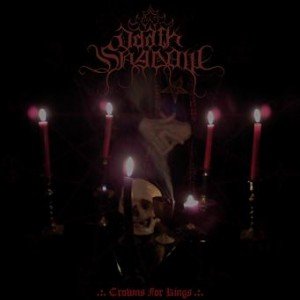 It is extremely unlikely that you will be familiar with the obscure cult of Daath Shadow. Despite being signed to Osmose, a label normally adept at promoting their releases, Daath Shadow seem to have flown almost entirely under the radar of the underground, to great shame. 2009’s Crowns for Kings is a work of paradox, at once accessible, melodic and supremely listenable while at the same time offering anyone who wants to dive deeper a work of superlative occult arte. This is a work swathed in mystery and intrigue, lyrics that allude to a deeper message compounded by the awe-inspiring brutality of the instrumentation and overarching ritual essence.

What of the constituent parts of this artisan-crafted fetish? It begins with vocals. All lines are doubled up with both passionately delivered traditional black metal screams (rumoured to be Coven from Nehemah) and guttural death cries, creating a landscape of rhythm while not sacrificing the all important message. Musically, the album has a Germanic vibe with riffs delivered with the kind of extreme force that the likes of Secrets of the Moon and Kampfar are known for.  That said, there’s none of the productive compromise associated with those bands to be seen here, this is entirely raw black metal and it is a sure testament to the virtuosity of the artists that nothing is lost in the mix. Ritual interludes further the work and provide context while drawing the audience further into the initiatic experience. Completing the picture is the presence of superb lead work by guitarists I-Nferii and Y-Soth. Cold, sinister and beautifully melodic, the interplay of the solo lines displaying the musical representation of the forces Daath Shadow are obviously so well attuned with. The effect is of soaring soundscape, adding exponentially to what is already an incredible album and cementing Crowns for Kings firmly in the upper tier of modern black metal.

This an essential work and one that deserves far more attention than it has received so far. Compelling, direct and resonating with an aura of mysticism that is often attempted, but rarely achieved, Crowns for Kings will work its way into your consciousness, stimulating the intellect and delivering a legitimate awakening at the same time that it stirs the primitive black flame. While hard to track down, anyone who does so will be rewarded with a work far removed from the often disposable pieces so often associated with our current scene and an experience that far exceeds all expectations.