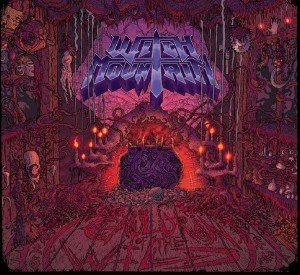 Female-fronted doom is in serious danger of tipping over from zeitgeist to trend. Seemingly from nowhere, a crop of bands have emerged that seems to have captured the imagination of a fairly disparate audience. Previous experience dictates that the wider an influence spreads, the greater the chance for dilution. That said, with quality release following quality release at the moment, Witch Mountain’s Cauldron of the Wild appears to be yet another superior emanation.

Standing aside from the rest of the milieu thanks to a heavy dose of soulful Americana, this is a record that seems to sit comfortably cross-genre, refusing to conform to simply being just another doom release. Riffs are rooted firmly in the Sabbath school and there’s a constant sense of momentum that drives each section, song and ultimately the album itself onwards with a tangible sense of purpose. There’s a real sense of tension to the music, supported by subterranean bass tones that juxtapose incredibly well with the crystalline guitar work.

At the centre of the album, though, are Uta Plotkin’s vocals. With an incredible range, beautiful harmonies and a distinct southern twang, this is a performance that deserves far wider recognition than the limited audience it will receive. Take any mass-market female singer/songwriter of the last ten years, realise that Uta sounds better with half the production and then allow her voice to fully draw you into her world.

Cauldron of the Wild is a demonstration of how to plan and execute a record with total awareness of every component. There isn’t a single extraneous detail, nor omission, and the impression is of a wholly complete record. This is a triumphant return from a band that have been in the wilderness for far too long. Immediate listening is recommended for anyone who wants to partake in an absorbing experience of higher-order doom. Available through Profound Lore from June 12.