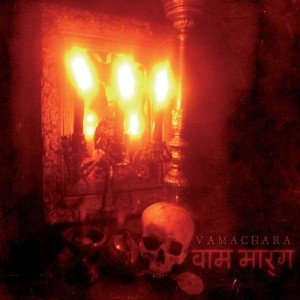 As the world prepares to burn in an economic firestorm, society stands on the brink of annihilation and the current cycle of civilisation prepares for its end, superior black metal rhetoric emerges from the ancient land that marks the eye of this particular storm. Hellenic black metal has a rich and impressive history, standing alone from the rest of the tribe with a genuinely distinct identity.

Acherontas emerge as triumphant standard bearers of the left-hand yoga. Vamachara is a work of pure ritual invocation, expertly treading the line between sublime melody and nightside aggression. Opening with ‘Blood Current Illumination’, it becomes clear that Acherontas fully understand the power of the riff. This is characteristic of the entire album and as a statement of intent, the opening track does exactly what it needs to in order to ignite the necessary passions.

Production quality is superb, with every subtlety allowed to shine through. Guitar work stands vanguard, expertly leading a sublime sensibility to the unfolding art. Riffs spark involuntary headbanging and each is given the focus required for it to surpass the barrier of mundane cognition and lodge itself firmly into the primitive consciousness.

The entire release is elevated by this musicality and places Acherontas firmly in the higher level of this particular cult. By the time the record has moved on to the subversive meditation of ‘Ohm Krim Kali’, it has already exceeded all expectations and transcended all limitations of the genre.

This deserves immediate attention. For those with the necessary devotion, Vamachara offers a codex well worthy of contemplation. For all others, this is as strong a black metal release as you will hear and a record that will linger long after the final notes have played out. Get it from Agonia Records, now.