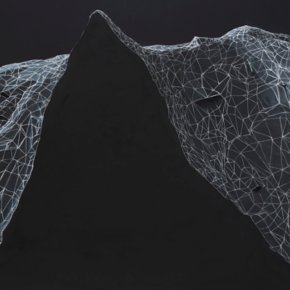 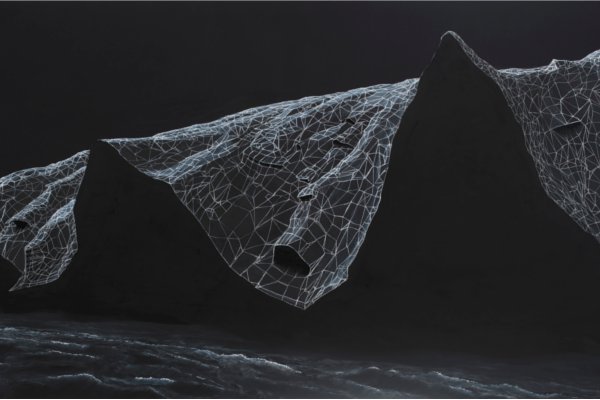 You must have chaos within you to give birth to a dancing star.

‘In Our Architecture This Resounds’ is the most aptly succinct album title I’ve come across in a while. An atlas of an album that drags ambient and drone on doom laden shoulders through astral projections and cosmic scrutinies. This is an exercise in conveying the size and weight of the cosmic abyss. Everything from the 33×22 poster art by Sandro Setola to the diminutive radio samples that echo throughout coalesce to provide a pertinent aural take on cosmic insignificance.

For creator Mike Bjella this latest GOG release represents ‘what it is like to finally notice that we are alone and to journey alone with eyes wide open in the darkness. Everything beautiful and fragile massively outweighed and outnumbered in the debris of stone, hate and the indifference of the universe‘. Far removed from the usual inane subject matter that perforates the discographies of other ‘drone’ based acts, GOG has never been one to disappoint.

The nebulous, black drone that rests at the center of ‘In Our Architecture This Resounds’ is akin to the shrill, voidal howling that made Alien the film it was. A cast of ambient frequencies and endless coarse textures reveal the influence that Malpais has had on this project.  The more theatrical moments of rhythm and chance are symptomatic of Demdike Stare at their most subdued. It is bizarre to observe Bjella manipulate tones between an oppressive sorrow and his now trademark blinding light (that may very well be the aural definition of hope).  The album is engineered to sound best on headphones (unlike the recent collaboration with William Fowler Collins – whose robust midtones made for an enjoyable family experience) and is dynamically GOG’s most versatile work to date.

The ‘architecture’ of which Bjella speaks is as much of an inspiration as it is a weight: ‘you have to look in awe and amazement at the structure that binds us and keeps us temporarily where we are, finding peace with that hopelessness’. The dualistic nature of GOG finds ample breathing room in these two outlooks of cosmic insignificance and throughout the entirety of ‘In Our Architecture This Resounds’ there occurs a delicate play on balance. The obsidian drones that resonate at manifold frequencies are apt to summon feelings of insignificance, depression and even anxiety. The first time the sheer breadth and infiniteness of the cosmos is comprehended, staring up into the ether and the following, nagging weeks of restless sleep as the implications of this wrestle themselves into your belief system. That is the cosmic backbone of dark drone GOG manipulates.  There is also the blinding clarity that Mike Bjella so wonderfully conveys by such minimal means – this crystalline sound pierces the veil of night as perfectly as our needle-wide telescopes in an attempt to uncover anomalies in the cosmic canvas: an exoplanet orbiting the goldilocks zone here, an unusual cloud formation there – a desire to seek out truth and further bask in the wondrous beauty of nature.

The crushing abyss relative to our smatterings of hope: a serenity and graveness injected simultaneously by Bjella that elevates this release to a level few other drone/ambient acts achieve. ‘In Our Architecture This Resounds’ is a voyage in both sound and idea that relies on one of the most profound experiences available to everyone. We really do live on a placid island of ignorance, nonplussed by the harsh realities outside this bubble-blue prison. A jumping board into the heart of absurdity that will set your belief system ablaze, this is a recommendation to all lurkers. Available now from King of the Monsters Records on a double LP, complete with resplendent white vinyl and massive poster.