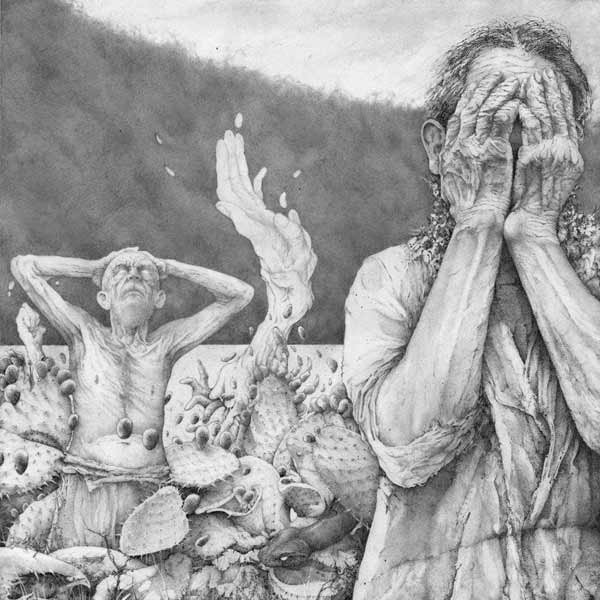 There was an air of uncertainty as to whether the darlings of black metal would continue their groundbreaking project in the wake of Paracletus, the album that closed a trilogy six years in the making. But our fears were allayed a couple of months ago when rumours of a new Deathspell Omega record began circulating. Then the imposing sleeve art leaked and the metal underground went apeshit as usual. It confirmed everybody’s favourite band was indeed engineering its return with an EP titled Drought, which was released last week. As an avid follower, this lurker was champing at the bit to hear it. Deathspell Omega, in my eyes, could do absolutely no wrong…

But on the first listen it fell totally flat. And since then I’ve been locked in a strange love-hate purgatory with Drought. After rattling through the EP’s brief 20 minutes a few times, the draw of earlier material proved too strong and I rinsed what I have of the discography right back to Infernal Battles. Standing alongside the rest of the corpus, something seemed to be severely wanting on this latest effort. I wrestled disappointment and grimaced as the first two tracks, slow-burning ‘Salowe Visions’ and frenetic ‘Fiery Serpents’, seemed to invite comparisons with the proto-math rock of Slint or various spazzy emotional hardcore of the mid-90s. These are all things I can appreciate in their own right but on hearing it within Deathspell Omega, I almost felt offended by their audacity. The twinkling near-beauty of the opener didn’t sit quite right following the frenzied might of Paracletus, and Kénôse, ‘Diabolus Absconditus’ and ‘Chaining the Katechon’ all towered over Drought at that moment.

However, disregard the above, because what followed the initial letdown was an awakening and many hours spent listening to the EP whenever I could. Eventually it dawned on me that perhaps I should feel offended by their sense of adventure. Deathspell haven’t exactly been peddling black metal since Fas, and the many oddities of Paracletus even moved me to include them in LURKER’s progressive rock primer last summer. Immediately looking to the band’s past after hearing Drought was a mistake – Deathspell only ever look to the future, and if that’s not taken as read on approaching new material, there will be a misunderstanding.

Weeks have passed since those first spins and now I can’t devour a single track on Drought without thrashing around in glee. ‘Salowe Visions’ is Deathspell at perhaps their most vulnerable and delicate, presenting a side to the band we’ve never heard before. The vast droning spaces between chords recall the opening moments of Kayo Dot’s infallible debut, Choirs of the Eye, strangely an outsider act who also appear to be taking inspiration from Deathspell these days. ‘Fiery Serpents’ follows hot on the heels and only sounds like limp punk for 30 seconds before settling into a groove somewhere between the intensities of Fas and Paracletus. There’s a hideous angular buzz of a riff that takes this song over around three minutes in, strangling it to death. As I lose control of my senses once again, I start to believe this is Deathspell really pushing it.

The record charges ahead in a furiously noisy vein, ‘Scorpions & Drought’ quickly becoming a storm of wailing distortion and incessant blastbeats. But it’s the shortest track ‘Sand’ that commands the most attention: the drunken flailing of guitars at the end of each passage is addictive and it’s a shame more isn’t made of these ideas. Fortunately this motif returns under a different guise as it segues into ‘Abrasive Swirling Murk’, which can be streamed over at Decibel. Final track ‘The Crackled Book of Life’ is an interesting instrumental and probably the most melodic Deathspell song since ‘Insanity Supreme’. The Gregorian chants with the steady drumbeat beneath pick up right where ‘Carnal Malefactor’ left off and an eerie fade-out leaves the listener completely befuddled as to what is coming next from this incredible project.

There’s little doubt Drought will have alienated many with its uncompromising content, but if that’s you LURKER says persevere! Following the Deathspell Omega triptych (one of the most epic musical achievements in recent times) is a daunting task but after repeated listens and a gradually unfurling appreciation for every small nuance, Drought is now up there among Deathspell’s finest moments for me. They are certainly one of the most daring, forward-thinking bands of any kind of music these days and I can’t wait to hear what they concoct next. This is modern prog rock at its best and most vicious – roll on another trilogy.

Obsessives, grab your copies from Season of Mist or NOEVDIA.