“All great things must first wear terrifying and monstrous masks in order to inscribe themselves on the hearts of humanity.”

Heavy metal’s more extreme spectrums have always lent themselves to progression and experimentalism. By marrying sonic intensity with utter bleakness of vision, they’ve become riddled with bands determined to break new ground in pursuit of their macabre ideals. Lying at the vanguard of extremity is black metal, and although in the wrong hands the style is often subject to rigorous rules and imitation, when done right it opens up musical possibilities never heard before. There’s a discernable pantheon who have reigned supreme for the past decade, bands that caress the void as if it were an afterthought and return with twisted sounds destined to shape how we perceive black metal forever. It’s an exclusive club with a very small membership, but at some point later this year an album will drop and level the playing field once again. 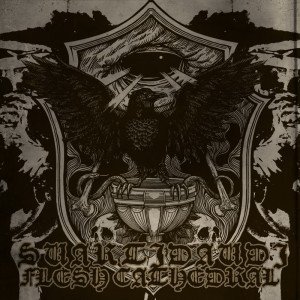 That release is Flesh Cathedral by Svartidauði, who hail from the far-flung frozen rock in the North Atlantic better known as Iceland. They’ve been contemplating their craft in obscurity for a while, spawning three demos between 2006 and 2010, but now this full-length monstrosity is set to propel them through the ranks. Like LURKER favourites Blut Aus Nord, Deathspell Omega or Nightbringer, Svartidauði wield the ability to bend the will of black metal to their own horrific ends, giving rise to a thrillingly unique take on the genre.

An unshakeable sense of narrative unfolds to the drones of opener ‘Sterile Seeds’. It’s as though the listener has entered the titular Flesh Cathedral itself, blood trickling down carrion walls, preparing to imbibe the psychoactive sacrament to Satan as a demonic choir goads them on. It’s terrifying – and that’s before the riffs take hold. Indeed, a persistent psychedelic nausea binds the record together, enforced by the abstract squealing of guitars and biomechanical lurch of the rhythms. Across four tracks, all well over ten minutes long, Flesh Cathedral becomes the soundtrack of one wretched soul completely losing their mind as the secrets of the universe are torn asunder.

It’s the band’s stunning versatility that allows for these vivid hallucinations. Avoiding typical all-or-nothing aggression tactics, Svartidauði is a dynamic, shifting entity with a clear vision of how to project its particular grim atmospheres. In fact, everything on display is a small step away from the norm. Vocals lean towards a deep deranged death-rasp, as opposed to the regular eunuch shrieking. Then dense, down-tuned guitars seem to breathe and groan in the slower, more brooding sections, while groove-laden drums intricately build up the tension phrase by phrase before flying off into adept and flexible pummelling at whim. This is definitely HEAVY black metal – immense walls of power chords and a loud grumbling bass tone threaten to swallow the chaotic leads that often try to break free of the writhing mass around them.

Each composition defies its length, traversing so many different emotions, textures and melodies (yes, they’re present too!) that it feels like Flesh Cathedral should be showcasing even more new material. Without a doubt this is up there among Mgła’s With Hearts Toward None and Dødsengel’s Imperator vying for “best orthodox black metal album of the year”. LURKER is incredibly anxious and excited for its release, although no firm date has been set due to the band being “slow as hell with the layout”. When Flesh Cathedral does finally arrive, if it isn’t one of the true breakthrough hits of the year, I will have lost all faith in the metal underground.

Flesh Cathedral will be released in Europe by Terratur Possessions and in the USA by Daemon Worship Productions… soon.