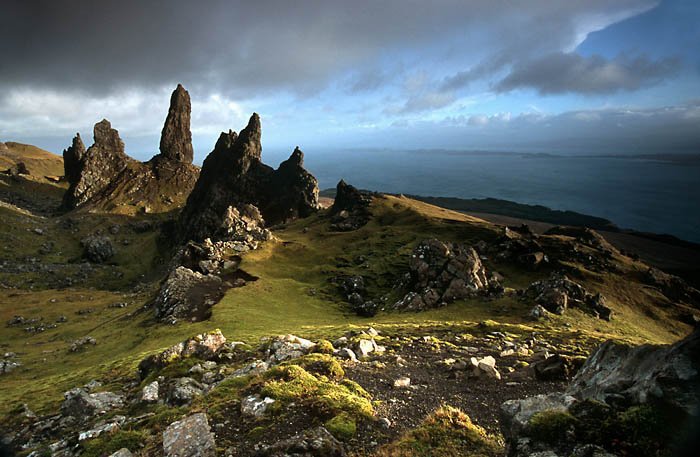 “The Old Man of Storr” on the Isle of Skye. Photo by Frederic Lefebvre.

Amebix were clearly an anarchist band, but they were always more interested in art than propaganda. Instead of articulating a dogma, they used evocative images and crushingly direct music to conjure a defiant, individualist “spirit”. They gave form to their ideals as an aesthetic and, above all, as a feeling, leaving  interpretation to the listener. The point isn’t for us to keep this sense of mystery inviolate, but to dive into it headfirst. In that spirit, I believe this final segment of my interview with the Baron may offer some insight into the groundwork of Amebix’s elusive politics. If there is a law beyond those shaped by man’s will, it emanates from the land itself. Through the land we are centered in the world, and when we cannot connect to the land we are cast adrift in the floating dream-worlds of capital and empire. Just as Amebix’s sonic power has its roots in the land, so too does any hope for resistance or redemption.

If you’ve only just found this interview, you’re walking into the end of a lengthy and involved conversation. But you are, of course, more than welcome to join in. In Part I and Part II, Rob and I discussed Amebix’s lesser-known musical and conceptual influences, and in Part III we talked about his understanding of musical power. Now, Rob spins some fascinating stories about the telluric foundations of his work. This was an especially interesting part of the interview for me, and I feel quite lucky to have had the chance to talk about this stuff with one of my heroes.

Amebix has always been connected to a really substantial idea of land. It’s musical power that arises from a place and is channeled through you. You’re drawing it up from the Earth – it’s this chthonic thing. Aside from the landscape around The Glebe, which you’ve already mentioned, could you tell me about some favorite places, places that have inspired you? And what drew you to Skye in particular?

Well I understand your question there, but I wouldn’t necessarily talk about “favorite places,” because some of the experiences that I’ve had in landscape have not been pleasant. But they have been very informative.

Funnily enough, you’d think that “Stonehenge, man!” would be a big place, but it isn’t. It’s almost like someone took the power out of that place. It’s not obvious places anymore. It’s a difficult thing to explain, but it’s this very primal feeling that draws you down into the Earth itself. I can feel very connected, but not always pleasantly connected. It’s almost like a kid sticking his tongue onto a battery. It’s kind of like “Boom! Oh, shit!” I’ve had that experience in a few experiences, in Devon and also on the outer isles here as well. They’re not places recognized as being this place or that place, they’re not great sites, they’re not monolithic constructions, they’re just places within the landscape that have got a particular power.

I don’t have the vocabulary to explain it, but I can give you an anecdote. The first time I visited the states was maybe in 94 or 95, and I went across to see a friend in California. I was staying down near Santa Cruz. One day I got up and took a bus down into the local town, and I felt real unease. I couldn’t work out what it was. I started having this fucking panic attack. Breathing was difficult and the rest of it. I had a beer and managed to calm myself the fuck down, and thought “What is this, what is going on here?” And when I looked inside I found that what I was used to was having a very immediate connection. It’s almost like, within my stomach, I can feel a line go down into the Earth itself. I can put an anchor into the Earth. I can feel the Earth, I can feel the history. And when I’m at home I feel that history going back for two or three thousand years, a direct connection with it.

What really upset me was that I couldn’t get that fucking hook into the ground. I didn’t belong in that place, and European people didn’t belong in that place. Americans have something like the crust on top of a pudding, this 150 or 200 years of history, which hasn’t given them any real connection. It’s like they were rejected. As a European person there I didn’t feel that I could hook in as easily. I don’t know if that makes any sense to you at all? 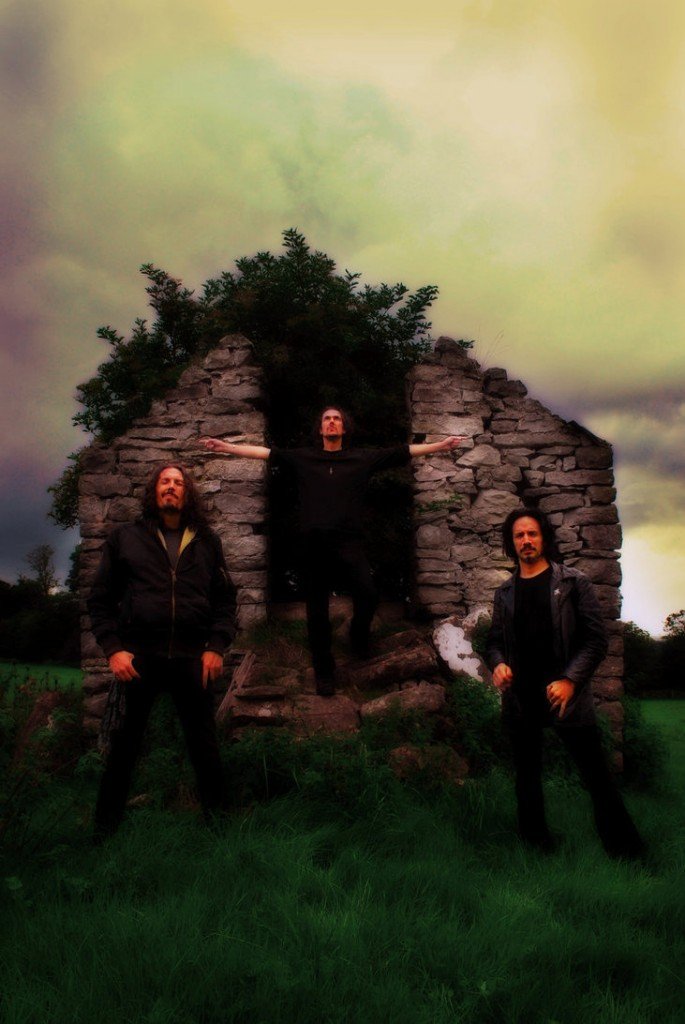 Rob, that makes absolutely perfect sense. I’ve actually felt the same way since I was young, even though I’m American. There are these terrifying empty spaces. It’s a country that’s been wiped clean, essentially, by capitalism. It’s been stripped of the people who populated it before, its landscape has been put completely at the mercy of economic forces, and there’s a leveling-out and flattening of place.

You get it then, that’s great!

So there’s this big mountain range between San Francisco and LA, I can’t remember the name of it, but I went up there with a friend. I got out onto the peaks and had this realization that, while I wasn’t connected, the people who lived there always had been. It was their place and it was their spiritual tradition. I didn’t have a hook into that, didn’t have a right to hook into that! You haven’t got the same history at all. And however much people like to make themselves appear to be a part of this or a part of that, if you don’t have the genetic coding you won’t fit into it. It’s not a racial thing or anything like that, at all, it’s just that I have an understanding about the islands where I grew up – the British Isles. I have an understanding of this place, and that’s where I fill my cauldron, you know?

Do you think it’s at all possible for an American to have a meaningful connection, or only for a Native American?

I guess people must…

Well yeah, it did throw some questions up for me. I’m going to sound a bit hippy-trippy again here, but I was looking at the geological setup of California, and the feelings I was having on a psychic level were reflected in the lay of the tectonic plates that were right underneath me. It’s this feeling that you’re gonna just get fucking shifted off this place. The land actually rejects the people that live on it.

Yes, I think the land here has been convulsing in horror for the last three centuries.

That’s what I was feeling and that made me feel very, very uneasy. I had a lesser experience like that in Australia. It’s almost comical, in Australia. I’ve got some Australian friends so I’m not going to be over-critical here, but there’s not a great deal of thought going on over there about their relationship to the environment. Still, I didn’t find things quite so hostile, it was more like “What the fuck are these idiots doing here? They should be back in London!”

So, Amebix is clearly not a nationalist band, but you have this very strong connection to land, and – to me, at least – Amebix feels quintessentially English. The whole range of imagery you draw on, the tradition, the feeling, all seem of a piece with Tennyson and the Arthurian mythos and the ancient epics. Earlier, you mentioned Procol Harum’s “English eccentricity”. Do you hear that in your music, too?

The term really would be “British” rather than “English”. Because “English” is just about England, but “Britain” is about the British Isles, which includes Scotland and Wales and Ireland as well.

Yeah, it is a very important distinction. I would say Amebix have an English eccentricity but a British outlook – not in a nationalistic sense at all, but in a very primal way of understanding place. It’s the feeling of land, which isn’t stamped with the identity of one person or one race or one idea – it has its own thing. Land is a tuning fork, which you either resonate with or you don’t.  And I resonate with the British Isles.