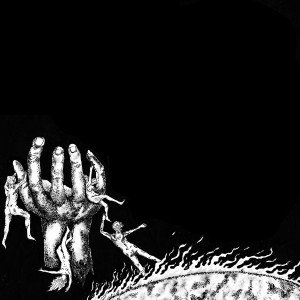 As all loyal readers should know by now, LURKER listens to no one but itself. Inferior publications and the metal Twitterati have time and time again proven they can’t be trusted as they collectively spin hyperbole and heap praise on wholly undeserving acts. And when these same band names keep cropping up in whatever hellish feed you waste your life on, sometimes it’s all you can do to completely block them from your mind and search elsewhere for new music. But being such handsome, arrogant bastards is both a blessing and a curse, it seems, because when something’s getting talked about a lot there must be some merit there, right?

For a brief period last year, the words on everyone’s lips were Barghest and False, labelmates who had both put out their debut records to uniform acclaim – “rising stars of USBM” kind of stuff. It was enough to leave a bad taste in the mouth at the time. But now, as this lurker desperately tries to claw out of an obsession with millennial metal and get excited about some newer bands for a change, Wisconsin-based Gilead Media conveniently prepares to split an LP between the two. Feeling brave, LURKER waded in to see if it had genuinely missed out…

In theory, Barghest newcomers already have plenty to enjoy lying in wait, provided they’re familiar with the Baton Rouge bruisers Thou. Barghest share a guitarist and former drummer with these Louisianan sludge innovators and the link between the bands does leave me wondering why I didn’t pick up on them the first time round. They steer the first half of the split with their foul, lo-fi black metal, contributing the tracks ‘Shifting Sands’ and ‘Inhuman Hatred’.

The trouble with theories, however, is that they can often fall through. As a long-time supporter of Thou, my expectations were high on approaching this split, but rarely does Barghest transcend simply OK with their half. Although the opener displays faint whispers of everything I love about Thou’s unique sound and hits some thrilling grooves, ultimately it comes off as hollow – and that’s not because of the band’s “kvlt” production values. Clearly Barghest aim for the jugular with their primitive execution, yet the riffs just lack the bite necessary to make it an interesting ride.

‘Inhuman Hatred’, on the other hand, throws a bit of a curveball with its disgustingly down-tuned guitars and esoteric death metal flavour marking it out from the pack. Unfortunately, the track’s repetitive nature keeps it from truly going somewhere, and while this lurker doubts Barghest is intended to be a side-project with every creaking bone in its body, they certainly sound like one. Listen.

Ahh, False – the band with the name obviously designed to make stone-cold elitists quiver with rage. I’ll admit I took the bait; this winking post-ironic moniker was all that prevented me from checking out last year’s EP. Shucks, do I feel silly now though, because False’s 17-minute colossus, ‘Heavy As A Church Tower’, thunders forth with a purity sadly lacking in most American black metal.

It’s a fitting song title, as False sound capable of ripping churches out by the roots. There are echoes of the magnificent Weakling here, but not in the sense of the terribly bland “Cascadian” scene, which always seems to get lumped in with these untouchable masters. No, False drips malevolence as the serpentine track worms through slow-burning chasms, symphonic pomp and jarring Luciferian urgency, all swirling within a pervasive foreboding atmosphere.

The scornful spectre of a female voice haunts the epic movements at every twist and turn. Black metal vocals can so often be completely unremarkable, so it’s refreshing to be able to say that they’re actually perfect in this case. False also boasts a distinct European edge to their attack. This is where the split as a whole falters – Barghest seems unable to compete. Granted, they are two completely different bands, but to this lurker it’s clear which one will prevail. Listen.