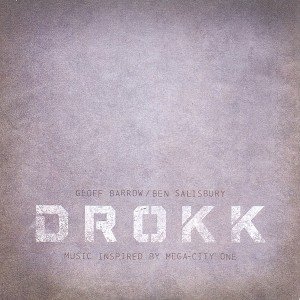 Music has a way of attaching itself to the context in which we experience it. The album on repeat for the road trip, the gig where they played that song for the first time, the song you heard on the radio then listened for another four hours to hear it again and find out what it was. So it is that when we hear it again, years down the line, all those memories come flooding back in a Proustian deluge, the subjective qualities that form the intimate, individual bond between music and listener.

On the other hand, some albums are delivered with such confidence and sense of purpose that it speaks between the notes, demands to be heard in certain contexts. With Drokk, the recent collaborative offering from Geoff Barrow and Ben Salisbury, I am hit by the urge to drink eighteen cups of coffee and pretend I’m a robot.

Subtitled ‘Music Inspired by Mega-City One’, here you will find all the dystopian menace and intense foreboding of the Judge Dredd comics. It pulls you into a world not read but experienced first-hand, largely free of schlock science fiction tropes and instead a world of human condition shot forward into the future with all possibilities expanded by technological progression but geographically condensed by outside forces. This is music that perfectly evokes this landscape, and regardless of the listener’s familiarity with the 2000 AD series brings to life every important psychological feature this world has to offer.

The music is ice-cold, brutal and focused, a masterpiece of synthesiser worship. ‘Lawmaster/Pursuit’ opens with slow heartbeat-like pulses, rushing through harrowing arpeggios to an abrupt, climactic finish: the tension of anticipation and the focusing drive of adrenaline released as we’re kicked into action. ‘Titan Bound’ is an expansive journey across the stars with the melody slowly unfolding over a decaying bassline, while ‘Helmet Theme’ suggests a perfect accompaniment to a montage of the Judge donning his iconic armour with its ascendant chords and metronomic pulsing beat. 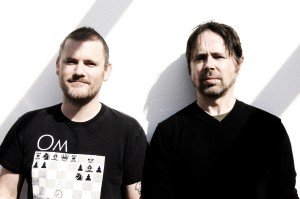 It’s not surprising that the music evokes such a narrative. Ben Salisbury composed the scores for none-higher-production-values documentaries such as the BBC’s Life of Mammals, Life in the Undergrowth, and Life in Cold Blood, narrated by David Attenborough. Consider for a moment the enormity of the task of scoring music to often baffling footage (see the mating leopard slugs, for example) that imbues it with an emotional resonance felt by the millions of people who hold these works in the highest esteem. That ability translates perfectly on Drokk, the soundtrack to the Dredd film they never made. Each track is crafted to accompany a set scenario: patrolling the dingy underbelly of the mega-city, the suit-donning montage, the high-octane assault on the bad guys. Each scene creates itself in the mind of the listener; perhaps the first film that never needed to be made because the disembodied soundtrack said all that is to be said.

Ben Salisbury isn’t the lone visionary at the helm of this work, though. Geoff Barrow, possibly the hardest working man in British music today, brings his incredible experience and talent to the table and with this album expands the scope of his already astoundingly diverse discography. As if being a principal player in British stalwarts Portishead wasn’t enough, he runs the excellent Bristol-based record label Invada (the home of other excellent bands such as Fauns and Thought Forms) on which he has just released the second album from his band Beak>, and earlier this year was responsible for the debut album from the Quakers hip-hop collective on Stones Throw.

Barrow’s faultless taste and broad talent bestows Drokk with the unsettling, hypnagogic sheen of Portishead, and the driving motorik pulse of Beak>, while Salisbury’s ear for arrangement and filmic vision creates an uneasy but rapturous listen. It shows that in 2012 an unashamedly synthesiser-based album can exist and succeed without ironic recourse to the unfashionable soundtracks of the 70s, but instead with all the dizzying futurism, wonder and terror that such music can hold.