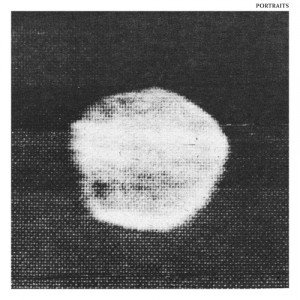 When listening to drone music, particularly that made by large ensembles in which individual contributions are lost amid a single intonation, it becomes difficult to understand the real intention of the piece when compared to those made by solo artists, working with smaller arrangements or more minimal compositions that seem to accomplish the same goal.  The complexity of the pieces in particular (as complex as minimalism can be) is determined by the way each musician adds to the pool of sound, creating a single sonic slab impossible to be picked apart to recognise who did what by ear.  In Portraits we have a range of talented musicians such as Gregg Kowalsky, Evan Caminiti and Jon Porras (from Barn Owl) and Michel Elrod (among others), all of them linked to Jefre Cantu-Ledesma of Tarentel fame through present and past collaborations. They’ve all made music in genres vaguely related to each other, and yet all of them have abandoned their respective styles and synchronized their efforts to create this album. It’s reminiscent of one of the ideas Tony Conrad had regarding artistic collaborations and communities, and what in turn constitutes as “pure art”:

“In the old ‘modern’ art, Picasso painted his girlfriend and Cézanne painted his neighborhood. But in postmodernity, there has to be impersonality, because the understanding of art is that it is only legible among a community with shared cultural interests. When Warhol painted Marilyn or Campbell’s soup cans, it was only to display their objectification and depersonalisation.”

When the artist loses himself in the composition and becomes part of a whole, the music achieves a broader scope and reaches the listener in its purest form: impersonal, incorporeal and abstract.

There are three pieces in this album, named after the concepts behind each one. ‘D’ is basically the key D played with a tambura, buzzing at regular patterns as a subtle gong-like percussion sets the beat. There are other elements in this piece such as the electronic drone lingering in the background, following the resonance of the traditional Indian instrumentation as it creates a spacious feel in the composition, and the soft guitar plucking creating another, almost undetectable.

Then we have ‘Sa’, the shortest track and the only one featuring vocals, which consists of intonations of the syllable that gives this piece its name, as a mantra. And lastly we have ‘Gong’, which, as its name suggests, is made up almost entirely of gong percussion with a bass drone filling the background, creating a ghostly atmosphere that can only be fully appreciated at high volumes. The entire album clocks at 39 minutes, but it feels at least twice as long.

Portraits is one of the most successful drone ensembles I’ve heard in a while, evoking timeless music with simple concepts, pulling them off nicely. This album can be purchased from Important Records here.