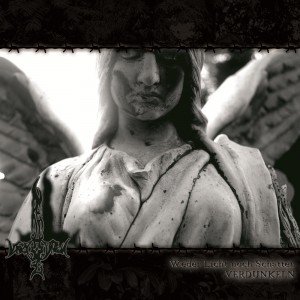 Sprung from the Teutonic black circle surrounding Vàn Records, Verdunkeln are one of a handful of bands that rightfully bear comparison to Burzum. And yet they sound nothing like that. They’ve paid close attention to Hvis Lyset Tar Oss and Filosofem, but they’re more interested in what Varg was trying to achieve – the opening up of mythical spaces, the awakening of primal drives – than in the iconic riffage and guitar tone that he used to achieve it. By grasping the inner spirit rather than its outer signs, they nimbly overspring the bounds of the subgenres that rose up in Burzum’s wake. On their debut, Eintritt in Die Qualenfall, Verdunklen overwhelmed the senses with a brooding sturm of distortion, but on Weder Licht noch Schatten they intensify their commitment to minimalist songwriting, zeroing in on the interaction between distinct and often delicate melodic figures. Already a strange band, Verdunkeln is growing even stranger, becoming ever more its own entity.

Weder Licht… has very little to do with received notions of black metal. While Verdunkeln remain fond of power chords and savage snarls, they’ve developed a musical vocabulary rooted in vintage UK goth rock. Their ghostly ostinato riffing seems patterned on the disembodied blues of Fields of The Nephilim. And, like the Nephilim, Verdunkeln see no divide between roaming the spirit world and rocking out. While “clean vocals” almost always entails a strained, faux-operatic attempt to sound like Ihsahn or Garm, Verdunkeln’s vocalist/guitarist Gnarl sings more like Ian Curtis or Andrew Eldritch. Of course, his melodies and inflections are also strongly reminiscent of German folk music. This volkisch quality suggests another unorthodox kinship – to Rammstein. That’s not a joke. Despite their pop-industrial vibe, Rammstein often craft gorgeous and quintessentially Germanic hooks (e.g., ‘Sonne’ and ‘Spieluhr’), and Verdunkeln have a similar gift. If the gothic, sylvan black metal of Weder Licht… has any precedent it is Forgotten Woods’ Sjel Av Natten EP, and yet the two albums sound nothing alike.

Reviewers of Eintritt in Die Qualenfall rightly hailed its hypnotic properties, and on Weder Licht… these are further refined. Nevertheless, it is important to understand that Verdunkeln never play lullabies. Even their quieter passages tremble with barely contained power. As ‘Die Letzte Legion’ begins, a three-note arpeggio rings out from the gloom, plucked low on loosened strings. Instead of the expected distortion, there’s just a strange watery effect. After twenty seconds, a second guitar doubles the first, but with a crisp, glistening tone. The riff, a long pattern based on that first arpeggio, is composed entirely of straight eighth notes grouped neatly into fours. In the wrong hands this could sound static or stilted, but the guitarist’s plucking is true to the watery guitar tone, ebbing and flowing while the bass supplies a lightly syncopated “push” from below. All the while, the drums pound out a rock beat with industrial precision. The overall sound is ethereal and crystalline, yet pulsing with momentum and ripe with rage. Verdunkeln move in lockstep, yet their music almost glides. Everything is drawn taught. Suddenly, it gives way before a gut-busting power chord riff, but this is just the revelation of a heaviness that was already there. 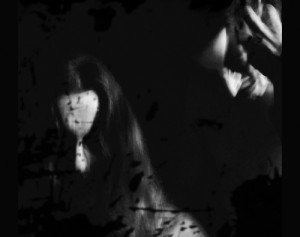 Throughout Weder Licht… Verdunkeln interweave seemingly contradictory musical impulses. Every song but the storming opener, ‘Das Antlitz Der Himmels’, features the motorik drumming and geometrically strict plucking patterns that dominate ‘Die Letzte Legion’. It’s as if the album were written on a grid. And yet the grid is alive, coursing with a wild melodic energy that warps it in three dimensions. ‘Des Antlitz der Himmels’, for instance, is a black metal lieder with all the Romantic lyricism of Verdunkeln’s labelmates Nagelfar. The song is in a 6/8 time signature, traditionally used to instigate furious headbanging, but here it suggests a double-time waltz. The dancing beat imparts a lightness to the heaviness, a blithe grace to the crushing gloom.

Similarly, the ostinato plucking of ‘Unsre Richter’ spins out over a thick, down-tuned death metal riff. This is the only track on the album to feature a charging double-bass attack, yet it’s as haunting as it is brutal. Eventually, Gnarl breaks out into wild soloing. These rock heroics contrast sharply with Verdunkeln’s careful control, but – as irruptions of vital force within rigid form – are nevertheless essential to the overall aesthetic. Everything about this album is dialectical, but it has nothing to do with Hegel’s schematising. Rather, Verdunkeln channels the proto-dialectics of Schiller, who saw beauty as a dynamic relationship between sensuous and formal drives. The idea is not to reconcile the tension between the two, but to give a kind of transcendent harmony to their continuous opposition. On Weder Licht… we hear instability sustained and contradiction given life.

Of course, listening to black metal isn’t about sitting back and savoring the dialectics. While Verdunkeln are masterful songwriters, they never drift away into abstraction – everything is at the service of spirit. Weder Licht… is full of twilight visions on the edge of consciousness, and shades of emotion so nuanced they are specific to this album. I can’t translate the lyrics of ‘Die Leztze Legion’, but in my own way I know what it’s about. It pulls me away to the green shadows of the Teutoburg Forest in 9 CE, where the titular “last legion” snakes along a narrow path at the base of a hill. As Augustus’s finest crash onwards into terra nova, the Goths move swiftly along the secret back ways of their woods, stepping lightly through the undergrowth. Then the ambush is sprung. Javelins rain down from the hilltop. The spear of Wotan rushes headlong towards the shield of Mars. Muscles tense, blades rise, men shout, blades fall, veins open. The land favors its own. Stretched too thin, the Roman lines break. Generals fall on their swords and soldiers surrender, while centurions and signifers fight to the last around their sacred standards. The sons of wolf and eagle are given over to the wolves and eagles. Yet all of this unfolds with the slowness of dreams and the beauty of myth, as if time had opened itself up to accommodate a cataclysm.