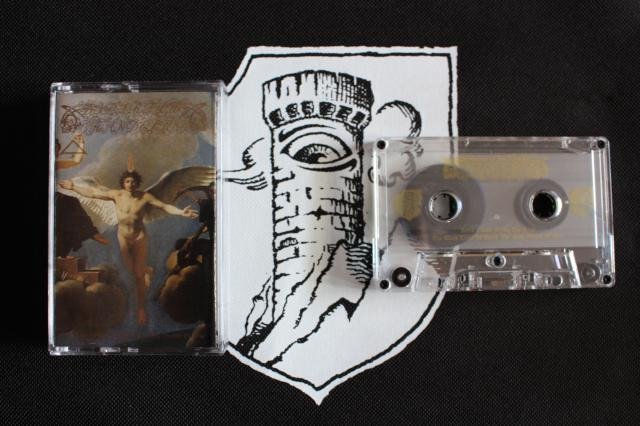 Departure Chandelier plays “Napoleonic Black Metal inspired by the cruelty of French history and the illuminating powers of death”. Comprised of Akitsa and Ash Pool members, the music retains the hypnotic melodicism of the former and brash clamor of the latter. The Black Crest of Death, the Gold Wreath of War is their debut demo and a haunting listen that will have you hummin along before the day is through.

This is fuzzy, repetitive black metal stamped firmly with the orthodox seal. The production is lo-fi, not unlike the majority of the mother-bands’ material, and perfectly suited to this project’s sound. Amid the hypnotic reverb and ashen vocals lies a true sense of nobility. As pretentious and unfounded the premise of the demo claims to be, Akitsa have always exuded a sense of grandeur and loftiness. This is really brought to the fore with Departure Chandelier thanks to the use of synthesizer, a mix of low-end choral drones and a high end that reeks of elite, classic black metal. The highlight of the demo is the namesake track, whose repetitive and simplistic structure  allows for a flurry of glorious instrumental anomalies to shine through.

The Black Crest of Death, the Gold Wreath of War was released last year through Tour De Garde and is still available. While you’re over there, be sure to pick up other unknown, unheard gems from the TDG catalogue.