If you had to summarize Manticore in three words, what would they be?
…Ugly Satanic Filth!! 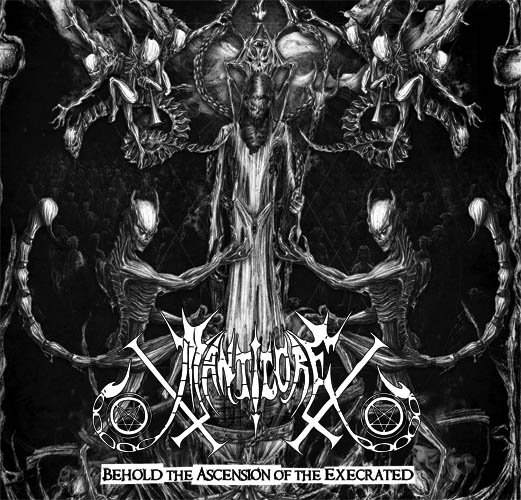 It has been seven years since Manticore’s last conjuration. For Rats and Plague held the raw, satanic death metal genre under heel for a long time. After a near decade of contenders to the throne attempting to topple Manticore’s effort (with Teitanblood coming mightily close), Behold the Ascension of the Execrated is finally complete. Self-described as “the sounds that will occur as the end of days come; noisy, raw, filthy, aggression! It is the joy that will occur as the weak are destroyed and tyranny and hatred rule over mankind once again.” LURKER is proud to present Behold the Ascension of the Execrated streaming below, in full.

The new album is coarser than any of the band’s previous full-lengths. Ixitichitl sought to create “simple, yet heavy riff-oriented metal!” and comments that “for this album the whole idea was to get back to the basics that our split recordings have always been.” The recent influx of “bestial” black/death metal bands has not directly influenced their sound either. Behold the Ascension of the Execrated never teeters over into the dull regression tactics of lesser acts; a murky production is not used to hide a lack of ideas or content. Repetition is kept to a minimum thanks to a vicious assortment of rhythms and buzzsaw guitar tactics. The maelstrom is constant and unforgiving, yet never given over to the pure chaos of bands like Revenge.

Manticore are masters of depraved, chaos-hailing death metal and have been since they released Ritual Cleansing of the Whore ten years ago. Speaking on the origins of the band, Ixitichitl reveals that “originally we wanted to create sick, dark, raw satanic death metal. It was something that wasn’t really around then, at least not how we wanted to hear it. So we set about creating something that interested us.” Aside from bands like Archgoat, Manticore were one of the first to hone this style of unhinged black/death metal and their style is one that still stands out as unique a decade later.

The album was recorded in Ixitichitl’s basement. “We just all got together on a Friday night, had the microphones set up and recorded everything live,” he said. “Saturday we got together and did the vocals; just us, the engineer, a bottle of Jack and some beers.” Devoid of gimmicks, satanic pretense and whatever else might add to the atmosphere is just what Manticore are about. They create the metal they want to hear and the reason for the seven-year break between full lengths? Well, no bullshit. Ixitichitl explains: “Things happened with all of us with: families, jobs, school, etc. We had to all take some time to concentrate on other aspects of life. Now we all are in a great spot to continue and make more chaotic blackened filth!”

Stream the album below and purchase from Deathgasm.