Is Norwegian black metal on the cusp of a new golden age? Dare I say a glorious “third wave”? At the risk of sounding excitable, all signs point to “yes”. With such bands as Vemod finally releasing their oneiric Venter på stormene in the embers of last year and Dødsengel decimating all with the satanic opera that is Imperator much earlier, it seems that a younger, sexier generation of northern darkness has at last usurped the reign from those who arguably defined the sound, and reclaimed the tattered banner from the hordes of the European mainland. At the centre of this revolution are the sons of Nidaros, led by the unbridled chaos of One Tail, One Head, Min Kniv, Mare and more. Lurking on the periphery, however, another Trondheim cult claws for a piece of the meat – Katechon. 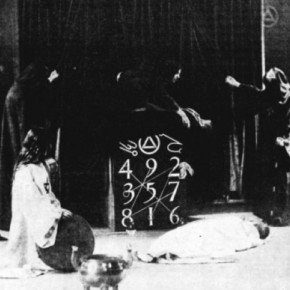 As a Greek word we should all be familiar with by now (thanks Deathspell!) meaning “that which witholds”, the name rings true as the only material available currently is a smattering of demos and rehearsals. But with a Nuclear War Now! deal inked and each track showing quality and promise, it’s hard to ignore Katechon even at this larval stage. Aside from that, the band bears a tantalising aesthetic for the occult initiate. Ominous cloaked figures, magick squares and inverted crosses grace the covers of these early offerings, leading one to believe that when a fully realised record comes to light at some point this year, it will be something worth celebrating.

Each snippet of potentiality reveals different sides to Katechon, no doubt necessary steps taken as they converge upon where to take the band. Rehearsal 2011 sounds… well, like a rehearsal, but a superb one at that. First track ‘The Ides of March’ kicks out some deliciously old-school, molten heavy metal jams with its dual lead guitar melodies and Sabbathian swagger. ‘Veaduck’, on the other hand, takes a decidedly darker turn, sticking with the doomed plod and menacing scales – but then in the song’s death throes the blast beats are broken out with just moments until the end. It’ll leave you gasping for more like a sorely unsastified bedfellow. 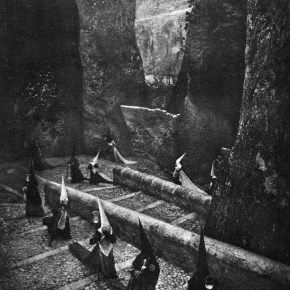 But fear not! Tape 2012 swoops in to fulfill that promise as ‘Man, God, Giant’ rides you violently to climax with a flurry of dexterous riffs, high-octane tempos and disgusting guttural vocals absent from that first recording. ‘Unbeing’ and ‘Spring of Man’ pick up the torch, charging ahead on waves of thick, chunky d-beats. Yeah, d-beats! LURKER fucking despises the contrived “blackened crust”, “DERP! LOOK ERRYBODY WE GONE DID A D-BEAT” approach that has sadly infested the minds of the rocknroll youth recently, yet for the first time it actually sounds right here. Believe. 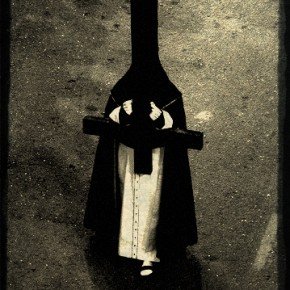 The latest output is a sloppy Whirling Dervish of razorblades called ‘Beautiful Desolation’, a rough runthrough of a track hinted to appear on an upcoming release. If one squints their ears through the hiss of the practice room and piercing cymbal strikes, there’s a hideous cacophony of punk-infused black metal just begging to be committed to a proper recording. Vocals have been drowned out almost entirely, although it matters not. Not quite black metal, death metal or hardcore but rather a stunningly honed and natural melding of all at once, whatever monstrosities Katechon give birth to in 2013, rest assured that it’s likely to be pretty damn special. Seek updates here, and listen to all their unholy rumblings thus far here.