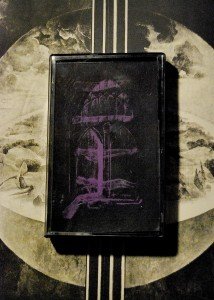 Before you listen to this demo, listen to something with a really thick, brutal production, maybe some old Swedish death metal or a new metalcore band that’s been given the Kurt Ballou treatment. Then, when you’re done playing air guitar or moshing your furniture, put on Vorde. You’ll hear an indistinct slur of guitars and vocals, a spectral swathe obscuring a clattering rock beat. Coming off Into The Grave or the like, you’ll hear just how strange the production is here – muddy, thin, and above all, quiet. This interpretation of the raw, lo-fi “necro” aesthetic is certainly a barrier to neophytes, but it’s also an enticement. You’re invited to turn it up. And when you do turn it up, it will still sound too quiet. You will probably turn it up some more. In this, Vorde makes you directly complicit in the listening experience.

A few minutes in, they drop into the first of many droning riffs based on carefully spaced chord changes. They introduce a Mayhemic arpeggio, garbled and distant but rising over the churn – a compelling minimalist theme. When they kick into double-bass, it becomes clear that, despite the watery sound, this is powerful, driven music. It was recorded in a single take, but carefully through-composed.

Now that you can resolve the riffs and rhythms, you can hear the openness of the mix – the spaces between the individual instruments, the space surrounding them. It’s less like being presented with a song than being present within one. The demo was recorded with a single microphone, like a field recording, so that it serves as the sonic imprint of its recording space. In a literal sense, that space is probably Vorde’s practice room in Bushwick, perhaps a windowless concrete bunker near the steel frame of the M train. But in an equally valid sense, it is also the imaginary space created by the music. The chief magic of this demo is that it collapses the distinction between those spaces, so that the former bleeds into the latter. We hear the music emanating from a deep grotto where, in faint torchlight, the cryptic markings on the walls become visible.

Vorde’s experiments with sound and space follow on similar work by bands like Coil and SunnO))), but this isn’t abstract, cerebral music. The second song (it’s all one track) opens with a mournful chord progression that suggests Mütiilation, but it really comes into its own with a stop – and switch – and suddenly the riff becomes a brilliant hook, hammering open chords over a ripping punk beat, like an intricate Ildjarn. It’d be easy to build the song around those two sections, but Vorde keep developing it, pushing back towards the drone that anchors this recording. This time they hold a single chord for forty seconds, periodically striking it again as if reaffirming it. There’s the terrifying focus of Darkthrone in their prime, but also the psychedelic effect of Fell Voices. That’s to be expected, though, because the drummer of Fell Voices is in this band.

From the first to the second song, the overall composition is taking on form, gathering strength. On the final song, though, that accumulated force erupts. The first riff doesn’t quite sound like anything I’ve heard. The second riff sounds like Ofermod, or Emperor, or Kvist – after all the buildup, it’s just colossal. At last the weird, vaporous textures have dissipated to reveal Vorde’s full potential as a True Black Metal band. For the rest of the song you can almost hear that gorgeous first riff echoing over the rest of the music, but it’s not there, it’s just chiming away in your head. The whole track is defined by that figure’s absence and your longing for its return.

“Vorde” is an approximation of the Old Norse for “to become,” and their music is concerned with an intensified state of becoming – occult initiation. A number of great bands evoke this kind of atmosphere, but Vorde actually enacts the ritual. The demo’s inexorable rise from inchoate invocations to triumphant lyricism is, itself, a dire transformation. And through their unorthodox recording techniques, Vorde have opened up a sonic space in which this ritual can unfold. We’re lured over the threshold, into the inner sanctum.

Check out the demo on SoundCloud, then head to Fallen Empire for tapes.