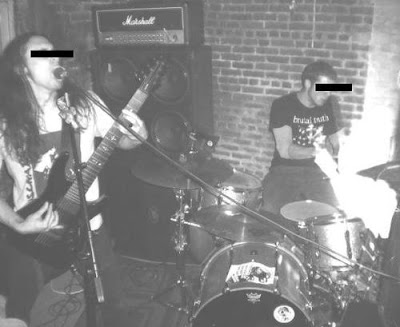 Since out last update, Dethroned Emperor have been keeping the putrid flame of annihilation burning bright with live shows, split releases, side projects and upcoming new materials. And while regressive death metal outfits propound their subject matter beyond the realms of believability and grindcore naively protests its political and cultural impotence, Dethroned Emperor just do not have any fucks to give.

Their DIY attitude ousts any satanic or pseudo-political insincerity in favour of unabashed attitude.  Slapstick brutality that fully encompasses the aesthetic of immediacy and rehearsal-jams that both grindcore and the more antediluvian branch of death metal initially offered. It is a welcome antithesis to the current trend of over-intellectualising that which should be natural, sporadic and volatile. Embrace the lizard brain. Revel in your own filth.

The problem I have with grindcore and death metal is the tendency to either over think structure, or not making the music engaging. With black metal, artists can occasionally get away with a lack of ideas by disguising it as ‘hypnotic’ or ‘repetitive’. Take Antediluvian for example, whose first full length, Through the Cervix of Hawaah, was just a listless journey across dull riff after dull riff (a shame, considering the promise displayed on 2008’s Under Wings of Asael demo, especially Solarburst).

2012 saw the band release two split EP’s. The first, New Brunswick Death Metal Alliance, is a split with neighboring death metallers Dystrophy; a pleasant surprise to stumble across acute, varied death metal legion pairing great melody with riffs that would make The Chasm proud. The second split is with local doomers Pharaoh who play a similar brand of sludgy metal to Pelican and Cult of Luna, if they were a tad angrier at the world (and have all of their material available for free download on their site). Despite the less than congenial grouping, the only similarity between the groups being location, the material is worth your time. Primordial death grind meets lofty, Isis-tinged sludge? Bizarre, I know.

Joe has also been busying himself with a side project, Death Fortress, having released the demo tape Pulling Ancient Stone through Fallen Empire records in September of last year. This is total Hate Forest worship. 100% power and domination. All things LURKER can get behind. Stream a track below. It slays. Unceasing drums, trebled out riffs and barbaric proclamations are all unbeatable hallmarks of the sound Roman Saenko mastered.

Dethroned Emperor are as unrelenting as their sound. They are currently putting final touches to their debut full length, MORAL NIHILITY, and preparing for future live shows. Get in touch and join the assault here.