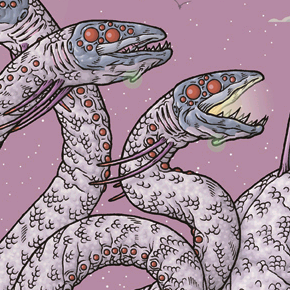 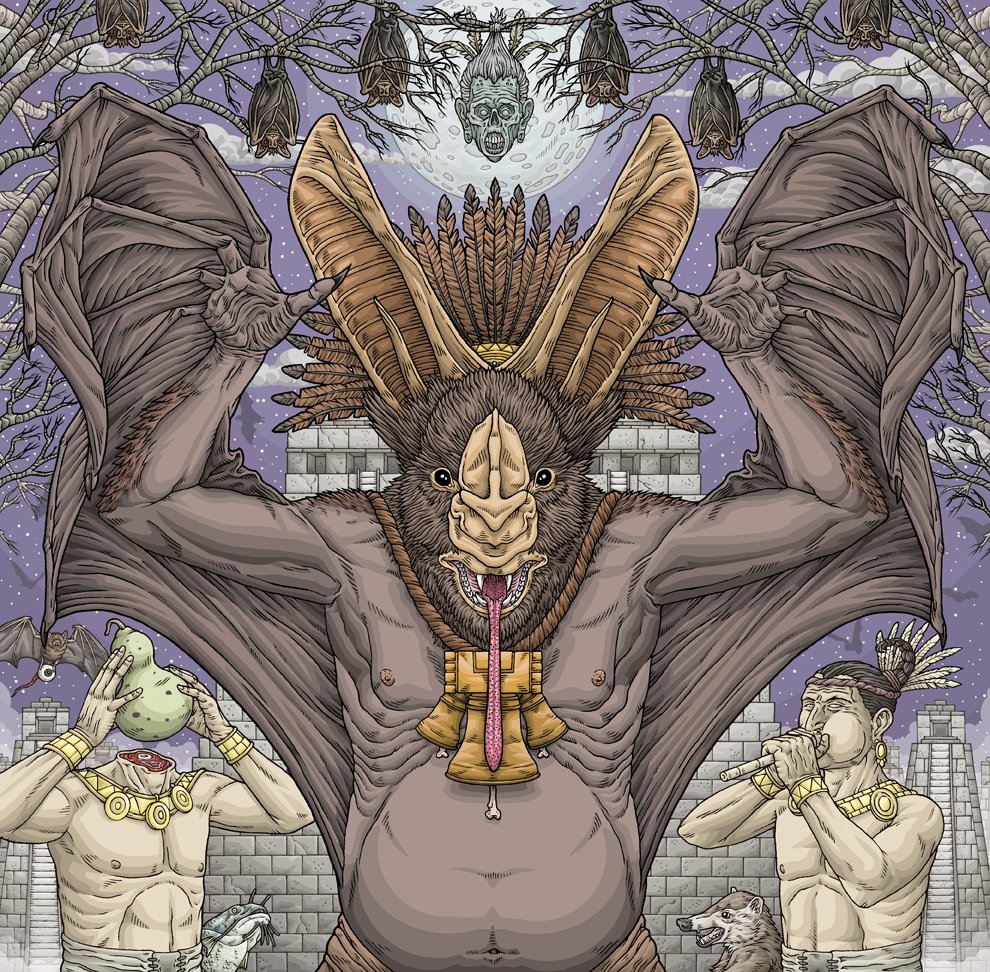 Michael Bukowski, an illustrator from Philadelphia, has been working away at a library of sketches since the turn of the decade. His goal is to create a complete bestiary of the beings that inhabit Lovecraft’s stories. His site, Yog-Blogsoth, has already catalogued hundreds. His ideas are calculated guesses as to HPL’s imaginings; he gathers visual cues by scouring the man’s library of work. Monsters described with scientific precision match up perfectly to their animated counterparts. Those with barely an adjective or setting to their name are revealed in a style undeniably Lovecraftian.

Bukowski never oversteps his welcome and never depletes from HPL’s glorious manipulation of the unknown. His work actually accentuates the Lovecraft’s ideal: weird, grotesque and disturbing limbs, colors and scales. Bukowski’s independent work, featured on Last Chance Illustration, is no less worthy of your attention either (as I hope the header and thumbnail prove!).  LURKER took some time to talk with Michael about the work of Lovecraft and how he gathers his information. What follows is a wealth of information on Lovecraft, his contemporaries and a treasure chest of links and further reading.

What made you decide to start illustrating the creatures in Lovecraft’s work?


M- Well, I think I was rereading The Horror In the Museum, a story Lovecraft wrote for Hazel Heald, and I came to the description of Rhan Tegoth and couldn’t really imagine what that thing looked like. It’s a really crazy, detailed description, but it’s SO detailed that it’s hard to visualize. I decided to try to find an artist representation of it and came out short. Then, I sat down with the story and slowly went over every aspect of the creature and drew it myself. After that it was just a fun thing I did whenever I reread a story. I would doodle one of these mind-boggling creatures. At some point I got asked to do a show of these pieces and even once the show was over I couldn’t stop. It then evolved into the blog, and the zines. 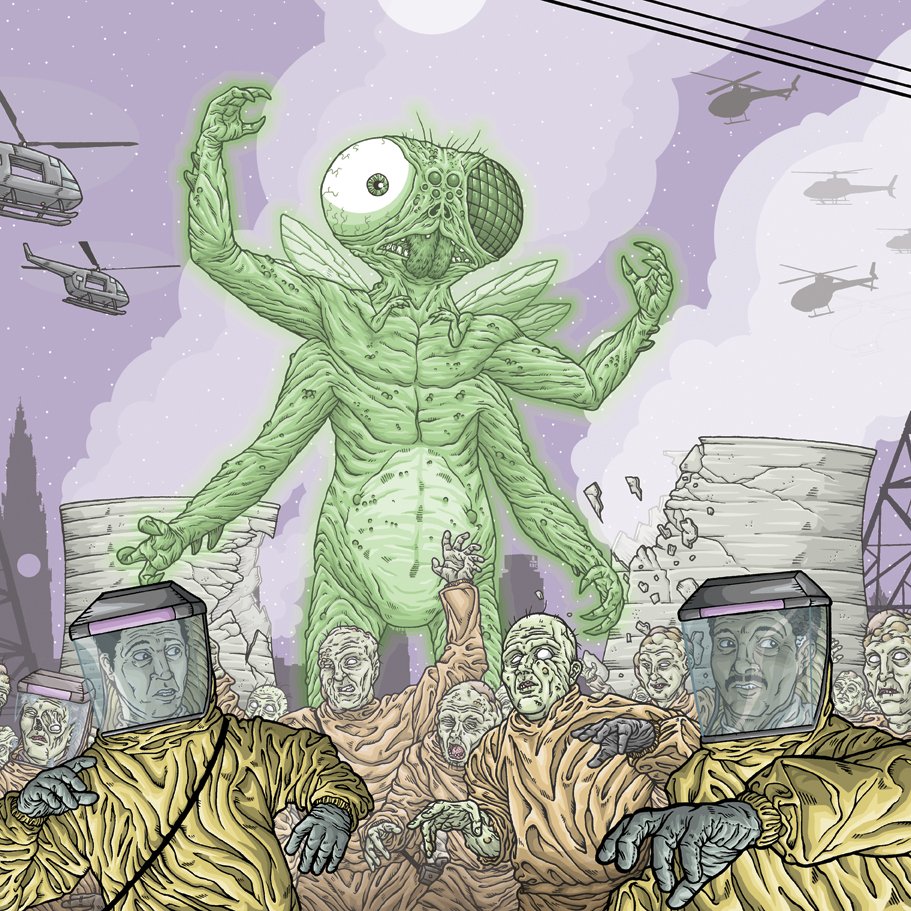 Lovecraft’s descriptions and passages all revolve around some aspect of the unknown. So aside from the now archetypal image we have of Cthulhu, there is a huge visual gap in the mythos of Lovecraft. How do you go about constructing images from the sparse descriptions?

M- For all the briefly mentioned monsters and hinted at horrors there are a few things that get paragraph long explanations. The anatomy of the Elder Things is laid out in three huge paragraphs filled with minutia. The same goes for the Great Race of Yith. So, once I got the feel of those things, I had a good jumping off point for stuff he just mentions casually. I guess I also draw inspiration from some of the historical mythology he references. I call those Old World Gods on my blog. He wrote about biblical demons, Greek and Roman gods/goddesses, Aztec and Mayan gods, a plethora of Egyptian gods and even an Aboriginal god. Once you throw all that stuff together you get a general idea of what he was envisioning and the world he was creating.

I also think it’s important to note the authors that influenced Lovecraft. Those that preceded him and were his contemporaries had a huge influence on his work and overall mythos. Clark Ashton Smith, Robert E. Howard, William Hope Hodgson, Arthur Machen & Robert Bloch have all made their way onto my blog. 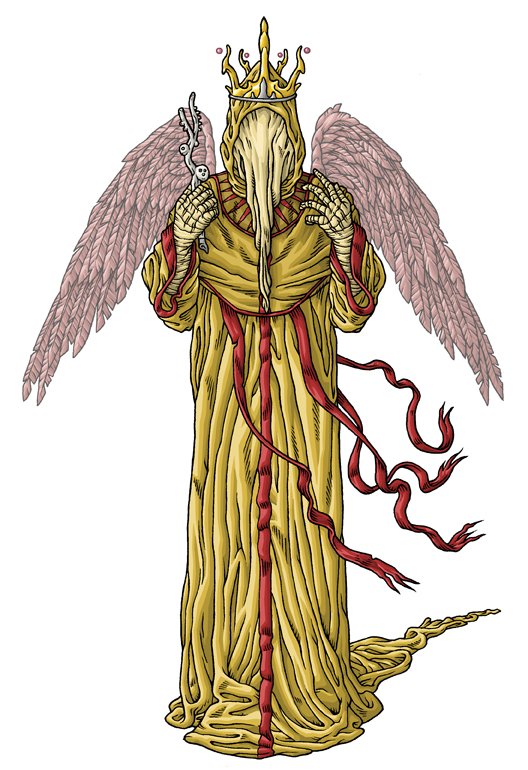 The King in Yellow (Hastur)

Given the lack of detailed descriptions in Lovecraft’s work, I’d say you’re the first to attempt to put a face to the mythos. What might you say to those that think the influence of Lovecraft lies in his use of the unknown?

M- There have a been a few people before me to attempt this, though I don’t think any of them were dumb enough to be as thorough as what I’m working on. For instance, Petersen’s Fieldguide To Creatures Of the Dreamlands is pretty excellent, even if a bit goofy. And the Call Of Cthulhu RPG guides have some cool illustrations of creatures. In fact, one of my main goals is to treat this like a cross between an old medieval bestiary and a monster manual. Which is also why there’s a TON of nudity on the blog. I’m trying to present them as animals that an explorer would have seen. When you see etchings of tritons and sea-pigs, they’re not wearing dresses or pants.

But I guess to answer your question I think HPL does rely on a combination of the known and unknown to draw you in. For instance, whenever he wrote about the Necronomicon, it would be in a list of other books, most of which were real. So, if you’re reading the story, you could conceivably be fooled into thinking this was a real grimoire. Same goes for the monsters. He gave painfully exhaustive characterizations of some things and then is just like “not altogether crows, nor moles, nor buzzards, nor ants, nor decomposed human being”.

How have people’s reactions to the project been so far? Have there been any drawings in particular that have got a lot of attention?

M- So far it’s been great! In 2011 i09, Boing Boing, MTVGeek and a bunch of other sites picked up the story and the blog blew up. I even got a few small press publishers interested in doing a book version.

As far as individual creatures that get a lot of attention Cthulhu obviously got a bunch of feedback. Most people thought my Cthulhu was too slovenly, haha. But HPL described him as lumbering, grotesque and pulpy. I guess people are used to seeing a buff guy with a tentacle head as a representation of Cthulhu. I think that’s bullshit. The weirder/grosser the better.

The zines have also been really well received. Every edition of every Volume has sold out within a week of me posting them (I do still have 5 copies of the second edition of Volume III available).

You’re preparing the 4th volume of Illustro Obscurum, which is like a compendium of your drawings and Lovecraft quotes. Can you tell us a little more about this?

M- The printed versions of the blog came about because the small publishers that initially contacted me put the idea into my head and then realized that putting out a full color art themed book with quotations (MOST of which are public domain) would be too expensive. The logistics are a nightmare. I also have a very specific way I want to present this work. Like I said before, I want it to feel like an old bestiary or grimoire meets a monster manual. So I wanted ragged edges to the pages, I wanted faux staining on each page, enough room to give the illustrations to breath, and a bunch of touches to make it personal.

As far as the actual process… I lay out the whole thing, then get them printed by a local shop in Philadelphia. They’ll print larger than 11″x 17″ for me so that I can tear the edges and still have the image size be 11″x 17″. I also get each cover printed by Awesome Dudes Printing here in Philly. Those are also printed on slightly large pages so I can tear them. After that I put it all together, staple them and use gaffers tape for faux binding. I’m happy with the end result, but my eventual goal is to have ALL these creatures collected in a hardbound volume complete with silver embossed faux leather covers and a silk ribbon. It’ll be nuts and extremely expensive to produce but I think it’d be worth it.

You must have read quite a large percentage of what Lovecraft actually wrote. What would you say is the most interesting part of Lovecraft’s back catalog? Additionally, what part/story have you enjoyed the most?

M- God, I’ve read a lot but not as much as some. I can’t get super into the poetry or the letters. That’s just too much. There’s other cool fiction out there, I can’t spend that much time ready his boring olde timey prose. I will say though that his fiction is almost all great (with a few exceptions: He comes to mind), but I really like his “collaboration” work. He would often get paid to ghost write for less talented people and a lot of those stories are really fun. It may be because I had read his better known fiction so many times that when I found the collaborative work it seemed more interesting with fresher ideas and different locations (Oklahoma instead of New England).

As far as specific stories, I will always love At the Mountains Of Madness. It really ties the entire mythos and world view together, and the creatures are bonkers! I also have an affinity for The Dunwich Horror and The Horror At Red Hook, because they have a lot of “old world” magic in them. Like biblical demons and ancient incantations. However, The Horror At Red Hook is problematic because it may be one of his most racist stories, which is a bummer. It’s a thing you definitely have to take into consideration with HPL. As much as I love his fiction, he was extremely ignorant and bigoted. The grand atheistic ideals and terrifying monsters, horrible cults with grotesque rituals are the cool parts; the racial slurs and rants about breeding are to be ignored. Ugh.

What has been your favorite being from the Lovecraft mythos to imagine during this whole process?

M- I can’t choose! There are so many fun ones! I did really like drawing The Thing In the Moonlight because it was so creepy. All the creatures from Dream Quest because they were so varied and nuts. 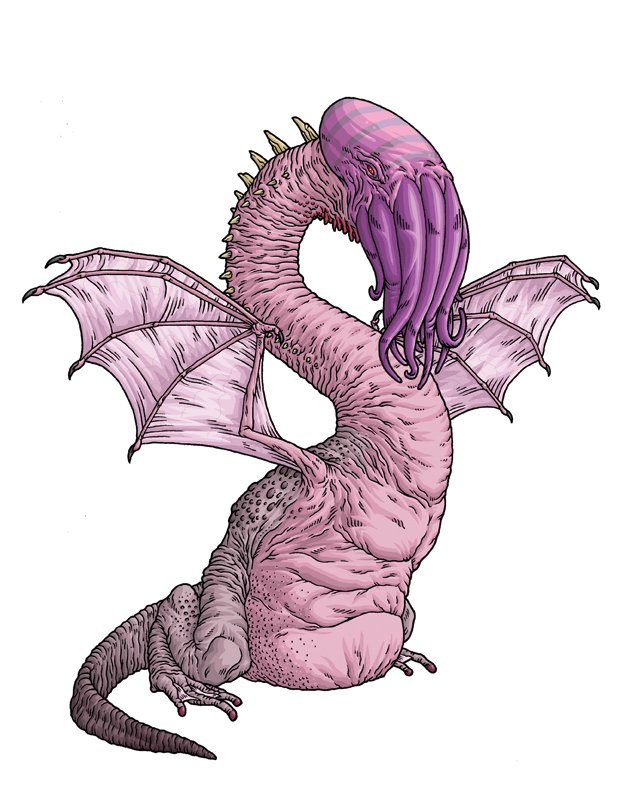 Does your musical taste follow from your literary taste? Care to share some bands you’ve been enjoying recently?

M- Kinda… While I think my work is dark, creepy and gross, it’s also full of bright colors and clean lines. And I don’t know if my musical tastes line up with that… I’ll ramble off what I’ve been listening to recently and you can decide for yourselves.

Also a LOT of horror movie soundtracks (Fabio Frizzi, Goblin, etc) and podcasts. I wouldn’t be able to keep up with the history and research of all this without The H.P. Lovecraft Literary Podcast and the Clark Ashton Smith themed podcast, The Double Shadow.

Those goblin albums are excellent. Surprised to see you enjoy some extreme metal! Have you heard of Portal? They’ve grown a bit predictable and stale in recent years but their first two albums, Seepia and Outre, are largely inspired by a Lovecraftian sense of horror.

M- I actually got to see Portal when they played in Philly! I pretty much stood there with my jaw agape their entire performance. They put on an intense show. I think the Lovecraftian aspect is one of the things that drew me in when I first started to listen to them. I mean, a band has to have be good as well as have Lovecraftian influences because what metal band doesn’t mention Cthulhu nowadays. But if a band is good and they have mythos elements, it makes it even better, haha! 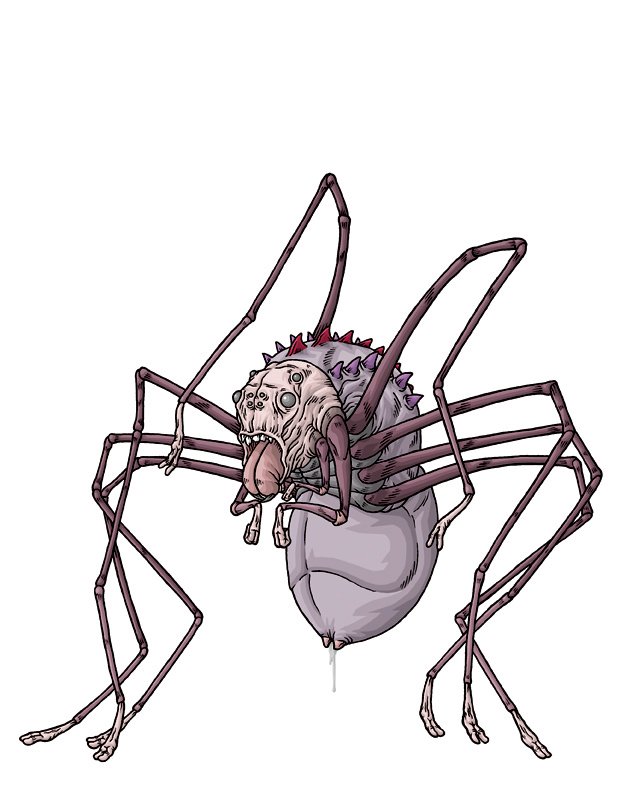 Can you tell us a little about your art outside the domain of HPL? Are you working on any other projects?

M– You can see my other work at Last Chance Illustration I mostly do work for hardcore and punk bands. There have been a few metal bands here and there and even a few horror movies. A lot of that work has the same kind of monster themes and a gross but light hearted feel.
artbukowskiHPLinterviewlovecraftmichaelyog-blogsoth