Altaar’s debut, self-titled album which came out at the end of February, 2013 has taken me a good few months to contemplate. Though spanning a mere 35 minutes split between two songs, the album is incongruously rare in caliber.

Through the evocative art of Sverre Malling, the theme of Altaar is set-upon and seized with fervent claws.
Heaving and ponderous, gloomy and veiled – this doom inspired artefact has warranted much attention from the underground. And rightfully so. Andreas Tylden (OTOH), and his coterie of veteran musicians has created a journey, no, a pilgrimage, of resonance.

Francisco Goya (1746 – 1828) painted a stunning rendition of one such pilgrimage. In the foreground a troupe of flagellants scourge their backs with thongs of Spanish leather among a crowd of fervent worshippers as they surround the great Madonna. Blood and pain being their votive offering, a spiritual emulation of the scene in the passion where Christ is scourged at the pillar. Through suffering they would atone for their sins.

Through invocations of the turntable I redeem my own. 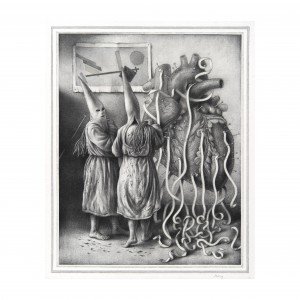 The needle strikes the groove, the familiar hiss and spit of static and dust passes as the music unfolds – we are witnessing a ritual procession. Heavy drums mixed with the reverb and squall of steel strings slovenly spill forth from the speaker, eliciting dreams of a half-forgotten Europe where terms like faith, suffering and happiness were not quantified, but expressions fully contingent upon each other. The pace is picked up, and as the smouldering tinder strikes the witches’ pyre, the pilgrimage turns crusade.

The caterwaul carves across the continent of my room. Harmony of the sinister baroque fills my mind with visions as the chattering of a harpsichord, the tremelo of guitars, and the howls of God’s acre tie the doom, the psychedelic, and aspects of shoegaze into something distinct. Something wholly gnostic.

The production is tight and layered. The story does not end after the first, second or tenth playthrough – their riffs become an opiate. Altaar requires your time. It requires your worship. Take a break, get naked, light your candles and prostrate yourself – good, you’re ready.

Here’s a tidbit. Buy it here.