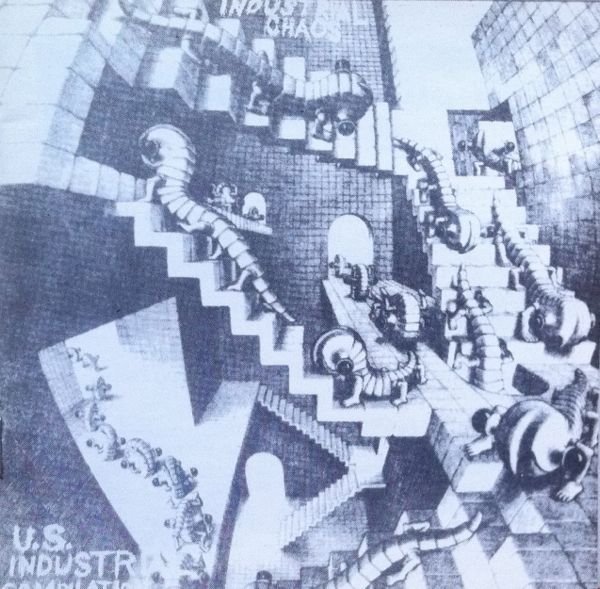 Skulking around Encore Records about a year ago, I noticed a CD from 1990 called Industrial Chaos: U.S. Industrial Compilation. The cover art featured a swarm of mechanized salamanders creeping about an Escher-esque maze – it was bizarre, disconcerting, and comically awkward. Each time I returned to the store I’d check if it was still there, and back in March I finally decided to pick it up. I have no regrets.

Industrial Chaos is an artifact from the immediate aftermath of 1989’s “industrial revolution,” when N.I.N. and Ministry brought mainstream recognition to a movement that had been incubating for years. Somebody at Nebula Records rushed to put this one out. You might expect a bunch of proto-Manson teenagers knocking off “Head Like A Hole,” but that wave of bands hadn’t really cropped up yet. Instead, this compilation documents the spillover from the 80s scene – all the bands that didn’t sound like N.I.N., but had evolved in parallel with it.

During the 80s, American kids heard the pummeling art/beat music from Europe and wondered, “Where are the guitars?” At best, this attitude yielded tough, authentically U.S. music that was neither EBM nor avant-electronic industrial. My favorite song on the comp is probably “Vasst Waste,” by some forgotten L.A. solo project called War World. It’s a mechanized reincarnation of American garage punk scuzz, played with freakout fervor. There are similarities to Chrome and Big Black, but those bands are iconically cool in a way that War World flat-out rejects. This guy pushes it waaay over the top, into a place where hilarity is indistinguishable from brilliance. Another fine exemplar of the American Industrial sound is Double D, who subject us to seven minutes of toothgrinding tweaker thrash. “Would I” is rooted in the rhythms of EBM groups like Nitzer Ebb, but it has just as much to do with raw, blues-haunted Stooges songs like “Fun House” and “L.A. Blues.”

Some bands had a more direct connection to British goth aesthetics. On “Whatever It Takes,” Lab Animals ride a fiendish 3-note bass groove for the whole song, pushing Killing Joke towards Skinny Puppy. This sounds sick, of course, but it’s also historically interesting – Lab Animals were basically an extreme, non-commercial counterpart to the big industrial-rock acts of the 90s. If they’d stopped screaming and written some hooks they could’ve been on MTV. Their loss, our gain.

Juxtaposed with these strong points there are plenty of confusing, hilariously bad songs that show how many clueless musicians jumped on the industrial bandwagon, hoping it was going to be the next New Wave. Terminal White sounds like a disco band fronted by a retarded man trying to write a British radio hit in 1982. David Kane’s Decay of Western Civilization contributes an “industrial” cover of Zeppelin’s “Immigrant Song,” complete with robovox, extraneous harmonica tracks, and what sounds like a beagle howling.  The strangest tracks, however, come from a curly-coiffed commercial songwriter named Jimmy Lifton. His “Of Mystics” is flute-heavy New Age dreck that suggests a tableau of pandas levitating rocks with their minds, while “Wired For Sound” is like the fucking Talking Heads with some limp “heavy beats.” You can imagine the game of musical telephone that produced abominations like this: “Hey, there’s this guy Trent Reznor scoring big with industrial music, it’s this heavy, funky, kinda poppy stuff…”

The only tracks on Industrial Madness that really fit a European notion of industrial are “Senselessly Beaten Fenceposts,” an off-kilter rhythmic noise attack by Static Effect, and “Testimony,” a straightforward EBM track Aural Sect, who hailed from my own hometown, Ann Arbor. These are cool and enjoyable, but not the sort of lost gems that stand out after more than two decades. In every musical explosion there are bands whose place is to be part of the moment – to bring the movement to their towns, to make a couple bangers for compilations and DJ sets, and above all to participate in something worth participating in. It’s not a glamorous position, but its an honorable one.

Musically, Industrial Chaos averages out to “mediocre.” There’s no Art here, and little that points towards unexplored aspects of the industrial idea, but it’s fascinating to hear all these traces of an underground that was instantly rendered irrelevant by the breakthrough music of its most successful bands. There’s also something prophetic about the role of guitars on this compilation. With hindsight, it’s easy to see how heavy guitars became a liability for industrial. Ministry bloated into a shameful alt-metal band, paving the way for baggy pants, and White Zombie jumped on the bandwagon, playing quantized Pantera riffs over programmed drums. It was a musical dead end. On Industrial Chaos you can hear some great examples of the guitar/beat synthesis done right, but you can also hear the intrinsic limitations of the “industrial rock” format. There are only so many ways to write a catchy song while playing three power chords over generic dance rhythms, and it quickly starts to sound like a formula, a trick that plays on cheap hybridity. Even in its early flowering, the American Industrial scene contained the seeds of its demise.

For the best of these bands – War World, Double D, and the like – “industrial” was less a genre than a guise, a trend that allowed them to express a more fundamental impulse. These groups are evidence that the spirit of American Garage Punk is eternal, oozing under the desolate flatlands and erupting again and again in new sounds and scenes. From The Sonics to The Stooges to the Dead Boys to Negative Approach to Pussy Galore and Cop Shoot Cop, from “grunge” to the “garage revival,” it will never die. And when it passes beyond rock’n’roll into true extremity, it is raw power incarnate.