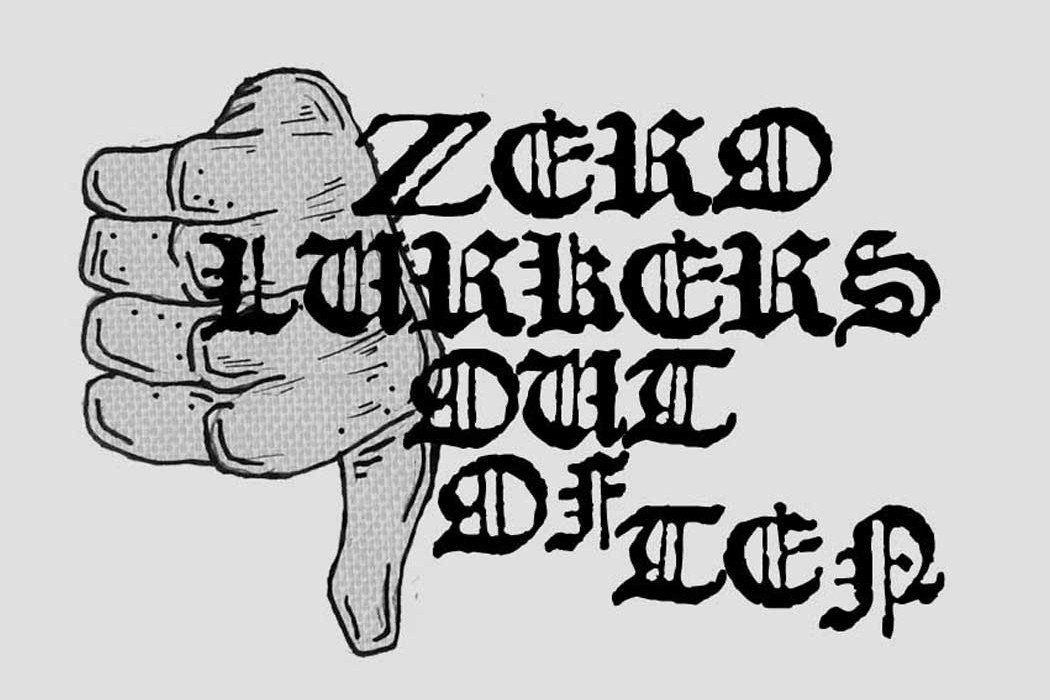 So in this column I will firstly permit myself use of the first-person personal pronoun – something that should be avoided where possible, particularly when writing about art – and secondly, complain. A lot. As LURKER relaunched last week following more than a year of dormancy, I ought to put the radio silence into context a little from my perspective. I can’t speak for the other guys but a series of misfortunate events basically led me to think, “Fuck this.” And that attitude will be the unifying theme for further pieces under the banner Zero Lurkers Out Of Ten. An utterly humourless treatise on stuff I hate. Apologies in advance.

Let’s start with a history lesson. Nick, Alex and I started a musically oriented blogspot towards the end of 2009, having graduated that summer. I soon felt a pang of emptiness; my fondest memories being 420blazin it in my bedroom while we took turns showing each other our latest musical discoveries, and extending that spirit to a graveyard-slot uni radio show during which we liked to think we were terrorising the airwaves, whereas in reality we got about five listeners a week. They were all our friends.

Founding LURKER was a convenient way to fill that void after we all moved back home to figure out what to do with our lives. In those days we wrote reviews first and foremost for ourselves and each other. It was sloppy and amateurish and really I couldn’t give a toss who else happened to be reading. Most pieces weren’t even contemporary. We’d review any record in heavy rotation good enough to demand some words written about them as a boredom buster. Heck, I remember reviewing Nefarious Dismal Orations after a night spent smoking and drinking to that album at a mate’s (now a fellow lurker) house because it’s awesome. At that point it was already two years old. Many posts also included download links. The blogspot black market was pretty good for finding forgotten relics and I’m not ashamed to say we enthusiastically joined in for a time if it meant people could be exposed to new things and the work of underrated bands could be preserved a little longer.

The sea-change came when we used some analytics software and noticed that, against all expectations, LURKER was actually getting hits. Not a huge amount, but enough for us to consider it significant. So when you develop a readership, you also start to develop a sense of editorial responsibility. Followers asked to contribute, we welcomed them and sparked firm friendships. We ceased to spread download links unless they were band-approved. We moved domain so Google wouldn’t own all our content and combed the inbox for promising releases from obscure acts in need of a leg up. There have been a few instances where artists and musicians told me that they ascribed later successes to that first LURKER post. It felt great and, more importantly, it was fun.

The blogspot black market was pretty good for finding forgotten relics and I’m not ashamed to say we enthusiastically joined in for a time if it meant people could be exposed to new things.

All well and good for a while. It was a bubble where I got to know many talented people and was introduced to loads of great new music. But problems arose when labels, as opposed to bands themselves, caught wind of LURKER and the apparent EXPLOSION of metal-specific PR firms that followed, targeting our inbox and many others with carpet bombs of hundreds of emails a week, all promising the hippest and hottest old-school-blackened-death-sludge-crust-whatever. Ugh. While many DIY websites would usually count this as success, it became difficult to discern what was actually worthwhile when they all dropped the same buzzwords and genuine messages were buried under piles of meaningless puff. Eventually I stopped checking emails altogether. It wasn’t really indicative of the music I had grown up to love – a mass of subgenres that was, in and of itself, anti-commercial. Instead I began to focus on what I found compelling and whisperings on the grapevine among the network of contacts I had built.

It didn’t last long. During that time I had been working for a large newspaper group which, as many media companies seem wont to do these days, was making catastrophic losses. Daily Fail merged it, people were laid off, my workload dramatically increased and writing stopped being fun. Coming home from a 12-hour shift with the intent of keeping LURKER updated and relevant got too much. It wasn’t a job, we had always done it out of love, and yet it started to feel like one. Cue depression, destructive ending of a long-term relationship, and subsequent existential crisis.

But the nail in the coffin, the actual FUCK-THIS-SHIT moment, came months later when, totally out of the blue, I received a message to my personal Facebook account from Darren Toms, who I assume runs promotion for Candlelight Records these days. A massive imprint for the kind of music it releases and one responsible for a few favourites over the years. I promise we’re getting to the crux of this article now. It read thus:

“want to explain to me how

“you better have a good explanation

…do not point the finger at a fanzine you gave promos to freely when they didn’t even ask for it. Just because you sent an email does not mean that we are obliged to give a fuck.

This came understandably as a rather unpleasant shock. Not only had I not listened to Altar of Plagues since their debut full-length White Tomb in 2009, but I had no knowledge that it had been sent to us, no knowledge that they had a new record coming out, nor did I have any interest in reviewing it or even listening to it. I also expect a certain professionalism in this kind of discourse, of which there was none. Grammar, punctuation, and spelling exist for a reason. Some guy called Stewart Love – who I must also assume works for Candlelight – messaged me soon after, saying: “Ur a silly boy!!” YEH M8 TOPLEL XDDDDD WHO RU

“I don’t know,” I responded. “I haven’t been involved in this stuff for a good while. Haven’t downloaded it myself nor even looked at the lurker inbox for months. Basically, you’re talking to the wrong person.”

But I still felt a degree of responsibility. A friend told me there was a TWITTER UPROAR, O woe betide, heavens forbid (I don’t really use Twitter). I don’t agree with album leaks and I don’t like it when they happen so I sought to hear from staff who were more active. Nothing. I did a bit more research.

“Right. I’ve checked the inbox. Was this email sent March 28? From you apparently.”

“On my screen at least it hasn’t even been opened. Everyone I’ve heard from so far didn’t know we had been sent it, or doesn’t like the band and hasn’t listened to it either.”

“it is marked as downloaded by someone at that email \”

Fast approaching complete exasperation and unwilling to believe that my friends would lie about it, I could only suggest that the security of our email had been compromised if, indeed, he was telling the truth. We even went so far as to find the leaked torrent online and gave Mr Toms dox on the user responsible, to whom LURKER had no connection. And then silence. A few days later I sent a follow-up asking for more information because I legitimately feared that I would be taken to court and sued for everything I owned… over something I did as a hobby – for no money – in my spare time – alongside an exploitative less-than-£20kpa job. 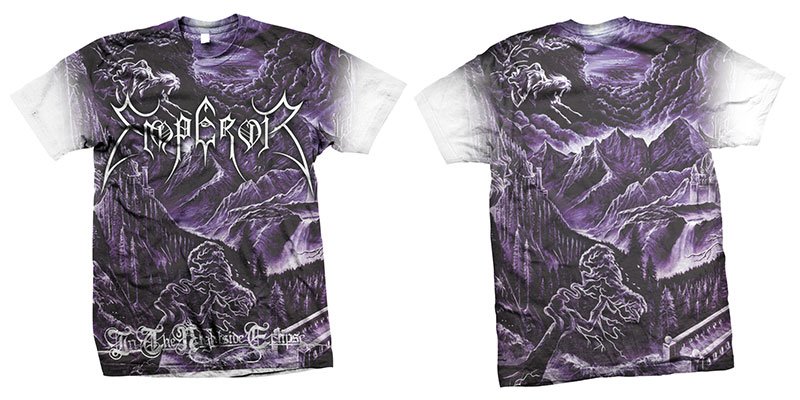 Another prime example of Candlelight incompetence and capitalist greed. Way to make an abomination out of a genre classic, guys.

But I never heard from Candlelight again and I STILL haven’t checked LURKER’s email since April 5, 2013. Unsurprisingly I’ll likely never bother with Altar of Plagues again either. It appears they’ve broken up too, and not on account of a leak I hope. This event raises some issues in my mind.

i) We were used as an easy scapegoat. If they actually had strong evidence through this “watermark” system, I’m sure we could have and would have been subject to legal action, although I remain unconvinced that their story against mine and my living situation could stand up in a court of law.

ii) Someone did hack our email as a publication known to receive promotional material digitally, downloaded a bunch of stuff, hid their tracks and leaked albums. But this just starts to sound far-fetched.

iii) Does sharing a promo among writing staff count as leaking? I’ve always felt unsure about this. But mainly…

iv) IF YOU DISTRIBUTE PROMOS THIS WAY, EXPECT AND/OR PREPARE FOR LEAKS GODDAMN IT. It’s 2014. Dish them out or don’t, but do not point the finger at a fanzine you gave promos to freely when they didn’t even ask for it. Just because you sent an email does not mean that we are obliged to give a fuck.

It sets an unhealthy precedent. There’s a dearth of true criticism when it comes to underground music and I don’t want to become an extension of these scorched-earth PR campaigns. What I’m trying to say is that this strong-arming by labels towards the exact people who make up their target audience leaves a bad taste. I’ve seen through the veil. This episode made me want to give up, to go back to being a normal music fan who happily listened to albums in privacy as he bought them, not telling anybody what he thought because, honestly, why should they care?

But people do. They asked where we’ve been, why we stopped. Apparently we were missed. So we’re back because it’s humbling that lurkers do want to know what we think. The above is an insight into my sabbatical but I’ll endeavour to keep it up for now. And maybe I’ll even check our emails every once in a while.