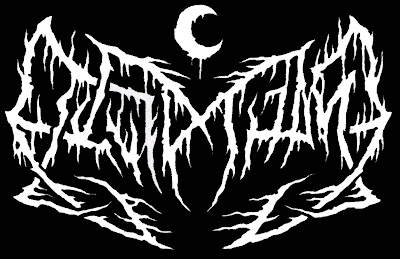 Leviathan began, according to Wrest, as “a notebook for myself” way back in 1998. To date Leviathan has released over 15 demos (including uncatalogued material from post-‘Tentacles of Whorror’ that remains largely unknown), 3 full length albums, plus incalcuable amounts of splits and compilations. If you’ve heard the double disc release ‘Verrater’, which provides us with some of the more popular material from the demos, then you have a rough idea about what is to come. The main problem for me regarding the Verrater release is the material therein represents almost too cohesive a summary of Wrest’s back catalogue. Songs have been renamed and edited, re-recorded or transformed. These other, less travelled, more obscure and cavernous paths of Leviathan present some of Wrest’s influences with more clarity; titanic Gorgorothesque riffs from the gruff palm-muted stereotypes of heavier metal in the earlier demos through to the burzumic keyboard arrangements and startling cold melodicism that propagate the latter demos. All the while maintaining the ethereal floating majesty and penchant for colossal atmosphere in Wrest’s newer, more organic material. Whats interesting is his development and mastery of slower, mid paced pieces towards a faster realm of metal as chronology grinds ever gracefully onward. Prepare to hear influences from Swans, Bauhaus, Lungfish, Der Black Metal 1337, as well as math metal tendencies. Herein lies the oppurtunity to study each page of Wrest’s ‘notebook’ and discover some hidden gems that have long been pushed aside, as well as embracing the foetal forms of his ideas. Each demo has appeal within its own context and I encourage any fan of Wrest’s latter work to embrace his fledgling roots, delve deep into a psychology of turmoil and give these a download.

Suicide as metamorphosis. Suicide as the realization of not being meant for this life. Suicide as self-strength, not self-pity. Many are the walking dead, unaware that they suicided themselves long ago. Humans are one of the few animals that contemplate suicide. They should take advantage of this.

Notes of interest: Demo I was intentionally unreleased – disputed to contain material Wrest claimed ‘too immature’ to make available. Rumour has it Demo 8 ‘Video Brolo’ was made widely unavailable too, however, this is the original, not the fake copy that has been making its rounds on the internet over the last 2 years (the fake, being essentially a rehoused version of demo 4 ”Misanthropic Necro Blasphemy’) – 8 represents a slower, more experimental vibe to Wrest’s work. ‘Howl Mockery at the Cross’ differs from the Moribund compilation release of the same name in that it remains a stand alone demo. Demo’s XIII, XIV, XV and the albums ‘Tenth Sub Level of Suicide’ and ‘Tentacles of Whorror’ share alot of songs and ideas. ‘Verrater’ includes reworkings of the audio and titles of numerous songs. ‘Sacrifice Love at the Altar of War’ is not a demo, it is a compilation of tracks found on ‘Seven & Slaveship’ and ‘Inclement Derision’.