Dub Buk is no longer among the living. After releasing its album Tsvyach in March this year, it became known that the band would not put out any more records, nor perform any live shows. So ends the life cycle of a band that changed its sound radically over the course of a 17-year existence. After inaugurating its career with expeditious black metal in the vein of Slavonic masters Nokturnal Mortum and Veles, the group showcased a more thrash-like approach for its iconic Rus’ ponad use! album, appropriating said style more emphatically with each subsequent release. Dub Buk’s epilogous Tsvyach album may have little in common with the early material on a technical level, but the sincerity and vociferation that run throughout the band’s entire discography have always made for an unmistakable sound.

Now that Dub Buk has played its final notes, we have an excellent opportunity to look back on its impressive output. Because even if there is little hope that we will ever see a new album cover bear the Dub Buk logo, the band’s oeuvre still deserves to be discovered by future generations of metal fans in Ukraine and beyond.

Soon after forming in 1997, Dub Buk proved that it meant business, releasing two excellent demos respectively called Misjac pomsty (1998) and Zasinae ta uvy sny pomirae (1999). These releases were nearly identical in sound and were soon re-released as a compilation named after the first demo. This could be considered Dub Buk’s de facto debut album, and it already displays some of the traits that would also manifest themselves on a good chunk of the band’s ensuing output. Prominent keyboards and vocals, high tempos, and varied compositions result in 37 minutes of music that refuse to grant the listener a moment’s rest.

In 2002, the album Idu na wy! saw the light of day. Echoing the words of Svyatoslav I Igorevich, it enriched the group’s legacy with a more pronounced Ukrainian nationalist theme (most obviously on the track “Slava Ukraini!”). On a musical level, it perfected the style of the demos and even expanded that sound by subtly introducing electronic sounds and other such unusual elements. These were precursors of the experimental tendencies of Dub Buk, and a bad omen to those who had hoped the band would settle for releasing the same type of album ad abundantiam.

Soon it became clear that this relative newcomer to the Ukrainian scene indeed had even more up its sleeve than high-quality renditions of classic ’90s Slavonic black metal. Initially playing keyboard-laden black metal akin to the first Nokturnal Mortum albums, Dub Buk gradually moved ever closer to thrash metal. It was the mix of these two competing influences that quickly set Dub Buk apart from the emerging atmosphere-oriented Ukrainian black metal rooted in the efforts of Roman Saenko and his associates. And it was the same clash of styles that stood at the centre of the most unusual album that was put out under the Dub Buk moniker: Rus’ ponad use!

There are numerous reasons why Rus’ ponad use! (2003) must be considered a quintessential album for Ukrainian black metal. First and foremost, it marks one of the first times a band struck a perfect balance between black and thrash elements ever since black metal started moving away from its thrash roots in the late ’80s. Furthermore, the album shows the true purpose of the evolution of a band’s sound, whether it is through experimentation or switching genres; with Idu na wy!, Dub Buk had already got as close as possible to perfecting the Eastern European pagan metal sound, so there would have been little point in exploring that theme even more without at least expanding the band’s scope. This intrinsic need to renovate is the direct opposite of experimentation for its own sake, whereby bands simply incorporate the latest gimmicks into their music, hoping that it will help them win over a new audience overnight. Contrast this to Dub Buk, whose members broadened their horizons simply because it was the only way to move forward artistically.

What is remarkable about Rus’ ponad use! is the immediate success of the new approach. There are few things Dub Buk could have done to create a better album with the ideas they had, avoiding the fate of even a great a band such as Nokturnal Mortum, who needed to improve across multiple albums before they finally nailed their current sound (Mirovozzvenie / Weltanschauung did much more justice to the folk influence than the lukewarm Nechrist). Rus’ ponad use! is fast, venomous, radical and determined. With amazingly varied songwriting that throws in your face one great riff after another, the album sets its teeth into the listener from the very first note and does not let go until the last. Meanwhile, ingredients from black, thrash and folk metal, and even techno intertwine to a point where it is difficult to pin any song down to just one genre. It is this explosive yet fragile balance that makes the album so exciting and unpredictable. 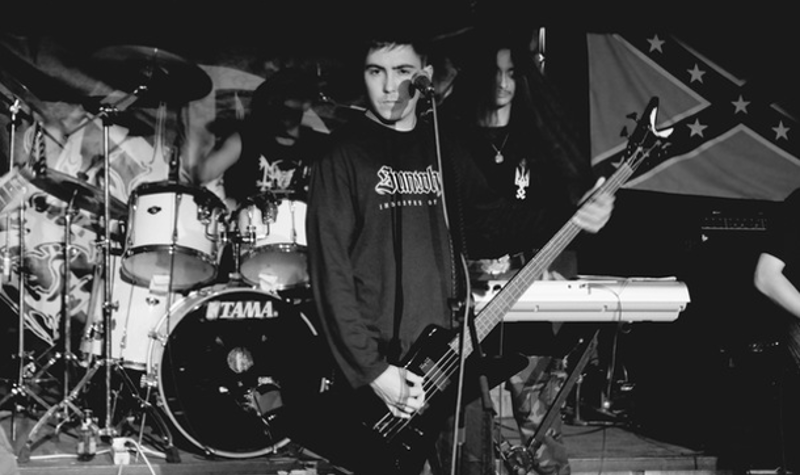 A long time passed before Dub Buk followed up its Rus’ ponad use! album. It took a staggering seven years before Merty soromu ne ymut’ (2010) saw Dub Buk head off into an even more thrash and folk-flavoured direction. During their hiatus, Dub Buk members had become involved in several other projects, such as Munruthel and Ungern.  When they finally decided to focus their combined energy on Dub Buk once more, the album that resulted from these efforts seemed a tad obligatory; it lacked the raw force and sense of urgency that had granted Rus’ ponad use! its toxic charisma. Instead, Merty soromu ne ymut’ was tame and comparatively slow-paced, and offered less surprising, less memorable songs. Folk and thrash influences were more present than ever before, but they were implemented in the song structures in a more conventional manner. This effectively eliminated the ‘clash of styles’ dynamic that had been the source of the previous album’s bipolar vigour.

In retrospect, Merty soromu ne ymut’ was but a stepping stone to Dub Buk’s final release, Tsvyach (2014). This album showcases the group’s capability of playing pure, filthy thrash that drops the folk and melodic black metal influences (the keyboard is not even present any more), opting instead for fast, energetic songs that fully uncover the band’s appreciation of Slayer, and also remind of various early thrash/proto-black metal bands from the ’80s such as Kreator and Sodom. While the sound from the Misjac pomsty days have all but disappeared, Tsvyach should still be considered a typical Dub Buk release; it remains loyal to the band’s core values of breakneck tempos, outspoken, uncensored lyrics and aggressive, right-in-your-kisser vocals. With this observation, we can also sum up Dub Buk’s appeal: throughout its career, the band has always remained distinct and instantly recognisable. This amount of character can only be claimed by a few metal bands across the globe, and Dub Buk is undoubtedly one of them.

Looking back on the musical output of Dub Buk, it remains somewhat of a mystery why the band has always had an obscure existence on the fringe of Ukrainian black metal. In Eastern Europe and beyond, only a handful of people have dug up Dub Buk from the deeper layers of the metal underground. Fortunately, those who have heard of Dub Buk almost unanimously praise their music. Even in the West, where usually only the most famous Slavic bands (Drudkh, Graveland, Arkona) encounter any success, there are many music critics who hail Dub Buk’s efforts. Those who hear their music tend to praise it. But the problem is that not enough people know about the band. Maybe their radical lyrics scare off potential promoters, or their attention-demanding sound makes it unfit for the ‘easy listening’ that an increasing amount of metal fans demands. Whatever the case, we can only hope that Dub Buk will benefit from the Vincent van Gogh effect, meaning that their efforts will be appreciated by a large audience after their demise.

Here lies Dub Buk, a band that didn’t give a fuck.

Dub Buk is such a valuable band because it embodies to perfection the potential advantage Eastern European artists have over their Western brethren. Countries such as Ukraine, Russia and Belarus harbour many technically trained and otherwise talented musicians who are less bound by the pop conventions that are so deeply engraved in Western music. As a result, they have at their disposal a wider array of possible influences and musical ingredients with which they can enrich the base structure of black metal. Not to mention that traditional music has a stronger presence in modern-day Eastern Europe than it does in Western countries such as the Netherlands and Germany. When we thus look at Dub Buk’s blatant disregard to stick to the norms of ‘tasteful’ rock music, as well as their inclusion of unusual influences that Western bands would think about twice before evoking, we can only conclude that Dub Buk is not a project that could have emerged anywhere else in the world. Widespread appreciation of their work could inspire more bands to stay true to themselves regardless of what the world may think. In the long run, the world will always appreciate true individuality and character in art.

It is now 2014, and the grave of Dub Buk is still fresh. Much like a tombstone, Tsvyach stands tall above the scrambled soil. It marks the completion of Dub Buk’s gradual transition to a thrash metal band. Whether the group’s decision to plunge onto its own sword has anything to do with the conclusion of this transformation is unknown, but it does grant listeners the feeling that the cycle is finally complete. And whatever may have motivated the band members to call it a day, they have one hell of a discography to look back on. “Here lies Dub Buk, a band that didn’t give a fuck.”

*This Dub Buk eulogy was written at the request of Atmosfear magazine and published in its November issue in Russian. The English version was published exclusively on Lurker’s Path with kind permission of the magazine.*

Note: After writing this article, a rumour surfaced that Dub Buk will reincarnate as a new band that carries the same name as Dub Buk’s final album. We shall lurk with vigilance.