Earlier this summer, VICE – the news website responsible for capturing, among others, Malefic’s autism on camera – published an editorial by Theis Duelund. The article can be compared to previous ‘think pieces’ calling out the black metal hive mind on its rampant bigotry. Noisey testified of this sentiment when one of its editors was crudely laughed out of a bar for bringing up Deafheaven, the only black metal band that has so far employed zero viking letters in its song titles. Music journalism hasn’t produced an exciting new voice in years, so why did VICE‘s article provoke a collective howl of discontent from the metal community?

“Somebody smash this cunt’s face with a brick. Its a fucking weak low quality bait by some bed-wetter on his man period who doesn’t even know how to string a fucking sentence together. Duelund, you might write about “extreme music” but you have missed the point entirely. fucking false ass poser bitch go read Lurker’s Path or Black Ivory Tower or fucking Trial By Ordeal you fucking pussy piece of shit. I would piss on you IRL for being such a terrible journalist, bitch motherfucker. #REKT”

– Commenter @degtBIT on Twitter about a day ago (Grammar has been corrected, which sounds wise-ass even though we left some errors in anyway ’cause WHO CARES RIGHT? – Mr. Ed.)

VICE’s spiteful and onanic code of conduct has kept a very tight lid on the true motivation behind the editorial; pretty much the only thing we know is that “Protecting the Precious Flower That is Black Metal” was meant to hop onto the recent bandwagon of defining worldwide phenomena such as metal with a few simple buzzwords. Allegedly, the main reason why black metal fans reject the band Myrkur is because its sole musician is a woman. Cultivating a smear campaign against metal isn’t unusual, but this article seems to have dropped from the sky. Who is Duelund, and why is he so angrily furious at black metal? The answer has to do with some unsurprising old problems and a handful of disturbing new trends in the world of music journalism.

Once online speculation had identified the writer, internet savvy metalheads figured out that Duelund is probably a fils de pute who likes to disguise his yellow press amateurism as as intellectual contemplation.  This Los Angeles-based scenester is, according to himself, a ResEarCh AssiStanT at Playboy, a magazine dealing in shopped, frankly boring teeny bopper visions of eroticism. Still shrouded in outrage, this quarter revelation nonetheless sparked controversy, re-igniting the tired conversation about integrity, the dead horse that music critics most love to beat. As one theQuietus pundit put it: “We can only assume this is clickbait, not proper journalism. De Mysteriis Dom Clickbait, if you will.”

Let me be straightforward and honest and state for the record as of now that I, myself, am personally at the moment one of the people very incredibly excited for this kind of journalism. This article holds incredible promise. This is high-tier (DID I SAY INCREDIBLE?) bait; poorly written, convoluted, suffering from a glaring lack of knowledge, but still set to rake in a lot of hits and advertising money in the Buzzfeed tradition (think Upworthy, Cracked, ThoughtCatalog). As a limp-wristed ignoramous in a world dominated by complacent editors, Duelund has the potential to be more than an appalling nuisance; the sensationalism of his writing suggests he is an emerging instigator of butthurt in the field. 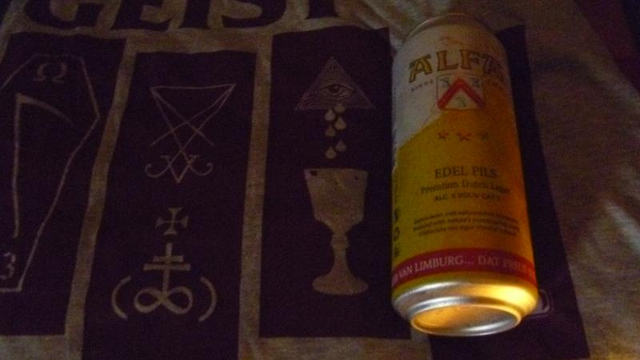 A beer having metal feelings. Image via a flikker who likes Urfaust

Rather than condescendingly exposing Duelund’s writing for the abhorrent horseshit it is, I bring up his success in attracting clicks because it has game-changing potential to plunge black metal coverage into new depths by cultivating this obnoxious ‘outsider-looking-in’ perspective to a point where having any knowledge on the topic at hand is a disadvantage for those who want to get their writing noticed. Duelund’s impact is possible thanks to the generations of journalists who have neglected their duty and turned their profession into a synonym for slander and deceit. Finally, being a journalist no longer means coping the burden of “proof”, “audi alteram partem” and other infantilizing diminutions that echo the trade’s general discomfort with writers who discuss matters the existence of which was unbeknownst to them a week earlier.

But Duelund is not the first writer on black metal to cause a scene; earlier in 2014, an ambitious blogger burst into the online arena, publishing a lengthy hit piece on Swiss extreme metal masters Bölzer. Despite injecting black metal writing with a new-found political correctness by opportunistically employing ‘guilt-by-association’ tactics, the author was widely mocked for his pansy-ass posture: Look, a sociology drop-out writing about black metal!

“It matters because VICE have made a point to hide the author’s credentials because they knew nobody would read his shit otherwise. Having your facts straight means a lot to readers, so it’s best to state baseless assumptions as infallible facts even though your sources are random people on the internet. Readers want to be able to take your word for it, so the last thing you want to do is citing someone who actually studied the position of women in black metal who directly contradicts the entire point of your article. That might lead them to conclude that black metal fans reject the music of female solo project Myrkur on the basis that it is the same gentrified, watered-down Neigecore buggery that has been flung at them for years without pause. And that is just a whole lot less exciting than the assertion that black metal fans hate the music because it was crafted by a woman.”

Perhaps wisely recognizing that it is impossible to negate their lack of understanding of black metal, VICE has taken a different approach to its coverage of the genre. Appearing in the mold of a think piece, their intentions are concealed by an aggrieved, pseudo-progressive worldview, which sees them waddle in vocabulary that is meant to establish a sincere concern with social issues. But by distracting the reader from the true purpose – by attempting, as it seems so far, to keep them from seeing the reality that a considerable part of their output is the result of their rookie journalists not being able to fit into a scene that does not give a fuck about them – VICE makes an effective attempt to fool its readers into thinking the writers know what they talk about.

It’s hard to not read the nearly-immediate backlash against Duelund as a reminder of the scene’s seemingly bottomless intolerance of flannel shirt-wearing hipsters pretending to be experts on black metal after learning about Euronymous through Wikipedia’s ‘random article’ button in 2012, but the black metal community’s beef also has to do with a misguided disdain for pseudo-intellectuals. There’s a long proud tradition of nerds embracing sincere attempts to have their music recognised as a proper artform. What sets black metal apart is that it is so controversial that wannabe academics have to nerf it first before they can safely accept it into the artistic community.

Twenty years ago, a handful of bored Norwegian rich kids engaged in lengthy conversations about cornflakes in the record store of Mayhem guitarist Øystein Aarseth (better known as Euronymous) and were for one hot minute considered the most spoiled kids in Scandinavia (due largely to predictably absurd memes that ensued). When ringleader Kristian “Burzum” Vikernes brutally murdered his former friend Euronymous and burned down several ancient churches (and went to jail for fifteen years), the future dilemma for American suburban white kids was solidified. On one hand, black metal would make for an exciting new way to piss these kids’ parents off. On the other hand, they would not want to be identified with the extreme views and actions of the bands that were largely responsible for creating the genre’s characteristic sound. By murdering Euronymous, Vikernes gave black metal the power to confuse former punk scenesters by providing them with similarly filthy music, while not having the common decency to totally diffuse its impact with a naive faith in superseded utopic ideals.

In a time when magazines and blogs have developed a habit of catfishing audiences by creating controversies and blowing anecdotes out of proportion, Noisey‘s resident scribe Jonah Bayer describes mother site VICE‘s article with careful positivity: “It shouldn’t matter if the entity called ‘Theis Duelund’ has his facts straight, or if it is an elaborate, market-tested experiment emerging from the cynical desire to piss off niche audiences for advertising money.” It shouldn’t matter, and it doesn’t. I would argue that the publication of this article is making journalism, or specifically tabloid-style hit pieces, profitable again. He proves that you need not be hindered by an absence of knowledge, integrity or skill, as long as you can come up with cheap clickbait that rubs enough people the wrong way. Duelund is creating a new work method within the rigid confines of journalism and so far it has been pretty lucrative.