Sometimes you stumble upon great things by accident. For instance, my introduction to metal fanzines can be wholly attributed to the sheer limitless of my pubescent stupidity. One time when I was 14, I once again went to the only worthwhile record store in town to engage in the sacred ritual of blowing my monthly allowance on metal CDs. With only 20 euros ($25) to spend, there were generally two options. I could either buy a proper album for 16 or 17 euros and convert my remaining assets into candy, or get an EP or some shitty bootleg for a tenner and reserve some money for the merch and various other oddities on display at the same store.

What cheap record I bought that day only the metal gods know, but I do remember seeing a magazine simply titled ‘Slayer’. That happened to be the name of one of my favourite bands. ‘Surely that cannot be a coincidence’, I reasoned with all my boundless teenage wisdom. So based on the assumption that this was a magazine dedicated to the band Slayer, I got my hands on issue #13 of Norway’s (in)famous and now defunct Slayer zine. That this magazine didn’t exactly concern Kerry King & consorts became obvious as soon as I came home, skimmed through the pages and beheld obnoxious interviews with black metal bands on pages livened up with illustrations of desecrated graves, severed penises and other such merriments. Just what the hell was I reading?

When I got over the initial disappointment of the magazine not being chockful of… articles on why Slayer is a great band (I don’t know what I expecting), I did come to enjoy the magazine for its honest, carefree and personal writing. Although this experience did not quite motivate me to become a feverish zine collector, it did familiarise me with the concept of the fanzine, of which I had previously been oblivious. This knowledge would pay off eventually.

Last year, a few thoughtful readers of my personal website recommended I publish my writings in print form, so I figured I might as well give it a whirl. After all, the worst thing that could happen was some poor kid accidentally spending half his allowance on my rambling (and subsequently becoming enlightened by it). Since then, I published my first issue in July of this year and temporarily shifted the focus of said website to being a promotional platform for the print edition. Print killed the internet star. Who would’a thunk it?

More importantly, my rag proved an excellent trading item for other underground metal zines, helping me finally free my inner zine hoarder after all these years. It quickly became clear what I had been missing. The personal style of underground zines (most of them are one-man operations) allows you to bond with the author much more than a regular magazine would. There is generally little pretence and you can rest assured that the author is sincere. He uses his zine to channel his passion for music, so he has no interest in hiding his opinions behind the veil of objectivity.

Besides, you have to be a tad crazy to want to publish your own magazine in the first place. The idea of holding in your hands a physical object with your own words in it will surely appeal to anyone with an ego, but to actually bleed yourself dry of energy and money to make that happen requires nothing short of masochistic zeal. And is there anyone who would question the honesty of a madman? 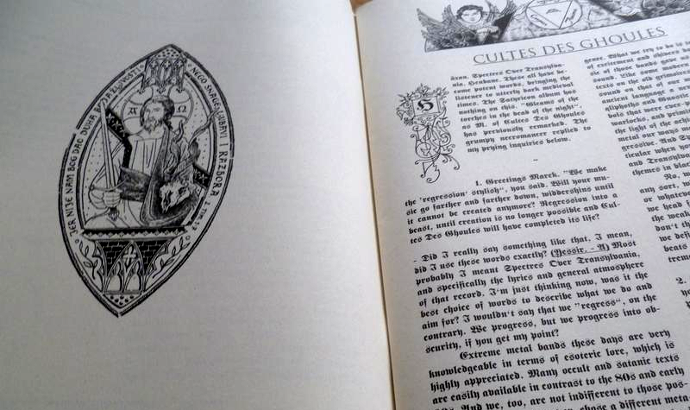 In psychology, the concept of projection proposes that a portrait may more accurately reflect the personality of its painter than the person being painted. Similarly, a fanzine will tell you at least as much about its author as the bands he interviews or reviews. Therefore, the diversity of fanzines is as staggering as the variation between people from all over the world. Zine editors typically have little concern over adhering to conventions to stay competitive, nor do they have a reason for petty considerations of what the target audience might think. Fanzines deliver straight-from-the-heart writing that, while often sloppy and unpolished, liberates us from the bland uniformity of big-time magazines.

Because that’s the beauty of fanzines: there’s something out there for everybody. It was a true Revelation to see Call From The Grave finally offer a mature perspective on extreme metal from a Christian point of view. Equally refreshing was the brutal honesty delivered throughout War On All Fronts, a publication I enjoyed so much that I contacted its editor Buarainech to contribute some reviews to its upcoming third issue. Meanwhile, the latest issue of the long-running Witchcraft magazine is more documentative in its approach, and boasts a design that leaves many professional zines biting the dust in terms of quality. Then there is a publication such as Black Metal of the Americas, which tries to offer a more academic, politicised view on black metal. While I personally do not like it for various reasons, at least it’s divisive; it stands for something. That’s always preferable over remaining on the sidelines waiting for something to happen.

Of course, people running blogs and websites, like zine editors, are also free to write whatever they want. Then what gives the print medium the edge? Simply put: the threshhold. If you have the desire to spout shit, all it takes to publicise your vulgarity is an investment of three minutes into creating a WordPress site before you can start contaminating the internet with fiendish hit pieces on your most abhorred artists.

The moment you find a good zine and stick with it, the metal experience has a whole new dimension to it.

Publishing your writings in print requires you to stick with ideas over a longer period of time, automatically requiring you to give them a lot of thought, which ideally contributes towards having removed the rough edges of retardation by the time you send your order to the printing company. Sure, there is still crap out there, tons worth of it in fact, but the knowledge that the culprit in question put his sweat and hard-earned dough in delivering that crap to your doormat somehow makes it more tolerable than having to endure the gratuitous rants of some random kid on the internet.

Anyone who enjoys not only listening to metal but also reading about it should definitely try getting into the zine scene. It’s a much more effective way of finding like-minded people for editors and readers alike. Moving from online to print made me realise just how many people appreciate what I have to say. And as a reader, I’ve already experienced that wonderful ‘so-there-are-people-like-me’ feeling more than once. The moment you find a good zine and stick with it, the metal experience has a whole new dimension to it.

Maybe if I hadn’t bought Slayer zine by accident twelve years ago, I would have been much more reluctant to the idea of unleashing my own rag, and the whole thing might never have happened. So you see, your mistakes can lead you to great things from time to time, so make sure you embrace them. And that’s as close a New Year’s message you will get from Lurker. Have a good one.