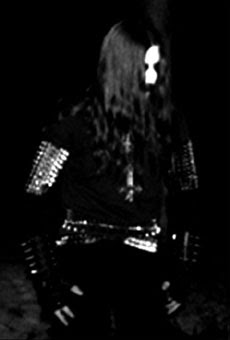 ‘Depressive Black Metal.’
It’s a term many are inclined to cringe at. Over the last decade or so, the style has acquired a stigma as the black metal equivalent of ’emo,’ where adolescents cry about the futility of life and their apparent will to end it all. In the wake of successful acts like Xasthur, it has also become somewhat chic. And we all know that chic is the mortal enemy of all black metal.
I suppose I have to agree with the above to some extent. It’s a stereotype perpetuated by the bands who wish to make this kind of music themselves. A petulant self-centredness and a half-baked philosophy on the nature of life, death and meaning make many bands of this ilk seem… well, pathetic really. However, at the core of this music lay a once vivid, beating heart and if you ever listen to just one depressive black metal band, you should probably make it Denmark’s Make a Change… Kill Yourself.
Heh. Of course I know what you’re thinking. Ridiculous name right? Well, yeah. And no. Wherever this band gets mentioned and discussed in the ignorant swamps of internet forums there’s always someone who spouts off about the name with obviously no intention of ever giving the music the time of day. The barely coherent babble of ‘lol emo band lol shitty name lol shud take his own advice xDDDD’ seems all too unaware.
Make a Change… Kill Yourself is not a musical reflection of despair and hatred turned on the self. The scathing nihilism of the statement is inflicted upon the other, upon the herd-mentality that is surely undermining the potential and power of the free-spirited individual. Ynleborgaz’s vitriolic delivery of the lyrics wages an endless, bloody war upon religion, government and blind materialism. The standard black metal romance of ‘a dark and violent age where no Christian life will be spared’ is also a welcome ideological mainstay of the work.
Make a Change… Kill Yourself mould this mournful despair into music that is as beautiful as it is sombre. The nordic folk touch and 2nd wave stylings of Ynleborgaz’s other project, Angantyr, are also present here, yet in the funereal context of MAC…KY this translates into harmonious and colourful cascades of interweaving guitar parts that would not sound wrong if played by a string orchestra. The pace is slow and somnolent while the guitar still tremolos ahead at a mid-pace buzz. It’s almost a subversion of the slow, heavy guitars in counterpoint with the blastbeat drums that funeral doom legends, Disembowelment, pioneered 20 years ago. The distorted wall of sound is bolstered by a soft bed of synths lurking beneath, where between songs these become dark ambient drones reminiscent of the mysterious Twin Peaks. A magnificent testament to a dismal existence, as I listened to the album today and the last drone faded from hearing, a light snow began to fall. Excellent. 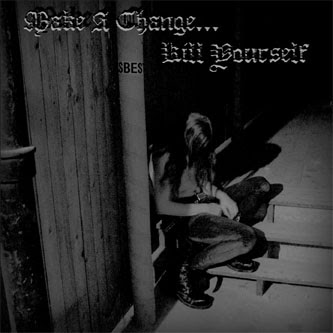