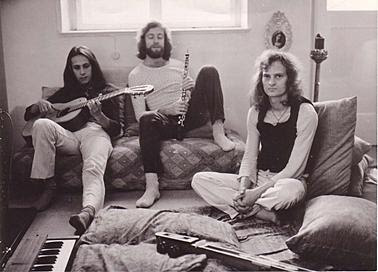 The Popol Vuh is a text of great antiquity, narrating the mythistorical religion of the K’iche’ people, a Mayan tribe native to Guatamala. It is also the title of one of the greatest musical groups to have come out of the German krautrock scene. The 70’s were a period of unprecedented sociopolitical and spiritual change as the counterculture movement took hold. Anarchist communes sprung into existence across Europe, wherein small communities of young adults would experiment with art, music, drugs and spirtuality. The wonders of Far Eastern mysticism became a point of interest for these artists, leading them to divulge in ancient religious texts to redefine their narrowed perspective at the hands of a typically conservative mid 20th century.
Hosianna Mantra was the third studio album by Popol Vuh, a band undoubtedly born out of this enlightenment of the artistic underground alongside other flagship krautrock commune band, Amon Düül I and II. Founded by the keyboard virtuoso, Florian Fricke, Popol Vuh initially began as a proto-ambient, electronic project; the first to employ the use of Moog synthesizers in Germany. This was short lived however. By the release of Hosianna Mantra, Fricke had returned to acoustic instruments and a decisively ethnic musical style that spanned the extent of human civillisation and culture. The instrumentation featured on this record is diverse and beautiful. Indian tamburas drone beneath articulate electric guitars that almost mimic human speech and song. Delicate and flamboyant pianos are wound tightly around clarion oboes and a gorgeous female vocal performance. Percussion is delightfully absent, giving this release the blissed-out, psychedelic atmospherics ideal for whiling away those midnight hours, joint in hand.
The religious theme of this album is self-evident. The cover features a painting of a woman in a style evocative of renaissance depictions of a certain venerated virgin. The title too takes ‘hosianna’ from Christian practises, and ‘mantra’ from those of Hinduism, melding them together as one. Fricke explained his reasoning behind this as a belief that, ‘basically all religions are the same. You always find it in your own heart. And the music of Hosianna Mantra is really touching your heart. It is made to touch your heart. That is why you can call it a Mass. A Mass for your own heart.’ The esoteric atmospheres Fricke and his bandmates employ gives the album a ritualistic feeling, and by the end of a session with this release I dare you not to feel purged, cleansed and at peace. 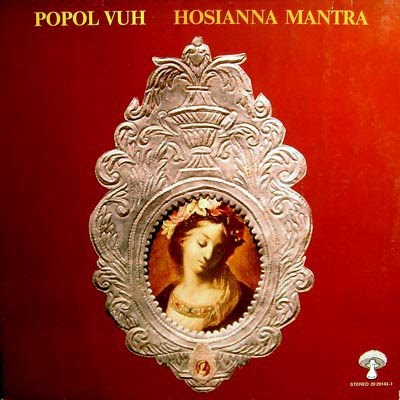