One of many strange explorations in black metal that we’ve received recently. The key word here is “bedroom black metal” so you’re either going to love it or hate it. Personally, I take a lot of pleasure in wading through this kind of stuff so it’s always rewarding to find something with potential.
Based in Minnesota, Mἄrsh specialise in a rather beautiful and lo-fi experimental black metal but the main hurdle before appreciating it is the drum machine. Mἄrsh lack Blut Aus Nord’s subtlety although the record does employ many engaging rhythms. The album’s beginning stumbles slightly under the weight of overpowering percussion, but it’s pulled back from the brink by an intriguing and melodious riff. I’m also pleased to say the drum levels seem to dissipate over the course of the album. Mἄrsh’s attack varies across eight tracks from the shoegazey, ethereal and uplifting to a jarring and dissonant aggression. On close examination of the music, there is no doubt that the people behind this project are talented musicians. Guitar parts are complex at times and the melody in each riff is addictive. The rigid drum machine is crudely bent around dynamic and bouncy riffs, giving the release an industrial jackhammer assault.
There’s a great sense of progression and originality throughout Life’s Contradiction… but without a doubt the album’s highlight is the more ‘traditional’ track, Thoughts From Different Plains. Out of the droning gloom a furious little riff blasts it’s way through and transports you to glacial peaks, despite the shitty recording values.
If you’re seeking refuge from the produced glitz of Nightbringer’s new album and looking for something a little more homegrown, Mἄrsh’s debut is a curious gem. It was originally released in the incredibly limited amount of 25 cassettes but see if they can’t hook you up with a copy. There’s also a 2009 split with Lonesummer available from Starlight Temple Society. 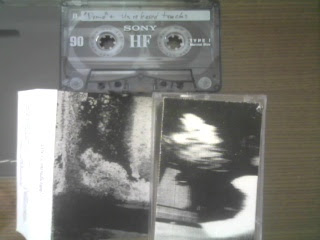