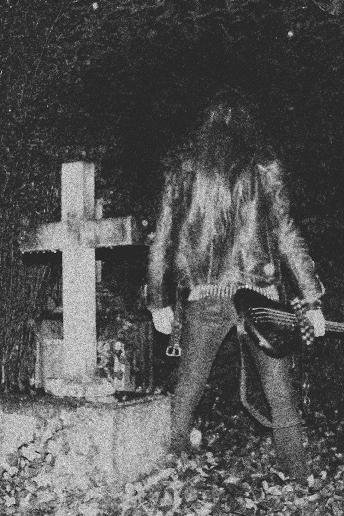 …melancholy is a fearful gift. What is it but the telescope of truth?

Nortt commands the impenetrable veil of night and nothing. After manifold displays within his perfected sphere a stillness followed 2007’s Galgenfrist. The ‘pure depressive black funeral doom metal’ I had so willingly submitted myself to for solace had retreated from the underground consciousness. By no means returning from the abyss, Nortt agreed to unshackle some of my curiosities.

There has been silence on the Nortt front since the release of Galgenfrist back in 2008. What is the current status of Nortt, and can we expect any murmurings from your camp in the foreseeable future?

Indeed there has been silence. Intentionally I might add. The current situation of Nortt is that a new full-length album is in the making. All the music and all the lyrics have been written, and two tracks were actually recorded back in the winter of 2008/09. By now, the path seems clear for the final recording in the autumn. I cannot, however, reveal a release date, as I take things as they progress. Nevertheless, I predict, very cautiously, a release in the winter 2011/12. Though every time I have predicted a release date, it has always been postponed.

What fuels the melancholy and sorrow at the heart of Nortt’s music?

I’m not sure if there is any sorrow in the heart of Nortt, as I try not to mourn. Semantics, I guess. Melancholy, however, is sort of a close companion of mine. Something I can always turn to. It is hard to describe, as people might – understandably – interpret melancholy as a negative thing. I’m not sure that is the case for me, as a melancholic state of mind is sort of a refuge from the world. It takes me to a place where life is less significant, where darkness prevails, which oddly gives me tranquillity. As I see it there is no tangible fuel. It might simply be brain chemistry, something psychological that I’m not aware of or too much black gall. I don’t know. I’m just melancholic by nature. But I’m not sure that is a bad thing. This instant I’m listening to Solstice The Man Who Lost the Sun: “I want to feel this way / I worship the night and despise the day”. It somehow sums it up.

Was there ever an underlying intent or direction to the work of Nortt? Can you elaborate on the story of Nortt – from the no doubt tumultuous beginnings through to these recent hermetic years?

In the beginning it wasn’t particularly thought through. I remember that I wanted to express myself artistically. I had, and still have for that matter, difficulties in communicating with most people, so art was a means of expression. It might as well have been through painting or literature, but music was my art and not least my main inspiration. But I remember that it was the desire to express myself and to create a universe that I could relate to that drove me. It was not an urge to be a musician, to be heard or to achieve something in particular. There was never any great master plan of making seven unholy albums and then set the world ablaze. I liked the darkness, the solitude and the atmosphere of creating and listening to depressive music, and that universe became very personal and dear to me.

Is there a certain process behind the construction of a Nortt release? There is a depth and character to your work that evades the majority of projects in this field.

There is not a certain process, not explicitly at least. I use a lot of time on the musical details, the subtle details, which requires a lot of attention from the listener to actually hear. I listen to the same pieces over and over again. Not just in the studio, but also during nightly walks, and that is usually how ideas of artwork, titles and lyrics appear. I just take my time and evaluate the material until everything reaches an entity.

As someone who is clearly at arms with media-fanfares and attention, how did you respond to the interest surrounding, and, process of the Galgenfrist release with Avantgarde?

The interest that followed with “Galgenfrist” was somewhat overwhelming. Of course overwhelming is highly relative and subjective as I overwhelm easily. If I have two emails in one day, I feel smothered. Anyway, I had to turn down quite a few interviews and cut off some of my music related correspondences, as I didn’t want to spend hours each day replying interviews and e-mails. I dislike that side of running a band. After having released an album, I feel like my work is done. I might appreciate a few interviews just to tell the main thoughts behind the album, but I don’t care to elaborate on it again and again. I also dislike too many different editions of an album, although I understand it from a label’s point of view, but a plain CD and a plain LP is sufficient. Avantgarde Music is no doubt a great label, I would surely recommend them, but they are just a tad too commercial for Nortt.

What is your current opinion on Black Metal? Is experimentation and the broadening of horizons killing the spirit, or is it revitalising the corpse?

It depends on how you define the spirit. If it is a subjective spirit, your own perception, then it is up to each individual to either try to keep the spirit alive or face the inevitable death. If music doesn’t live up to your personal criteria of the spirit, then don’t listen to it. If you want to be set back to a period when your idea of the spirit was thriving, just listen to the records from that particular era. If the spirit is more objective, the scene in general, I guess the result of experimentation and the broadening of horizons is twofold: It kills the spirit and revitalises it. Any spirit connected to a musical scene will die eventually, but it is still present in the old records. With experimentation comes great failures and great originality, and you can just cherry pick whatever you like. I don’t care to revive or conserve the old spirit. The scene, like everything alive, needs to evolve, otherwise we would just listen to the old records and poor imitations of them. Of course evolution kills the old spirit, it is a law of nature, but it gives life to something new. If you don’t like the new spirit – or the lack of spirit – then what? Whine about it? I’m not conservative on this matter. I simply listen to music that possesses a spirit I can relate to and then I throw the rest away. There is no doubt, though, that the greatest spirit-killer is the Internet. It more or less killed the underground, but it surely has its advantages as well.

I am aware of your opinion on being asked for philosophies and answers to the mysteries of life in interviews. Nonetheless, how has this long road with Nortt, and indeed life in general, shaped your outlook?

I don’t actually mind being asked philosophical questions, but I don’t like when people misunderstand or misinterpret what I say. A lot of these misinterpretations might be my own fault because I failed to define something thoroughly, or because I have taken a new standpoint, which may contradict an old standpoint of mine. One needs to choose every word very carefully in order to leave as little room for interpretation as possible, and I’m not particularly skilled at that. Anyway, it is hard to say. The relationship between Nortt and the person behind Nortt is so closely connected. I have obviously become older and hopefully wiser, but it actually surprises me how little the outlook of Nortt has changed throughout the years. It is still the same misanthropic, nihilistic, worship of death and darkness that is the essence of Nortt.

Care to reveal some art (music, literature, visual) that you have found solace in over these last few years?

I don’t really like to share that sort of information, as I have experienced that people put too much emphasis on the titles I mention, which sort of relates to the topic of misinterpretation. Just because I mention a particular title doesn’t necessarily mean that I’m deeply inspired by it. And if I were asked the same question tomorrow, I’d probably give a different answer. Personally I also find the movies and the literature other musicians enjoy deeply irrelevant. I simply don’t care. Unfortunately I haven’t had the time to read fiction in many years, so I can’t mention any. And I’m not really a movie enthusiast either; I don’t research movies for example. Furthermore I don’t buy that much music anymore. I tend to feed off my old collection instead. However, just to contradict what I just said, the last records I bought was Deathspell Omega “Paracletus”, 40 Watt Sun “The Inside Room” and Shining “VII: Född Förlorare”. The first one is a great example that experimentation can lead to great originality; the second one is a great example that experimentation isn’t necessary in order to make an impressive album and the third is a great example of how a genuine artist is able to create almost a new genre.

Which Nortt release do you cherish most, and why? Is there a release, or period in Nortt’s discography, with which you are unhappy?

I think I like “Ligfærd” and “Galgenfrist” equally well. They possess a depth and so many fine and subtle details that the older recordings lack. Listening to those albums in headphones in a pitch-black room is like an audio journey. The first two demos are not particularly good, which is why I never had them re-released. I also think “Gudsforladt” could have been a lot better if I had left a few songs out and used more time to arrange the songs in a more varied way. A better production would also have helped. I think there is some really strong material on that album that never reached its full potential. But there isn’t anything that I’m unhappy with.