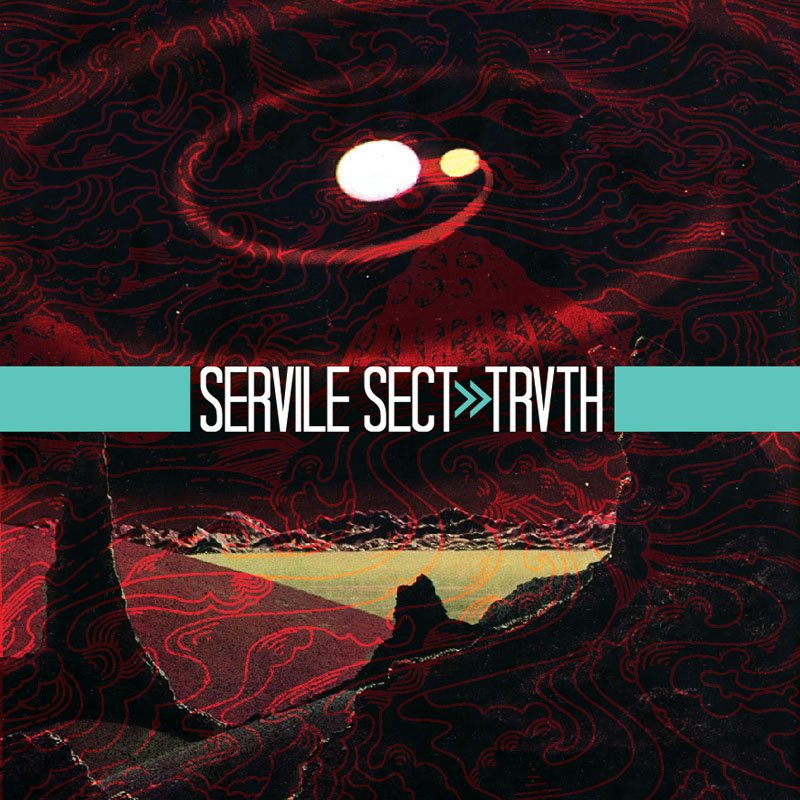 Fans and reviewers alike are often hell-bent on pigeon-holing and isolating projects into crisp, neat fragments of genres and sounds. It aids the critic to explain the sound through words; it gives the fan a sense of identity and belonging within the infinitude of musical possibility. It also seeks to undermine and belittle the craftsmanship behind those boundless artistic works that help to evolve and adjust these very social constructs. Step back. Comprehend the entirety of the landscape before you. This compartmentalization of abstract concepts and objects is an inevitable part of the human experience. Tethered to language. Hounded by a tropophobic civilization. Label it. Make it comfortable. Nothing new to see here. Move on.

Servile Sect is, inevitably, birthed from some genre-specific formula of influence and the parallels are, at times, easy to draw. What elevates their music above and beyond the coils of compartmentalization and inhibited thought is not easy to isolate. Trvth is a monument in its own right. Weaving together a vast canvas of influence that begins with psychedelics, passes the cosmos and lands in the wilderness of self induced free thought – Servile Sect are large in vision and large in sound. Surpassing the rudimentary hallmarks of ambience, noise, psychedelic hues, drone and black metal (all lazy comparisons when it comes to the blitzed euphoria that lies at the center of these drones and rhythms) to birth one of the most unique and intriguing records of the year.

It can be hypnotic – but certainly not solely because of the psychedelic cadence that permeates the field recordings, for the black metal movements of the song are equally hypnotic.
It can be euphoric – though not due to the crystalline clarity that seeps through during moments of climactic intensity, since the shuffled, fuzzed and meandering field recordings are light-bearing enough.
It can be aggressive – the relentless ‘solar storm’ assault that out shadows the majority of the second side is justification enough. Yet to hint at this during the more relaxed, trip inducing first side? How can this even come to be?

It is a unique experience. It is avant-garde in the sense that it innovates: there is a path that lies ahead. Too often the avant-garde label has summoned visions of dead ends, projects born in the fire and dying in the ashes. They have ideas that are interesting for one or two albums before dissipating. I get a different impression from Servile Sect. Trvth is a joy to experience. It is an experience that plays on manifold moods and feelings without every growing tiring. It is an experience that I forgot music could antagonize. Available over at Handmade Birds.

The story of Servile Sect is an interesting one. LURKER interviews Luke and Nhate.

– First I’d like to ask how this collaboration 3000 miles apart came to be. What was the writing/recording process of ‘Trvth’ like?

Well, we haven’t always had this huge physical distance between us. Servile Sect started out in 2005 while we were both living in Phoenix, Arizona (we now respectively live in Humboldt, California and Brooklyn, New York). In like ’95 or ’96 we used to skate with two or three other dudes who drew inverted crosses and baphomets on their skateboards. We’d skate and talk about metal non-stop. One day we met at Nhate’s and he had a gnarly Mayhem ‘Live in Leipzig’ poster in his basement. When we realized that we both dug Mayhem, we immediately started a metal band. The two of us stuck together and have been consistently making heavy music ever since.

(Luke) The writing/recording process for TRVTH was pretty far out. It was a collaboration much further than 3,000 miles, it was more like 8,000! I spent about a quarter of 2010 in Nepal and was fortunate enough to have a decent internet connection to exchange sounds with Nhate. I had a recording interface, a shitty guitar, a sequencer, my laptop and some other small gear. Nhate and I put together a sound library of samples and ‘noise’ recordings before I left. I was able to gather a ton of meaningful field recordings while I was there, so we had more than enough material to work with. Fortunately a large amount of the Hindu Nepali strongly believe that marijuana/hash is respectable and reliable “path to God”, so my pockets were always full of the stuff. Between that and the extreme experience that is daily life in a country like Nepal, ideas were rampant. After the first half of TRVTH was recorded, I went to Rishikesh, India. I wandered the Maharishi Ashram compound everyday for a couple of weeks (it’s a super vibed-out spot where the Beatles were staying and studying transcendental meditation while doing plenty of drugs). About their time in Rishikesh, John Lennon said: “We wrote about thirty new songs between us. Paul must have done about a dozen. George says he’s got six, and I wrote fifteen“. It’s a pretty incredible spot. I mixed the first side of TRVTH there on my laptop while chain-smoking spliffs under an old tree with an epic view of the Ganges. Pretty blissy.

The second side of TRVTH was recorded in February 2011 between New York and Humboldt. Our old friend Robert Nelson (who we’ve known from way back in Arizona) did a few tracks of drums for the record. Joshua Convey (from ITHI) contributed some bass guitar parts. James Plotkin mastered everything and he really made the mixes sound great.

– Care to attempt an explanation of Servile Sect’s music to our readers?

We both grew up listening to insane amounts of black/death metal so those sounds naturally pour out of us. Andee from Aquarius Records called it “Psychedelic Alien Black Metal”. We like that and it seems to fit well.

– Is there a fundamental ideology at work in Servile Sect…A raison d’être for making this unique strain of music?

We’ve always been drawn to metal because of the values it tends to harbor and embrace. From a very young age we have despised capitalism, religion, and all systems destroying fun while enslaving humanity, forbidding independent thought and making life miserable. Our music has always been a direct reaction to our worldview and our inability to participate in this collective reality. Obviously our personal experiences with psychedelics tend to set the theme as well as our obsessions with everything surrounding The UFO.

– The artwork on ‘Trvth’ beckons as many questions as it answers. Is this intentional?

This was absolutely intentional. We (SS and K.G.Y.) collectively feel that the artwork is thee visual-extension of the album’s overall experience. It should leave the participant asking questions and potentially reaching answers based on their individual perceptions. The artwork/packaging considerations were a product of free-reign in the hands of San Francisco-based artist Kevin Gan Yuen (viraloptic.com, Sutekh Hexen). We initially provided Kevin with several thematic concepts, he spent some time brainstorming with his own ideas and within a few weeks he blew our minds. We couldn’t be happier with the result. It’s out there for sure!

– It is obvious you draw inspiration from non-musical territory. What are some films/books/experiences that have shaped the project?

Terence Mckenna has been a massive influence! His insight is unparalleled and his ability to put impossible-to-grapple-with thoughts into language will never be matched. The dude would lecture for 12 hours without notes or a break! We both get a huge kick out of the Carlos Casteneda books. He really co-created his own reality in a monumental way and had tons of great ideas that we really vibe with. We’re obviously pretty down for old sci-fi too… The adapted series of Ray Bradbury’s The Martian Chronicles is fucking awesome! Dead Man by Jim Jarmusch has always been a favorite, and of course The Holy Mountain by Alejandro Jodorowsky.

Loosely, it was just how we were feeling when we started this project – Trapped in corporate 9 to 5 jobs that we couldn’t stand. Slaving away for a dream we had no part in. Banding together a few nights a week to make our brand of music and ignore the traps we were stuck in. Fortunately we have both moved on from that point in our lives, for the most part, but the name Servile Sect still embodies our frustrations with life, the knowledge of our traps, and our plans to escape them.

– 2001: A Space Odyssey:
The parallels between “The Monolith” and psychedelics are really awesome. The idea of something being utterly unknowable, yet still ‘being’. Psychedelics are like that in a lot of ways… The soundtrack for 2001 is absolutely painful though. There is a version with music by Spiritualized that is much more enjoyable.

– Faith:
Faith isn’t something either of us can subscribe to. Direct personal experience? Facts? That’s where it’s at. Terence Mckenna’s brother Dennis McKenna puts it well, “Critical thinking is not encouraged, asking questions is not encouraged. It’s all about ‘Here is the doctrine and you must accept it, and you must accept it on faith’. If you have no faith, you’re lost – you know? And that’s the whole thing – faith is essentially asking someone to accept a premise, or a set of ideas, or something without any evidence – and without asking too many embarrassing questions about it.”

– Objective truth:
Suchness, is-ness, pure-being – what’s actually happening right here and right now regardless of awareness, opinion, judgement or perception. It remains completely unaffected by subjective truth because it is The Truth and Trvth just is.

– H.G. Wells:
He shook up humanity with his stories and ideas at a critical juncture in our development. He believed in an “emerging new consciousness” that would lead humanity to a new, peaceful utopian world. He was a visionary in a similar way to George Orwell or Aldous Huxley. He was so prophetically accurate that people called him “The man who invented tomorrow”. RAD!

Here is a super sweet excerpt H.G. Wells wrote in An Open Conspiracy that is very relevant:

It seemed to me that all over the world intelligent people were
waking up to the indignity and absurdity of being endangered,
restrained, and impoverished, by a mere uncritical adhesion to
traditional governments, traditional ideas of economic life, and
traditional forms of behaviour, and that these awaking intelligent
people must constitute first a protest and then a creative resistance
to the inertia that was stifling and threatening us. These people I
imagined would say first, “We are drifting; we are doing nothing worth
while with our lives. Our lives are dull and stupid and not good
enough.” Then they would say, “What are we to do with our lives?” And
then, “Let us get together with other people of our sort and make over
the world into a great world-civilization that will enable us to
realize the promises and avoid the dangers of this new time.” It
seemed to me that as, one after another, we woke up, that is what we
would be saying. It amounted to a protest, first mental and then
practical, it amounted to a sort of unpremeditated and unorganized
conspiracy, against the fragmentary and insufficient governments and
the wide-spread greed, appropriation, clumsiness, and waste that are
now going on. But unlike conspiracies in general this widening protest
and conspiracy against established things would, by its very nature,
go on in the daylight, and it would be willing to accept participation
and help from every quarter. It would, in fact, become an “Open
Conspiracy,” a necessary, naturally evolved conspiracy, to adjust our
dislocated world.