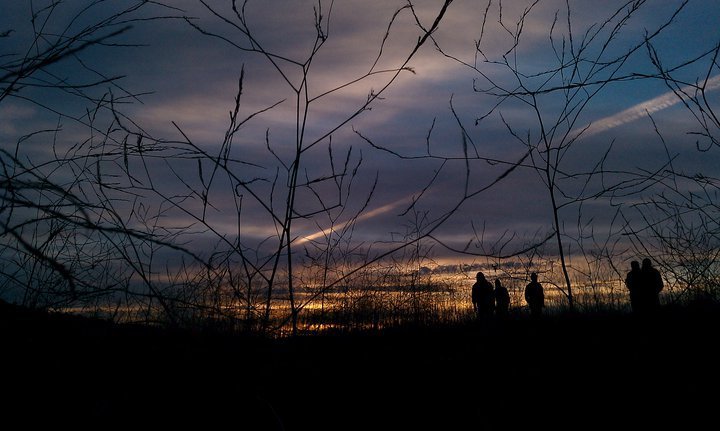 Lake of Blood’s debut full length As Time and Tide Erodes Stone is a two piece pilgrimage into the heart of nature. A snarling, unrelenting release that glorifies the cycles of life. A heavily cathartic voyage that chalks up glory and anger in equal amounts. Themes of nature, morality and existence highlighted by the development of a bands own take on experience. Light years ahead of its predecessor EP in terms of musicianship, aesthetics, feel and ideology – LURKER took time to converse with Haagr, Nordic, Samael and Krajavic and uncovered some experiences and ideas that have shaped the outfit. From tours and last-minute rehearsal recordings to the development of longer tracks and band-evolution.

– Why did Lake of Blood form? Is there a goal, or telos, you have set for yourselves?

The sole purpose behind Lake of Blood was a means to express ourselves in an aggressive and passionate way. At the dawn of the band, the material never formed intentions outside of making extreme music.

– Can you tell us about the development of the bands sound over the years? There seems to be a greater focus on atmosphere and track progression in more recent recordings.

The progression of the band has always felt like a natural process, though at moments has been filled and fueled by struggle. The band began with a concept of our former bassist. After he and our original drummer chose to depart from the group, we were fortunate enough to fill the void with musicians who were not only more skilled with their instruments, but also more aligned with the influences we were currently absorbing. As Time and Tide Erodes Stone is the first material to display a change in our song writing, choosing to breathe and bathe in longer, more vast sound scapes.This recording was the last time playing with former bassist and drummer. During this period of transition between members, material began collecting between both guitarists which embodies a definitive progression in structure and balance between dark and bright atmospheres. This material, which has been unveiled only at select rituals, is to be recorded as soon as time allows, but should be expected within the coming year.

– Tell me about the creation process behind ‘As Time and Tide Erodes Stone’. It must have been a much different process to ‘Heed the Primal Calling’?

Heed the Primal Calling was a juvenile creation between four individuals with a drive to create extreme music outside of the exhausted sounds which surrounded them in the summer of southern California during 2007. For some, it was the first musical endeavor, and for most it was the first to be taken seriously. The low fidelity of HTPC, mentioned often in the few reviews written for it, can be attributed more so to the individual who recorded the EP and his lack of experience and knowledge. The split with Panopticon was recorded soon following the release of HTPC. It was one song, that remained from the writing session of HTPC that didn’t fit directly with the lyrical concept of the EP. It was the first set of lyrics contributed by vocalist, Haagr, as well as the first recorded appearance of guitarist, Samael. The recording of As Time and Tide Erodes Stone was an entirely different experience indeed. It was the first collaboration with Erol Ulug at Hi-Octane studios. His patience, experience and advise is completely responsible for the quality of that record. We entered the studio as a group with tensions, being a bit under prepared. The long sessions that went into the recording were extremely valuable learning experiences. The recording we face ahead will no doubt be an entirely different experience as well, the interaction and life force of the band being now the healthiest its ever been. It will again be handled by Erol.

First and foremost, any inkling of such political agendas involved with this entity, is a misinterpretation, but something we welcome. Many having read the lyrics to the HTPC EP have drawn from it underlying messages that may not have been intentional on our part. Personally interpreting lyrics and music is something we greatly encourage and practice as all should, creating a greater significance. From our perspective, the lyrical content has always dealt with exploring the facets of human nature, the human mind, and beyond.

– Your music is littered with forays into a number of metal sub-genres. Do you derive influence from other areas of music, outside the sphere of metal?

Anything that reflects raw human emotion and invokes a sense of euphoria or discomfort: musical, chemical and ethereal.

-How was the recent US tour? How do the new, longer tracks translate in a live environment?

The tours we embarked upon this year were of polar environments, January on the East Coast and June on the West Coast. Both were experiences we will always cherish in our memory. In January we trudged knee-deep in snow with long time correspondents, and now valued friends, Seidr(featuring members of Panopticon, Wheels within Wheels and Below) from Louisville, KY and Falls of Rauros of Portland, MN. Having little expectations for our first real tour, entirely out of state, we were consistently pleased with the audience and their reaction to the new, longer material. Philadelphia, Brooklyn and Portland generated an overwhelming spirit.

June brought warmth and the lush green forests of the Great Pacific North West, equally as beautiful as the endless snow capped mountains we witnessed in January, this time accompanied by Vestiges of DC/WA state. Having talked only briefly with these gentlemen before climbing into a van for a two week together, the experience was nothing short of incredible. Our first time stretching our reach up the coast and beyond the national border, in Vancouver, BC was a great success, though guitarist, Samael was nearly denied entrance due to a DUI charge from 2007. This is something bands, if reading, should take note of. The Canadian border is rigidly strict if you have a criminal record. Access into the the country was achieved with a $200 fine, and was well worth the price. We were able to play for an amazing audience along with Tempest and Hagatha, local destroyers. Salem was a highlight of the trip, having stayed at the rumored Burial Grounds, home of avid musicians who operate Eternal Warfare and Woodsmoke records. Mania, one-man black metal project, performed in his quite unique manner, streaming the guitars and bass from a laptop into separate amps, while punishing his drums and wretchedly wailing. The following morning was spent within the damp basement of the Burial Grounds.

We granted the opportunity to record a rehearsal as best as we could with a very limited time frame. We tracked two of our new songs, first take for both and left it at that. Expect to see this surface as a cassette if you pay close enough attention. Our ritual which ensued with the incredibly cramped, pitch black room of the Witch House in Santa Cruz, CA was by far the most extreme display of raw human intensity we’ve ever been surrounded by. It was the closest thing to war any of us have experienced. The longer material we’ve come to find, allows us to easily become lost within the stream of sound, inducing a stronger trance state than we could achieve with prior material. It has drawn a greater emotional reaction from audiences, proving the American attention span is not entirely extinct.

– Nature and existence seem to play prominent enough roles in the style and feel of your music. Is this an important element to you, as individuals?

As individuals, Nature is of the most profound element to our existence. Everything we do is inspired by and at the mercy of the natural world, and inevitably is reflected in our music. Thoughts of existence and mortality are sewn throughout the music and lyrical content. The music is an attempt to achieve a balance, as in life, a spectrum of emotion, sometimes dissonant, negative, and filled with struggle, then at times euphoric, warm, cathartic, and empowering.

As Time and Tide Erodes Stone is available directly from the band through their Big Cartel page. Alternatively, a pay-what-you-want download from Lake of Blood’s bandcamp page is available too.