The important thing is this: to be able, at any moment, to sacrifice what we are for what we could become.

Order of Orias have come a long way since our interview with them last year. The development showcased here in ‘Bleak One’, taken from the upcoming album ‘Inverse’ through World Terror Committee, is a stone cast juggernaut of metallic might. Building manifold on 2009’s ‘Offering’ and ‘Birth’ EP’s sees a band developing an ideology that ‘naturally trends towards refinement, overcoming, and transcendence. There are many roads to take and the end goal is never as important as the steps you take to it’. This Australian outfit has been sharpening their craft since 2005, dragging their death metal heritage through the lattice of black metal to unleash a sound of unparalleled conviction and brutal aggression.

Stream ‘Bleak One’:
Order of Orias – Bleak One by LURKERSPATH

‘Inverse’ is ‘a shifting, untamable beast‘ that marks ‘a new stage in the bands evolution’ introducing a massive paradigm shift from riff based songs to fully formed convocations summoning the will to power: ‘the album is massive in terms of sound. It has an oppressive, all-encompassing feel that we’ve really tried to cultivate’. With hook-laden grooves packed back to back against soaring melodies, haunting arpeggios and blasting sections of form-fitting black metal – ‘Inverse’ is shaping up to be a contender for W.T.C.’s best release against last years stunning ‘Consolamentum’ from Ascension.

The sound wavers between ceremonial incantations and grandiose manifestations of will. Elements flow, push and strive forth without compromise. The atmosphere is gargantuan, and the band agree that their ‘sound has matured to a new depth. It has more feeling and scope than anything we’ve done in the past’. Inspiration for the debut full length has ‘come from movie soundtrack composers, such as, Clint Mansell, James Newton Howard, and Marco Beltrami. These have played a part in developing the more grandiose aspects of the album. There are also a lot of moments with real groove and feeling to them that can probably be attributed to bands like Shining, and Secrets of the Moon.’

With W.T.C., Order of Orias have found the best vehicle of delivery for their will-driven ascent of the underground ladder. The sound, feel and aesthetic of ‘Inverse’ stack up perfectly with the brooding might of Ascension’s ‘Consolamentum’ and this is no bad thing: ‘A friend of ours recommend we get in touch with WTC as he’d had some contact with them in the past and knew what the label looks for in a band, we sent a demo recording of some of the album tracks and from there things quickly moved forward. Working with WTC has been fantastic, complete professionals that do exactly what they say they’re going to. We couldn’t ask for a better label to handle our first album.’

‘Inverse’ is unleashed this fall through W.T.C. in both digi-CD and vinyl formats. Analogue fans rejoice, as the vinyl will come with a poster and slightly altered artwork. Keep up to date with Order of Orias via their Myspace page. 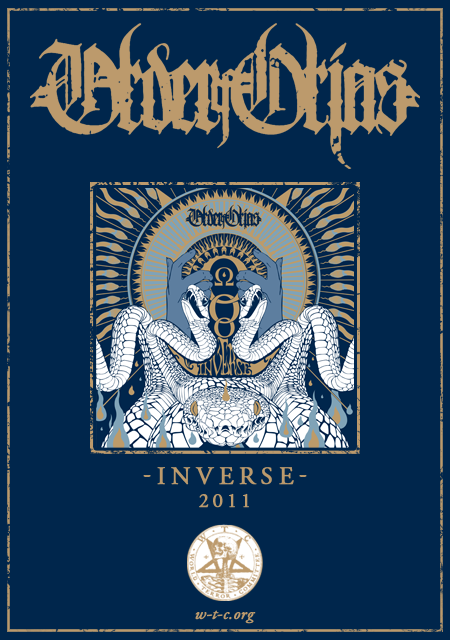