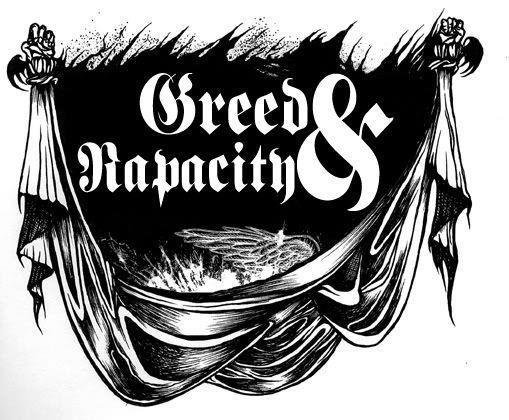 Greed & Rapacity stands at the nexus of forward-thinking black metal, funeral doom and ritual black ambient. ‘Loki Bound’ is a lesson in how to construct and execute extreme metal in the most organic sense of the word. For all the tiring and tested voyages into funeral doom territory, Geed & Rapacity seem to have regained the floundering flame of virulence once heralded by bands like Wormphlegm and transmuted this shapeless and uninspired genre into a beast entirely their own. Combining the somnambulism of better dark ambient acts together with the occult sensibilities of higher echelon black metal outfits like Deathspell Omega has paid off no end on this EP.

Twisted depravity is glorified at the altar. Swelling guitar passages hearken of ends unforeseen since the grandest proclamations of Thergothon. There is a delicate balancing of sound that pits the inherent nausea of funeral doom against the more graven outreaches of black metal. Single, atonal notes rise from the mire. Layers of possessed vocals extend from the abyss. A decimated order to proceedings tries furiously to pull itself from the fray. 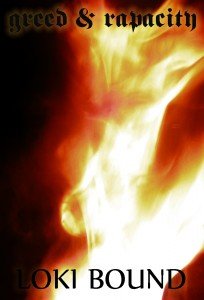 A constant war between worlds unfolds over the course of this thirty minute marathon that never relents on the listener. A sea of sickened growls, whispers and burrowing voice manipulation hides just beneath the morass of Loki Bound, weaving a heavy robe of occult texture. Greed & Rapacity wear this shadowy veil with pride, and rightly so, the music on display represents a band maturing beyond their contemporaries.

Greed & Rapacity collaborate from Portland, Oregon and Sydney, Australia. Their unique take on the hybrid shell of black metal, funeral doom and black ambient is fueled by a philosophy steeped in nihilism and existentialism. H. Lauer & D. Nahum are currently searching for an authentic, properly distributed label to handle release rites for ‘Loki Bound’. Contact with the band can be made here and through their Facebook page.

Loki Bound will see a limited cassette release through Milam Records. Only 100 copies are being made and a release date has been set for April 9th, 2012. Milam Records are currently accepting pre-orders for both this and Mare Cognitum’s ‘The Sea Which Has Become Known’ over at their Big Cartel store. Both come with a free digital download.