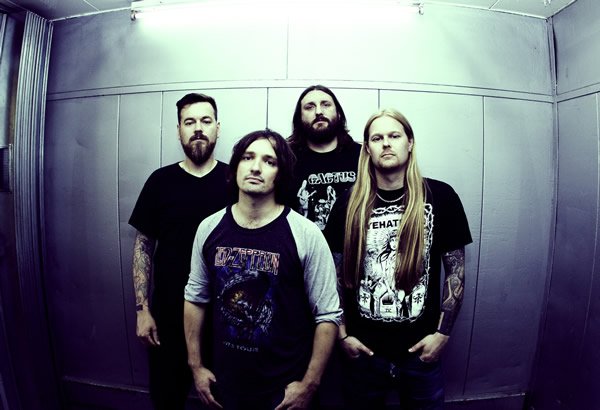 The weekend’s swag brought with it a host of fresh offerings from the top brass of the heavy metal underworld, including (somewhat tentatively) Alcest’s Les Voyages de l’Âme, The Thousandfold Epicentre by The Devil’s Blood, and the re-release of Enslaved’s breakthrough demo, Yggdrasill. But surprisingly it was Orange Goblin, a band that has lingered on the periphery since my “Kyuss phase”, who sneaked in on an impulse buy and ended up towering above the rest. Not only has their new album, A Eulogy For The Damned, reawakened a long-dormant yearning for gleeful, feel-good stoner rock, but it’s also demonstrated the infinite untapped potential of the traditional rock ’n’ roll format.

Memories of my brief flirtations with these London-based riff lords are patchy, but fragments from 2000’s The Big Black still faintly bounce around my skull. Despite hardly counting myself as a dedicated follower, what I do know is that Orange Goblin have been slogging away for almost 20 years now, gathering a rabid pack of red-eyed fans in the process, and this alone was worth swiping it off the shelves for. It’s been a long, consistent career and with this latest effort the Goblin shows no signs of slowing down any time soon.

Great stoner rock needs to make the listener feel as though the sky collapsing in an explosive psychedelic meltdown, regardless of whether they’re high or not. As mentioned, Kyuss were always a good litmus test for this. But Orange Goblin has refined these trippy soundscapes down the ages for themselves through a rapid-fire, open-string rumble; a deliciously down-tuned approach the band has firmly stamped its identity all over. This classic motif returns with rapturous effect on opening track ‘Red Tide Rising’, which can be streamed below. Never before have they sounded this heavy, driven, confident or at ease with their musical ability.

Because while A Eulogy for the Damned is one of the most crushing albums of the year so far, it is also steeped in A-grade songwriting channelled from the annals of Golden Age rock ’n’ roll. Of course, when mired in stoner/doom territory such as this, Sabbath still haunts every twist and turn of those sprawling blues scales, but the album also unashamedly steers into many a rousing and anthemic chorus, like Minor Threat butchering Mötley Crüe or Cheap Trick (‘The Filthy & the Few’, ‘Save Me from Myself’). Echoes of Thin Lizzy and Motörhead are also weaved in among the guitar mastery on display here, whipping tracks like ‘Stand for Something’, ‘Return to Mars’ and ‘The Bishops Wolf’ into a flurry of melodic detail.

The brilliant and varied vocals often carry the weight of the tunes, leaving the immovable bass and percussion sections to carve great technicolour passages through the stratosphere and beyond. As a result, this is – shock-horror – an incredibly accessible record, so leave your grim-kvlt-trve pretences at the door when sinking your teeth into this one. But fear not, O fans of heavy metal thunder, the Goblin has provided for you with the dense and delirious ‘Acid Trial’, the creeping doom of ‘The Fog’ and the occult whispers of ‘Death of Aquarius’. Basically, if you don’t enjoy this album, you aren’t to be trusted. Light that bowl!

A Eulogy for the Damned was released through Candlelight on February 13.