“Before this recording, we kind of had this internal rule when going to the studio that we couldn’t record anything that we couldn’t reproduce live. I don’t know why. Maybe it’s because of our punk/DIY background, but we were never really into over-producing records, and always wanted everything to sound as raw as possible.” 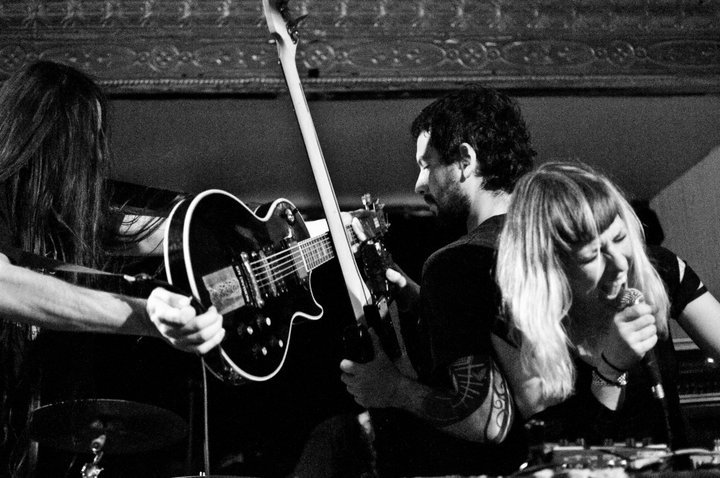 Shortly before the official release of Omens in the United States via At A Loss Recordings, Monarch embarked on a long European tour in support of the album, which attracted well-deserved praise from those drawn to their overbearing, ritualistic aura. As I reviewed Omens, I kept dwelling on an enigmatic presence within the album, as something about it struck me as foreign compared to earlier material. References to witchcraft, which were only hinted at in the past, are now fully fledged, and while their music may be hit or miss for the run-of-the-mill metal enthusiast, it has earned them a faithful following obsessed with their piercing, moody riffs and occult aesthetics. So I decided I would ask them directly about those influences, hoping to reveal more about the nature of this album. As you’ll soon see, bassist MicHell Bidegain had a lot to say on the subject.

In the review I wrote a while ago, I highlighted the amount of visual motifs related to witchcraft present in this album and the two previous albums, and how they’ve become increasingly prominent with each new release. Is this identity something you intend to project as a band from now on, or would you consider this was something that was always present?

I’d say there’s definitely a ritualistic aspect to our music, in the sense that by the means of loud amplifiers we do try to conjure mass-death and destruction. Monarch has always been a 13bpm black mass.

What inspired you to adopt the imagery now present in the band? Any books or works of art in particular?

Visually speaking, as of late we’ve been heavily influenced by eerie 70s French underground cinema, mainly by the work of Jean Rollin. There’s just something strange, poetic and fascinating about his visual work that appeals to us, and we thought it could work in a heavy music setting. There’s constantly this foreboding sense of doom and gloom, but with a dreamlike quality that we try to convey. This type of cinema definitely also prompted a change in our sound, by working more on sound textures and narration in our “songs” to try to give them a more cinematographic dimension.

Omens is an atypical album in terms of production, as it was recorded in several locations at different times. Tell us about the process.

The actual result of the production process of Omens as a whole stemmed more from necessity than, say, a pondered decision. When writing and recording this album, the band members were living in four different countries on three different continents, so we couldn’t meet up every week for band practice. Our only option was basically to write and record while on tour. So we met up in Japan, and spent all of our time off from tour living in this club called Hokage in Osaka, owned by Shibata from Birushanah. We’d wake up, write/practice until bands came in for soundcheck, then we’d go out and hit the bars until the concert was over, get back to writing/practicing, sleep, and start over. It was intense but so great being a million miles from home in a city as cool as Osaka, totally submerged in the creative process. So we wrote the instrumentation in Japan, then recorded drums and percussions with Hironori Ochi in Kakurega studio in Osaka. We then recorded basic guitar and bass tracks a few weeks later with Neil Thomason in Melbourne at Headgap Studios while on tour in Australia. Emilie recorded part of her vocals with Matt Cartman at Crane Studio in Montréal, where she was living at the time. We then went to Chicago with Emilie to finish some guitar overdubs as well as vocals with Sanford Parker, and mixed the album at Engine Studios with him. All in all, I think it made for a very interesting experience, and have great memories of all of the steps involved in making this album.

I also noticed there’s a big line-up involved in this record, with people like Eric Quach from Thisquietarmy, Atsuchi Sano from Birushanah, and even Robert MacManus (former Grey Daturas member, of which I’m a big fan), among others. What was their involvement in this new album?

When writing the new album in Japan, we were on tour with Birushanah, which is this awesome heavy band with killer make-shift Japanese percussion. So we were working on this song, which would become ‘Blood Seeress’, and while brainstorming in a bar we had the idea to ask Sano, the percussionist from Birushanah, to play on our song. We asked him and he was totally up for the idea, so we worked on the song with him playing his crazy percussion over the track for a few days before recording our drums and his percussion. Robert Macmanus, who actually used to drum in the band, laid down some killer heavy distorted noise tracks on guitar while recording in Australia. Our friend Eric from Thisquietarmy was kind enough to write what would become the Transylvanian Incantations interlude for us, on which Yailen from Ensorcelor and Jeanne from The Sparteens did vocals for. Fun fact: no one from Monarch is actually on that track. 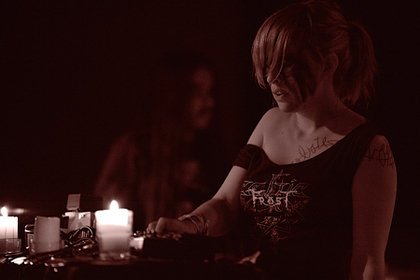 There’s a noticeable difference between Omens and your previous albums: a faster tempo, more background elements, a more diverse range of vocals… What prompted this musical evolution? Are you satisfied with the results?

Simply put, when we wrote and recorded this album, we all had a better idea of what direction we wanted to take. We obviously wanted to write a heavy, dark album and all had different ideas we wanted to incorporate into this album. Emilie, for example, had been working with an array of delay/reverb/echo pedals in a live setting, and wanted to work more of those noisy elements into the new material. Maybe in a sense when recording this album we were all a bit more mature sonically speaking, and were willing to be more open about production ideas. Before this recording, we kind of had this internal rule when going to the studio that we couldn’t record anything that we couldn’t reproduce live. I don’t know why, maybe it’s because of our punk/DIY background, but we were never really into over-producing records, and always wanted everything to sound as raw as possible. But I think on this recording we found a middle ground that works for us between the raw, dirty, crusty aspect of the band, and the more produced elements in the mix.

In terms of lyrics, would you say there’s an evolution in that department as well? From what I could interpret and compare between Die Tonight (my personal favorite) and Omens, it seems to me that Omens is way more vengeful and angered in tone, whereas Die Tonight felt anguished and tortured (perhaps aided by the fact that it had a slower tempo) but, nonetheless, I hear and feel something different in Omens. What is it that distinguishes this album from your previous releases, in this aspect?

Lyrically speaking, I think the difference between Omens and our previous albums is that with this album we wanted to use the vocals more like an active statement, something more along the lines of an invocation. On previous recordings, such as Die Tonight, the lyrics related tales of anguish and despair, with the protagonist being crushed and victimized. On Omens, on the other hand, the lyrics are more of a summoning, with the protagonist taking total control of the death and destruction surrounding her, basically creating blackened chaos.

How do you feel Omens has been received in the metal community so far?

Surprisingly, for the moment, the album has been received very well. But don’t get me wrong, we’ll always be one of those bands people like to hate. 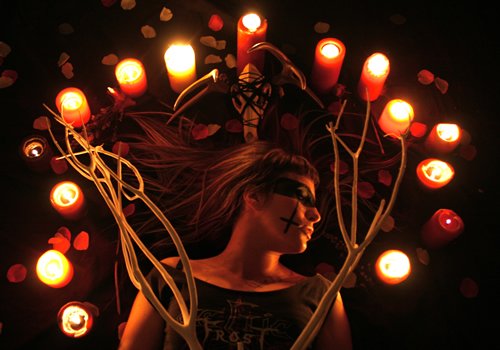 How do you, as a band, perceive the issue of piracy in this decade? This year has been very controversial in that aspect, seeing as several direct download servers have been closed or limited, and new laws have surfaced under the sake of preventing piracy, which have been met with scorn from the users.

Honestly, I’m 100% for the free circulation of information, be it obscure black metal demos, suppressed government documents or the latest retarded blockbuster action movie. When it comes to music, at least with underground music, I like to think that if people really enjoy your output, they’ll buy a physical copy, or attend a show if the band is in town. It’s lame to see things in monetary terms, but these are the little things that help an active underground band to strive, because nobody is making money here, just having the means to be able to continue is already a success. I really don’t think that piracy is killing the world of music, at least not underground music, I just think that the musical landscape is changing. So many more people have access to your music, thanks to download servers and file-sharing sites. If you’re doing something worthwhile, I think this is a good thing, and this will all eventually balance itself out.

What has Monarch been listening to lately? Any favorite albums from 2011? Have any of these albums had an influence in Omens?

I’m also very interested in knowing about the band’s literary habits. Have you read anything worth mentioning lately?

Anything you wish to add?

Listen to Wizards of Firetop Mountain.

Omens can be purchased on CD via At A Loss Recordings’ Blue Collar Distro page, and there’s an LP version coming out soon. For more information, visit Monarch’s Facebook page or check their Twitter account (@xMONARCHx).