“Other people’s nighttime would be our daytime; we would be doing things when everyone else was asleep. And we brought that idea into our music as well, so that we were almost pushing ourselves into the dreamtime and into the unconscious.” – Rob “The Baron” Miller 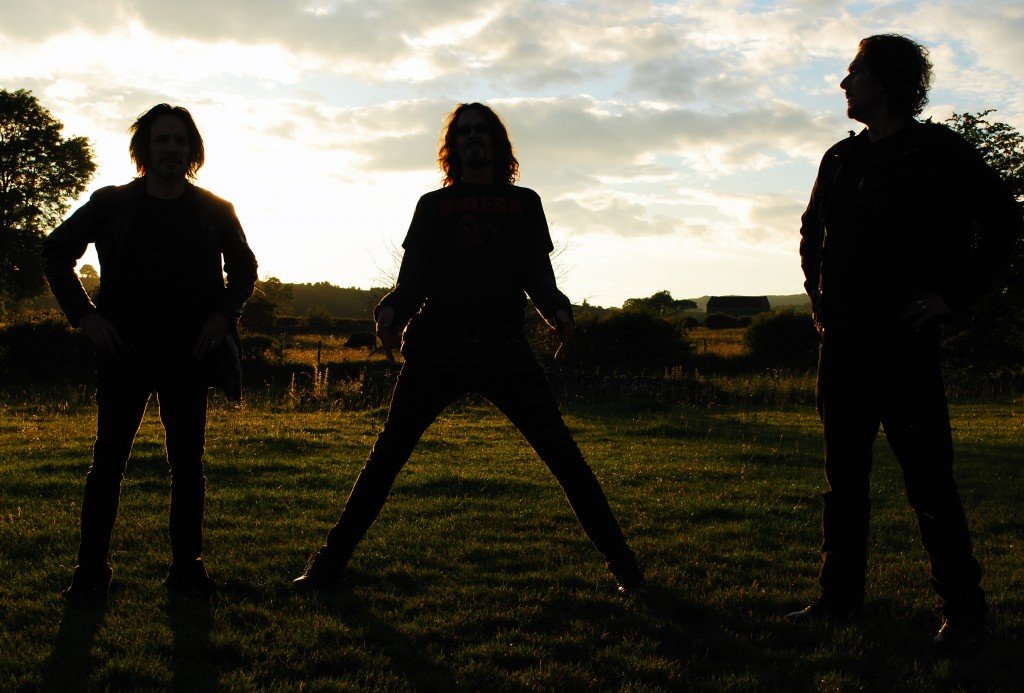 In Part I of this interview, The Baron and I talked about Amebix’s bastard descent from non-metal sounds such as gothic post-punk and 70s prog. Understanding this diverse musical ancestry is crucial to understanding Amebix, but it’s not enough. Like Throbbing Gristle, Crass and Death In June, Amebix have always been more than a music group. Their songs are the core of a broader aesthetic project, a “world” opened up through a wealth of symbolic reference points. So, I’m especially interested in the esoteric ideas and extreme experiences that have helped shape Amebix. In a way, that’s what I’ll be focusing on in the next two parts as well.

Here, we discuss mind-altering sacraments, cryptic rites, and ancient tomes. If there’s one thing that struck me about this part of the conversation, it was Rob’s sense that there is real continuity between what he does now – both in the music and at the forge – and what he was after in the earliest days of Amebix. He is profoundly oriented, in a way that the world continually tells us is impossible or undesirable. While many rock legends embody the crisis of the postmodern subject, continually re-inventing themselves or groping desperately after the chimerical promise of Authenticity, The Baron confidently pursues a unified life-work. 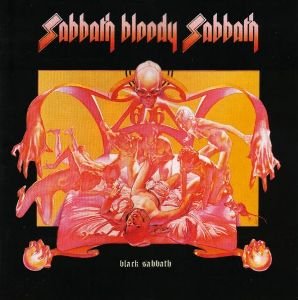 In the recent Amebix documentary, Risen, Stig mentions dropping acid and listening to Sabbath. Did LSD have much of an influence on what you dudes were doing in Amebix? And what was it like to be taking that stuff in the least hippie environment imaginable, a Bristol squat house?

There was a time when we were kind of blissfully unaware, the first couple years of living in Bristol. After the riots things were fairly open there. But then it became fairly sinister. We were dealing acid and various other different substances, so we tended to take a lot of stuff. I wasn’t a big druggie myself. My drug of choice was mainly amphetamines because I found that opened up a lot of positive energy for me: It made me write, it made me think about music, it made me stay awake and stay focused. So yes we did take acid, and I would say that with some of the music I was into to at that time, tripping turned things around a little bit. Killing Joke were always a very intense band. Hearing Killing Joke on acid, you could kind of understand where Jaz Coleman was coming from. He’s got a very primal connection, that guy, and as a consequence he can be a bit unhinged at times, but there’s some genius there.

And as for listening to Sabbath, particularly the one album Sabbath Bloody Sabbath… I’d listened to Sabbath before but that’s the album that turned me on to them, and that’s probably because I was taking acid at the time and I saw a lot of stuff in there. And like we do when we’re younger, I read a lot into music and lyrics. It was a personal disappointment to me to find out that Ozzy never wrote the lyrics to any of the Sabbath stuff. That didn’t come out until fucking 2005 or something like that, and I was shattered by it. I thought Ozzy was this lyrical genius with an innate occult understanding! There are all these things you give bands when you’re younger that aren’t necessarily there. It turns out that Geezer Butler is kind of the silent genius behind some of the lyrical ideas of Sabbath, and some of them are understatedly brilliant.

I think ‘Paranoid’, for sure!

Yeah, and I think ‘Killing Yourself To Live’ and a lot of the stuff off Sabbath Bloody Sabbath is amazing. But yeah, as I was saying, we take substances when we’re growing up in order to understand music, but we personalize it to such a great degree, we take that stuff in and we think we understand what that person was trying to say. The cold, awful, harsh reality of that is sometimes there’s a guy sitting down there in a studio trying to write some lyrics – quickly – to a riff they just put up on tape, you know? And that’s awful, because I’d really like people to be spending more time thinking about what they’re doing lyrically.

So, speaking of Sabbath’s occult tendencies and Jaz Coleman’s primal connection, what kind of role does pagan spirituality play in your life now? In the documentary you referred to yourself as a “second or third generation pagan”, and I was wondering how that came about. Were you born into a family where this was already an interest?

Not a problem, that’s something that Stig did say. I’d say we were brought up in a family that was very, very open about discussing ideas, and I’m very thankful to have had that space. I wouldn’t say agnostic, I wouldn’t necessarily say pagan, but I would say open to a lot of influential streams. So no, not to contradict my brother where that’s concerned, but there’s not directly any kind of lineage there.

So how did you start getting into that sort of thing amidst the hard-bitten, rather narrow-minded “realism” of kids on the punk scene?

The big shift occurred, really, before we got to Bristol, when we moved in with Martin at the Glebe in Dartmoor. The most significant thing about that was that we changed the way we were living quite profoundly, in that we started to have this nocturnal existence where we would read, talk about ideas, and listen to music completely out of step with everything that was going on around us. Other people’s nighttime would be our daytime; we would be doing things when everyone else was asleep. And we brought that idea into our music as well, so that we were almost pushing ourselves into the dreamtime and into the unconscious. That was the most influential factor. I don’t think that going to the city and getting involved with other bands was going to change that at all. We had already been stamped with a particular identity. We had already been in-formed with the message that we needed to put across, and it was just a case of working out in what way we were going to be able to do that.

I still feel that connection with that time back in Devon, because I don’t think anything has actually changed. A lot has gone down and as individual people we’ve changed, our lifestyles have been turned around 180 degrees, but: The actual center of things is still very much there. I still recognize it and I still know that it’s there, and it’s what I refer to in the liner notes of the last album as being “the well,” that place where you go back to, and you realize it was there all along. You just come back there and you go “Fuck, great! It’s still there!”

I’m also really curious about your reading – the works of literature and poetry and whatnot that have influenced you, as well as things you just enjoy. So, to start with, what were you reading in the manor? I’m pretty sure you were reading Crowley…

Yes, but I wasn’t personally so much interested in Crowley. Stig was, and so was Martin –

Martin was really into Crowley, right?

Martin still is, indeed. He’s been doing a lot of quite interesting artwork, but he’s still pretty much spun out.

So him and Stig were doing that… I came up with Colin Wilson and The Occult, reading books that would get you involved with the mysteries without directing you down any specific path. It wasn’t until I came to Skye that I had time to sit down and start to look into particular areas… I got quite involved with Neoplatonic philosophy for a while, people like Giordano Bruno, some of the Gnostic texts and the hermetic things, and that led me towards alchemy. It’s this offshoot that’s always been considered eccentric, the pursuit of something that was ethereal or unreal. But I was also getting involved with Jungian psychology, and Jung had become quite interested in alchemy towards the end of his life. He realized that the alchemists were talking in this medieval metaphorical language about the same things that he was trying to push across to people in terms of the unconscious. Things started to make sense, things started to patch themselves together. I branched out and I read a lot of stuff. 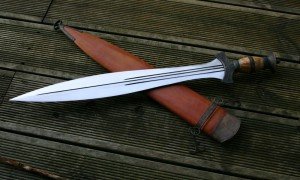 Has the work on alchemy influenced your smithing at all, or changed the way you think about it perhaps?

Well…  It led to me being a smith, really. You’re working with all four elements, so it’s the work that involves everything. Earth, fire, air, water: They’re all involved in what you do as a smith. When I initially got involved with it, it required a great degree of concentration, and I had a freedom to work magickally as a blacksmith. These days I work for a living as a blacksmith, and it’s very seldom that I have the opportunity to go back to those roots and manifest things through fire and hammer, you know?

What sort of fiction have you read? I’ll just throw some things out there – have you read any of the old epic poetry of England, like Beowulf or The Green Knight?

I got involved fairly heavily in reading the Arthurian mythos, and that went from Tristan and Isolde through the Morte d’Artur and eventually the poetry of Tennyson, which is a reflection on that. So the Arthurian cycle influenced me very, very heavily in the work that I do. There was a response there. It gave me this idea of carrying on what I had dropped musically, and helped me find another way of understanding that.

So, was there reading you’d done as a teenager or young adult that influenced you when you were in Amebix, or was that a more free-flowing thing?

Yeah, more this and that, the things that you pick up when you’re a kid, you know? On the one hand it would be fanzines exhorting you to go form a band and play three chords, on the other hand it’d be The Illuminatus! Trilogy or something like that. As a band we were always very interested in esoteric matter as well as the more day-to-day stuff, so we were dealing with things on the street, on the level, but also trying to manifest things in a spiritual sense.