“Perhaps we need some outside universal threat to make us recognize this common bound. I occasionally think how quickly our differences worldwide would vanish if we were facing an alien threat from outside this world…” 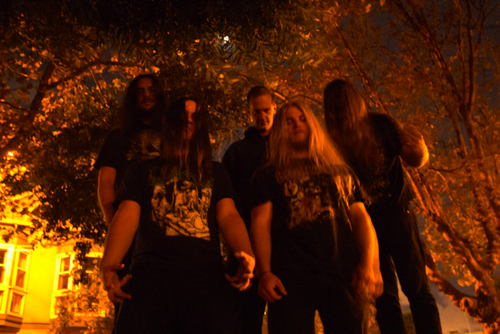 Perhaps the best thing about living in the cultural melting pot of the San Francisco bay area is experiencing the labyrinthine musical landscape shaped by the cross-pollination of ideas and philosophies. From the noise-driven, raw black metal of Sutekh Hexen to the laser-precision death metal of Severed Savior, there is so much artistic variety that it’s easy to get lost in it all. Psychedelic warriors Apocryphon are well on their way to walking among the greats, with a volatile mix of brutal death metal and harsh noise that separates them from the Golden State’s swarm of slam death and retro thrash bands. Off the back of a successful West Coast tour culminating in a hometown show with Dead Congregation, I sat down with Apocryphon in their Oakland practice space to discuss their influences, philosophies and plans for our unsuspecting world.

Explain how Apocryphon was birthed. What is your mission statement? What do you hope to achieve with your music?

Shelby (guitars/vocals): We do not have a mission statement per se; we just strove to write some brutal music with some substance behind it. As far as how Apocryphon formed, Jason and I played in a band called Cretaceous together, which is now broken up. I had known Peter for a while through his noise projects, and he introduced me to Mike at a Venomous Concept show. Our first guitarist was named Caysen, but he was soon replaced by Kenny.

Apocryphon is a Greek term for “secret writing”. Specifically, it is a term used to describe Jewish and early Christian texts that could not be publically taught. What prompted you to choose this as your name and how does it relate to your music?

Shelby: Put broadly, Apocryphon simply means secret teachings, yes. Conspiracy theories as well as other obscurities are the prevalent theme in our music. ‘Hidden Altars’ is a perfect example of our fascination with conspiracy theories. It’s about Project MKUltra, which was an illegal human research program on behavioral modification and mind control run by the CIA from the 1950s to the 1970s. Throughout the duration of these experiments, unwitting civilians were subject to hypnosis, sensory deprivation, isolation, and were administered psychoactive drugs such as LSD. In CIA trauma-based mind control lore, they refer to the hidden parts of the brain as “altars”. These are certain areas of the brain which can be activated by code words and substances, so it’s not merely referring to an altar where one performs a ritual, but to the untapped levels of our consciousness. Finally, the selling point of choosing Apocryphon to be our band name was that it was unused when we looked it up on Metal Archives!

Speaking of LSD, psychoactive drugs as well as other psychedelic concepts such as “the third eye” are another prevalent theme, as evidenced by song titles such as ‘Bad Acid Baphomet’ and ‘Synaesthesia’. Explain the role that psychedelics play in your music as well as your personal outlook on life.

Shelby: There’s a lot more truths to psychedelic experiences than most people admit to themselves. Primarily, it opens up a lot of doors within the mind that should indeed be opened, because we are granted the opportunity to go far beyond the trappings our daily existence. In no way does this mean that we are running around tripping on acid every day, but we believe it allows one to become more in tune with oneself than previously imaginable. Lyrically, psychedelic concepts are something I’m very interested in, much like conspiracy theories. Synaesthesia is a neurological condition that allows for someone to see sounds, hear colors, etc. In the song itself, it’s about a man being driven to murder as a result from said condition.

Peter (vocals/noise, samples): It’s a strange dynamic, we take psychedelics very seriously, but Shelby and I in particular share a strange humor on the subject. We have both lived in Humboldt, and the culture of psychedelic experimentation has always been in full force. However, being surrounded by hippies, burners, and 420 t-shirts all day make it easy for us to sort of poke fun at that culture as well. 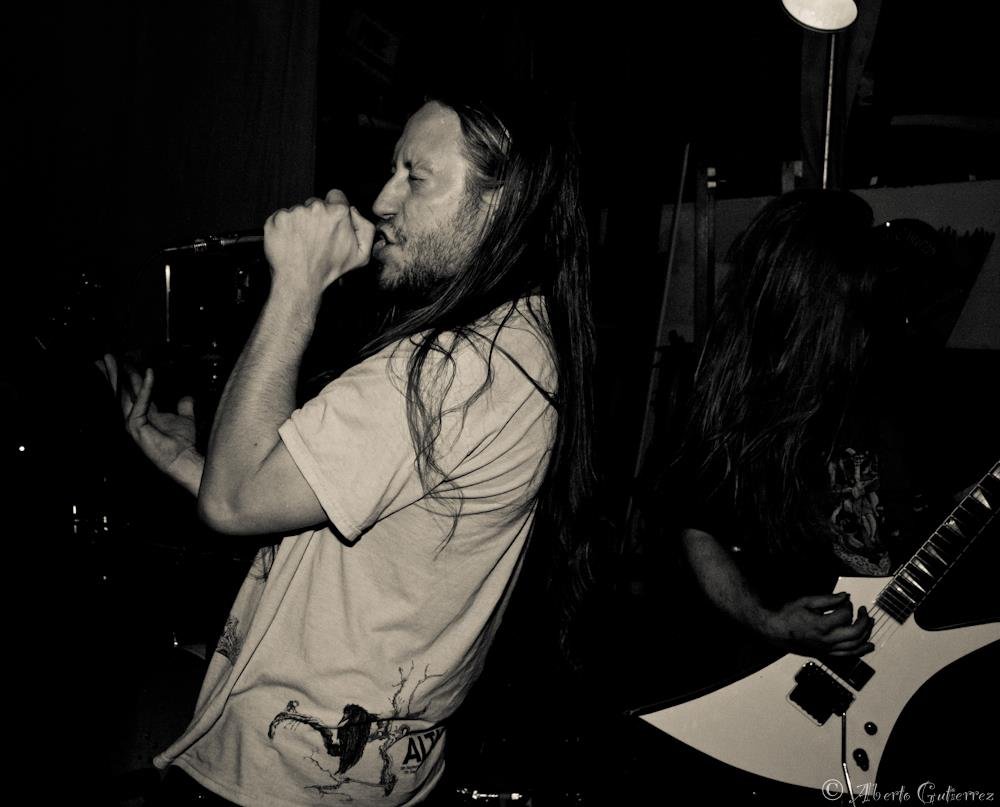 What is your opinion on the current state of death metal? In recent years it seems there have been definite rise in retro acts as a result of the Brain Drills out there, but this resurgence has caused definite lines in the sand between said retro bands and the Ulcerates of the world. In addition, what do you think of the Bay Area metal scene as it stands today?

Mike (drums): There is a definite resurgence, and like you said the Ulcerates as well as other bands that do their part to keep the genre interesting are killing the Incantation worshippers that populate the scene.

Shelby: There are some good Incantation-worship bands, but a lot of those bands are frankly boring. I feel that Apocryphon straddles the lines between the many subgenres of death metal, where we blend old school and modern technical approaches as well as myriad outside influences. However, people are so picky about what subgenre you are that it sometimes alienates us to a point where we are viewed as the odd man out at shows because we aren’t a slam band nor are we a retro act.

Peter: In regards to the Bay Area scene, I believe it is one of the best in the nation if not the whole world. Hazzard’s Cure, Fabricant, Embryonic Devourment, and Owl are all great bands that are helping the scene flourish.

Shelby: Some people believe that The Pound closing dealt a blow to our local scene, but I disagree. If anything, it created problems for the major touring bands, but there’s always been the Oakland warehouse scene that allowed the smaller local bands to tear it up. The Pound closing was not a curse upon the Bay Area, if nothing else it inspired bands to put on their own shows.

Mike: Whore For Satan Productions definitely stepped up to the plate when it came to putting on local metal shows at other small venues such as Thee Parkside and DNA Lounge.

Jason (bass/vocals): Shelby brings a song in, we pick it apart, drive each other fucking crazy, break up, and write the thing. Seriously, though, Shelby brings a lot of the songs to the table, and we individually put our own spin on it, while keeping it somewhat close to the original idea. There are a couple songs that Shelby brings in that we like right out the gate like ‘Synaesthesia’. 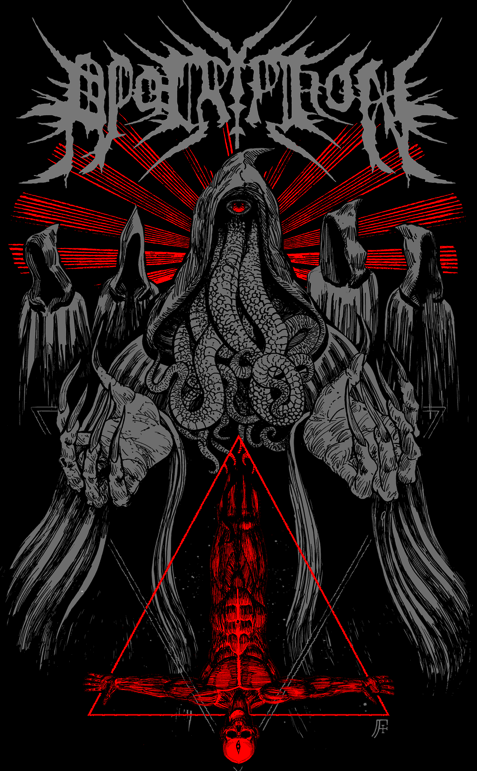 With the exception of modern-day Pig Destroyer, I’m hard pressed to think of many other death metal bands that incorporate noise into their sound quite like you do. Specifically in your live show, Peter mans the console to create sounds instead of having the sound guy simply play a tape of samples. Explain how you guys meld noise and death metal.
Peter: From the inception of the band, that was something that I was definetely interested in. I was doing noise projects under my own name as well as another project under the moniker Connector. I was interested in what Shelby and Jason were doing in Cretaceous so I strove to do a project with them. As a fan of experimental and harsh noise such as Wolf Eyes and Hair Police, I was frankly surprised that there was such a dearth of bands that were cross pollinating extreme metal and noise.  I feel that as a band, we have lots of room to explore as we blend together our influences. The songs on the self-titled EP were already arranged for the most part by Shelby, so we fit the noise aspect around the already composed songs. What we have been working on as of late we feel combines the harsh noise and death metal more seamlessly than before.

Describe the recording process for your self-titled EP.

Shelby: We recorded the EP at Lennon Studios SF with our good friend Jeff Leppard, who recently passed away. It was a fairly standard recording process, and I really enjoy his work and had an amazing time working with him. Jeff also recorded our split with Fabricant, and right now we are in the process of looking for a label to put it out. Again, we are pleased with the sound we achieved for the EP. An organic sound that can be recreated live is what we strive for, and we avoid splicing together recordings on a grid to create the song. Due to the advanced recording technology that is available today, the grittiness that gives metal that edge can be lost. Hell, we played with a black metal band on our last tour that used trigger pads instead of actual kick drums.

Shelby, you run Illogical Contraption. What is your view on the age old argument of piracy, and the future of the recording industry?

Shelby: We are at a point where buying CDs is an obsolete idea, and the only way to really make money off of playing music these days is simply having a product that the fans want to buy, whether it be shirts, posters, or having an interesting style of packaging for the physical copies of your music.

Peter: I feel strongly about this topic as well. Whether you like it or not, the reality is your music will be shared over the internet so that forces the artist to be creative with the merchandise made available to their fanbase. Our EP is in wooden packaging with a silk screen logo, while the inner sleeve features collage artwork courtesy of our good friend Matt Parchinski. All the music is made available on bandcamp, so come experience Apocryphon in a live setting!

Plans for the future?

Shelby: First and foremost, our plan is to release the split with Fabricant and continue to search for a label. We are also compiling material for a full-length as well. As for touring, we plan on making a run of the East Coast hopefully in the near future. Going to Europe is the ultimate plan for us, though, as touring overseas is a neccesity for a band to establish itself.

Advice for the kids?

Peter and Shelby: Move out of your shitty town! The easiest way to get your band going is to immerse yourself in an environment with like-minded musicians. And of course: do more mushrooms.